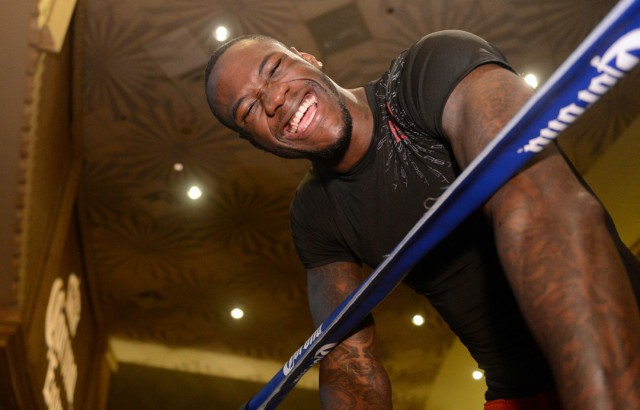 Wilder fights Eric Molina at the Bartow Arena in Birmingham, Alabama on June 13

IT’S definitely a blessing to be able to fight in my state. When we set the goal to be heavyweight champion of the world that was one of the goals we set, to bring it to Alabama. Just to change it up and give Alabama some spice besides football, and to finally get the opportunity to have a major fight in the state of Alabama. This is what we were looking for when we worked to bring the commission here, and we were successful and got it done. This is what we were looking for.

I want Alabama to be my home territory. It’s why I stay here. Some people still try to throw me out but my heart is here and I’ve got bigger and better plans. This is just the beginning.

My team handles all the distractions (from fighting at home). I’ve got a wonderful team. I’m just ready to go. I’m ready to get this party started and welcome [Eric] Molina to Alabama.

My hand is fine.  We tested it yesterday for 10-ounce gloves because that’s the competition weight. We put it on and I felt great. It gave me even more confidence. I’m ready to get in the ring and do what I have to do and perform for my people.

On being world champion

We knew we would be doing a lot of traveling after getting the belt but we didn’t know the capacity of how much. It’s been a journey for me.

I think I bring a different flavor to the sport of boxing, and I want to bring even more to the world.

I haven’t heard from Molina but that’s good, that means he’s focused. I want him to come very focused. I know he’s going to be nervous and scared, but they say if you back a rabbit in a corner, they fight back.

I’m most dangerous when I’m at home. I’m not going to let down my home crowd and let someone take what I’ve worked so hard for. He’s not going to come behind enemy lines and take anything from me.

I want a great performance from him. I want a great performance for the crowd and people to say, ‘Hey, I want to come back for the next one!’ and to be hungry for the next one. We got a lot of fights we want to do in Alabama, and this is just the start. I want to move on from Bartow to the Birmingham Jefferson Convention Complex (BJCC), which is bigger than the MGM Grand.

Every title defense is proving something. I’m the world’s most wanted, and everyone wants it. I’ve got the WBC crown. It’s the most well-known, famous belt in boxing. Everyone wants their name on this belt, and I have it. Every fight is a dangerous fight when I’m putting the belt on the line, and I train as if everyone is a world champion.

My last fight I proved to everyone what I was capable of. I can go 12 rounds and take a punch.  I can be just as fresh in the 12th round as the 1st.