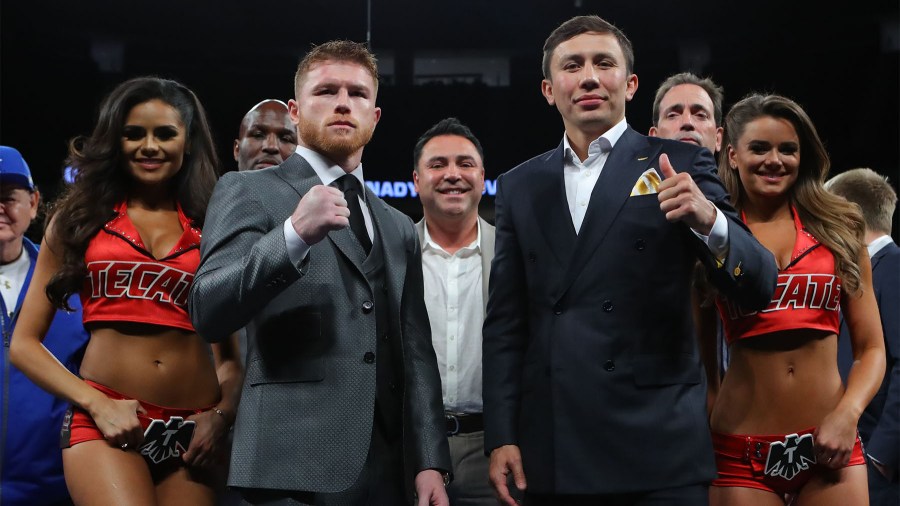 Lee Gormley on how Canelo Alvarez vs Gennady Golovkin was made

Golden Boy Promotions had promised fans a Mexican barnburner on the country’s traditional holiday weekend in Las Vegas, but instead what occurred was a massively one-sided shut-out in favour of the organisation’s leading light Canelo.

Following 12 comfortable rounds for the fiery-headed Mexican star and three identical judges’ scores of 120-108, it was the announcement of his next outing against unified middleweight kingpin Gennady Golovkin that drew the biggest roar from the thousands in attendance.

“Golovkin, you are next, my friend. Where are you? It’s on,” Alvarez declared before ‘GGG’ was ushered into the ring alongside his trainer Abel Sanchez and promoter Tom Loeffler.

On September 16 boxing will finally see the fight it has been screaming out for for many years, as Canelo and Golovkin now prepare to lock horns in respectively their biggest career tests to date.

Golovkin’s promoter Loeffler has been working tirelessly for some time to oversee fight negotiations finally come to a successful conclusion.

The American told Boxing News that the bout was finalised after he got back from the recent heavyweight clash at Wembley in London, while he also admitted that ‘GGG’ would have faced Chavez Jr at 168lbs instead if the latter had overcome Canelo.

“The fight was finally made just this week after I got back from the Anthony Joshua versus Wladimir Klitschko fight,” he stated.

“But the Canelo fight wasn’t set in stone, [Golovkin] would have fought Chavez Jr at 168lbs then [if he won].”

Loeffler is pleased to see such a mammoth bout ultimately agreed and is expecting the super-fight to live up to all expectations come September 16.

“It’s what we have worked so hard for the whole time for the last five years,” he continued.

“Fans can expect lots of excitement between two guys who don’t go backwards.”

“I would agree [with De La Hoya]. With the two massive fanbases that Canelo and ‘GGG’ both bring to the sport of boxing, two of the most marketable athletes in the sport, both in their prime, it is very rare that we see a match-up like this in boxing.”

Alvarez’s lopsided unanimous decision victory over his compatriot and long-standing rival Chavez Jr was merely a stepping stone towards September’s imminent blockbuster, as he made easy work of the son of Mexico’s greatest ever fighter Julio Cesar Chavez Snr.

Both men will enter the ring on Mexican Independence Day this year on the back of unanimous points successes, with Kazakhstan bulldozer ‘GGG’ having previously outscored Daniel Jacobs to retain his titles back in March.

Such an outing saw the now 35-year-old taken the full 12-round distance for the first time in his devastating career, ending his rampant 23-fight knockout streak which impressively dated back to November 2008.

Next up is the big one. It previously looked likely that this agreed mega-fight would be further delayed and left to marinate until Golovkin was nearing the latter stages of his career, as the opposing sides were seemingly stuck in a contractual stalemate.

But September 16 is the date that boxing fans and everyone involved in the sport will have already pencilled into their diaries with excitement and expectation, as the pair get ready to square off for middleweight superiority.

The build-up has already begun and no time was wasted as the first fight press conference and face-off took place in the aftermath of Canelo’s embarrassingly routine triumph over Chavez Jr.

With a host of top drawer bouts having already taken place over the last few months, most notably the heavyweight slug-out between Anthony Joshua and Wladimir Klitschko, 2017 is proving to be a colossal year for boxing. Long may it continue.