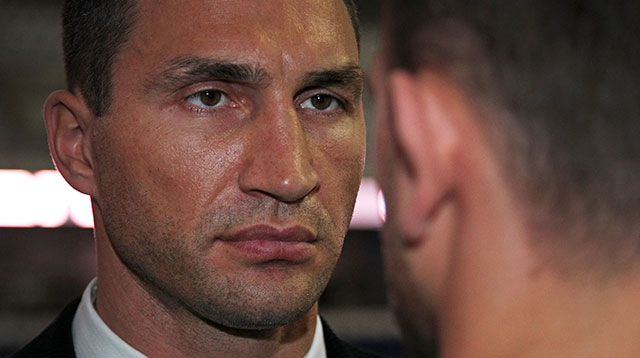 THE manager of world heavyweight champion Wladimir Klitschko, Bernd Boente, is still trying to find a suitable challenger to face the Ukrainian at the Barclays Center in Brooklyn, New York on April 25. Bryant Jennings, Shannon Briggs and even the Bermane Stiverne-Deontay Wilder winner have been rumoured, but if the right opponent cannot be finalised soon that date and location will be in jeopardy.

Unbeaten Philadelphian Jennings, 30, was the original target but an agreement between the parties has not been reached.

“At the moment we are far away from finalising anything,” Boente told Boxing News. “Bryant Jennings was the first choice. He was. But at the moment negotiations are stuck a little bit.”

Comebacking veteran Briggs, 43, has been infamously clamouring for a shot at Klitschko since he returned to boxing last year. The former WBO champion – the last American to hold a major heavyweight belt – has not beaten anyone of note during his six-fight return but has secured a Top 10 ranking with the WBA, making him – on paper at least – a viable choice. Wladimir is not thought to be keen on facing the man his brother, Vitali, hammered to defeat in 2010 but Boente refused to rule out ‘The Cannon’.

“At this moment it could be anybody who is available and would be okayed by the relevant TV stations meaning HBO in the US, and RTL in Germany,” Boente said about Briggs’ noisy application. “But I can’t discuss all the names. You know the business – it automatically means the purse goes 50 per cent higher.”

Boente insisted Team Klitschko are not waiting to see what happens in the January 17 WBC showdown between Stiverne and Wilder before making a decision on the next rival. Klitschko has made no secret of his desire to fight for the green belt but it would seem that April would be too soon for what could be a massive event.

“That would be [too] far away now,” Boente replied when asked if the Stiverne-Wilder winner could step in and face Klitschko. “It is more or less two weeks away. We hope to have an opponent in place by then. We still want to hold that date in New York but we have to see. If it can’t be worked out maybe we would have to move it back to Europe, or even move it back later, and then anything is possible.”

SUBSCRIBE TO BOXING NEWS – your loyal boxing companion since 1909