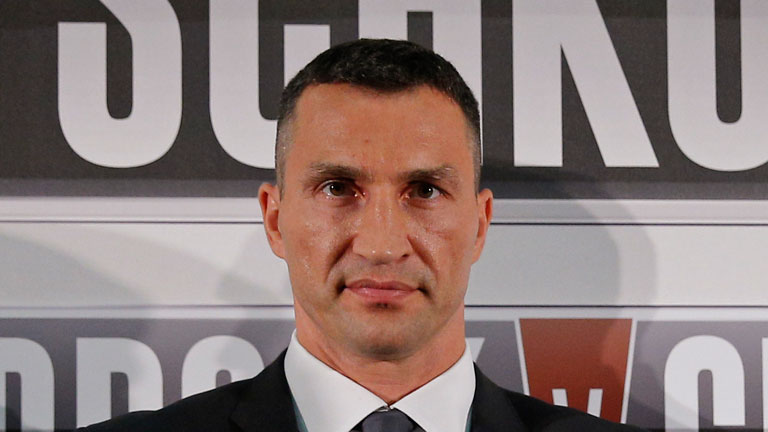 Wladimir Klitschko has only picked up a 'minor' injury

WLADIMIR KLITSCHKO is eager to fight IBF world heavyweight champion Anthony Joshua in the spring of next year after a proposed December 10 meeting fell through.

Reports emerged yesterday claiming Klitschko will not box in 2016 due to injury. His manager, Bernd Boente, has confirmed that the former heavyweight ruler will not fight for the rest of the year but disputed claims it was through injury.

He is still working with Joshua’s promoter Eddie Hearn to make the superfight, however they are waiting on the WBA to allow their vacant title to also be on the line.

“I’m not sure where this came from, it’s a pulled muscle, nothing major. A minor injury. Everybody’s blowing it up like he lost his leg,” Boente told Boxing News.

“If we had an opponent and there were a fight set on December 10, he would fight. He could fight. He has to stop training, and at the end of this week he could resume training if he wanted.

Aside from the Joshua fight in Manchester, Klitschko was looking at a potential fight in Germany on December 10, though was waiting on news from the WBA.

When his rematch with Tyson Fury was scrapped, Klitschko was linked to a fight with Joshua and it became closer to reality when Fury vacated his WBO and WBA titles. Joseph Parker and Andy Ruiz will contest the WBO title, however the fate of the WBA belt has still not been decided.

Since it was confirmed that Klitschko would not fight in 2016, his team and Joshua’s have been working torwards agreeing terms for a fight in April or March of next year. Joshua will still box in Manchester on December 10 against an unnamed opponent, and Hearn has March 4 at the O2 Arena in London already secured as a pay-per-view date. However, Joshua-Klitschko could still end up in a stadium, given how enormous the event would be.

“Everybody is talking about the injury, it has zero to do with that,” Boente continued.

“If the WBA ruled in favour of the Joshua fight I’m sure we would have gone through with it. I spoke to Eddie and we both still hope President Mendoza will rule in favour of our fight, hopefully today or tomorrow.

“We both agreed it makes no sense, because of our national and international broadcast partners and the media tour and of course the training. We said ‘let’s cross our fingers that we get this ruling from the WBA.’ We said we can do it in spring, March or April, and go from there.”

Klitschko won the WBA title against David Haye in 2011 and held onto it – alongside the IBF and WBO belts – until Fury outpointed him last November. As negotiations for a Joshua fight intensified, it emerged that Wladimir would only sign on for it if the WBA title were also on the line.

That initiated the continued waiting game for the WBA’s ruling – which still has not been confirmed. Rumours have swirled over how the WBA will vote, with Australian Lucas Browne having taken them to court over their ‘regular’ title. However Boente remains positive that the Panama-based outfit will sanction Joshua-Klitschko.

“That’s the plan, but it depends on the WBA. From the beginning, Wladimir always was a very, very proud and committed WBA champion and he would like the WBA title to be on the line too,” he said.

“It’s important to him, he’s said it from the beginning and then came all these rumours with [Lucas] Browne and this and that.

“From the beginning, we said we are waiting on the ruling from the WBA. So far there is no ruling, there have been rumours about opponents and major injuries, but we know the business. The fact is, we are waiting and still hoping that the real big one can be announced shortly. That would be fantastic.”

Klitschko will be ringside in Germany for Marco Huck’s upcoming fight with Dmytro Kucher to provide analysis for broadcaster RTL. After that, Boente said, the 40-year-old will take a holiday with his family after what has been a frustrating year due to his rematch with Fury being twice postponed.

The hiatus will be the longest of Klitschko’s illustrious career, with the Ukrainian having fought almost 70 times as a professional.

However what Bernd did make clear is that Klitschko is eager to face Joshua in what would be an international blockbuster.

“He went through so many training camps this year, that’s super frustrating. He will meet with Hayden, his wife, and their daughter and they will have a vacation and wait and see what comes next. Then he’ll be back in training.

“Wladimir always loves challenges and this definitely is a big challenge, no doubt about it. Two Olympic super-heavyweight champions fighting each other, the young lion against the old lion. It’s the fight to be made.

“I speak to Eddie on a daily basis and we both hope that we will soon have positive news from Panama – but that’s no news, that’s what Wladimir said from the beginning.”