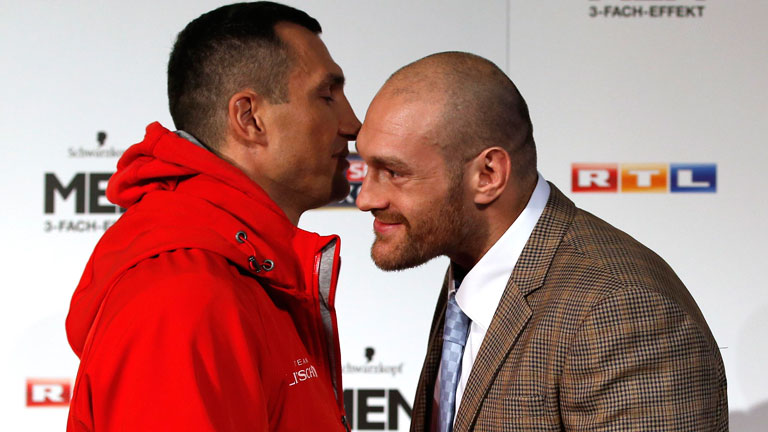 Wladimir Klitschko and his team feel they have no other alternative

WLADIMIR KLITSCHKO and his team intend to take Tyson Fury and his handlers to court over contractual disputes for their long-awaited rematch.

Though no date had been scheduled after the planned July 9 date was scrapped due to an injury Fury suffered, it was believed the rematch would most likely land on October 29.

“They want to change details in the contract – obviously we cannot discuss that publicly – but, as you know, we’ve already done press conferences in Manchester, in Cologne,” he told Boxing News.

“Now team Fury wants to change many parts of the contract, important parts, financial conditions etc, etc. and now I think we have to make sure that we implement our rights and so we have to go to court in Germany because the contract is under German jurisdiction. We have enforced our rights, and that is what we will do now.”

Aside from his ankle injury, which now looks to be almost fully healed, Fury has also had to deal with allegations of doping from UK-Anti Doping (UKAD), who earlier this year charged Fury with allegedly having a banned substance in his system. The initial suspension they put on him, and his cousin Hughie, has been lifted pending a hearing on November 4. Team Fury categorically deny the allegations.

Boente noted that the contractual issues can still be resolved out of the courtroom, though doubts that will happen and remains unsure if the mooted October timeline for the rematch is still feasible.

“There were no discussions beforehand – I don’t know what it really is,” he continued.

“We also want to implement VADA [Voluntary Anti-Doping Association] random testing for the fight, blood and urine [testing]. We want to implement that in the contract and I think we can absolutely ask for that, it’s for both fighters so it’s fair.

“I don’t know [if the fight will happen in October], it depends on the ruling and maybe ongoing discussions with team Fury because our door is always open, but I doubt it because these are absolutely impossible demands they have. For us it’s a breach of contract and now we have to take action.”

This latest development is yet another hurdle that needs to be cleared before the rematch – which was written into the contracts of their first fight – can happen.

Up to this point, team Fury have seemed hellbent on getting the fight made and securing Tyson’s status as the division’s kingpin, however if these disputes cannot be sorted out, the fight may not happen at all.

“I don’t know if it will happen, I have no idea. I spoke to Wladimir and I have never seen a champion being inactive for so long, especially after just winning the title. He would make a lot of money from this fight, I have no idea what’s going on.

“In any case, our door is open but at this moment I think there is no further possibility of a discussion so the next step is to go to court.”

Boxing News has reached out to team Fury for comment but has not yet had a response.