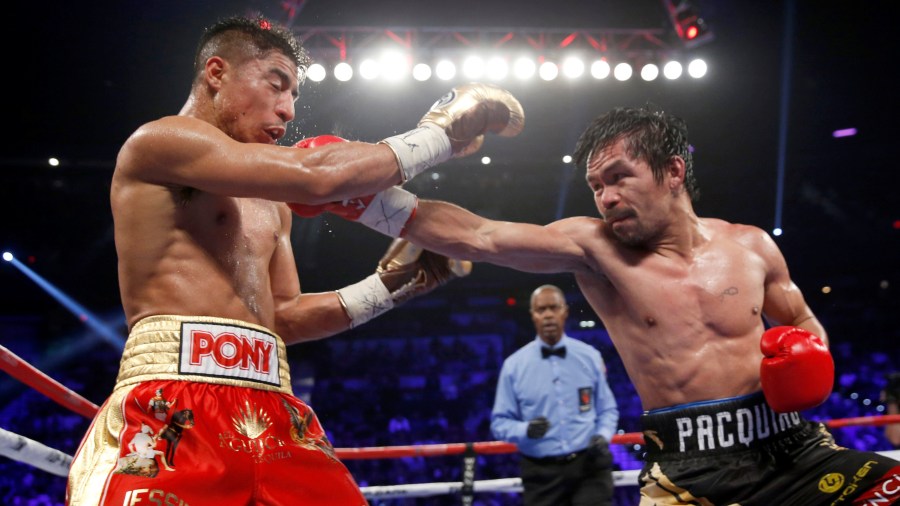 AT the end of last year, Jessie Vargas lost his WBO welterweight title to Manny Pacquiao. Vargas describes what it’s like taking on the Filipino legend over 12 rounds.

“He was fast but we expected that. I’d say his footwork is what’s mostly unique about him. I went down with a flash knockdown in the second round,” Vargas said. “It was a strange moment because I was coming in, I saw his intent to throw a shot and I stepped out before even landing my shot, as I was throwing I backed out of a shot. I took a step back and as I was taking a step back, I got caught with a straight left to the chin. It was his speed and me being off balance both at the same time. If you look at the replay you’d be able to notice that.

Vargas believes that Pacquiao is vulnerable. “I hurt him about three times. I should have capitalised, I was just so confident that I was going to catch him again. That was just inexperience. When you do catch a guy, you’ve got to follow up. Instead I was waiting for that same exact punch in the next round or in a couple of seconds. I just felt so confident I was going to knock him out in the same way that Marquez did but unfortunately I wasn’t able to. But we live and we learn and it made me a better fighter from it. If you look at any of Manny Pacquiao’s fights, this fight he was very competitive, it was literally a chess match. I’m very young, still have a long road ahead of me and a long career and a successful one at that,” he said.

“I think that most important aspect in that fight is that he wasn’t aggressive as he normally is. His punch output dropped. I think that’s the least amount of punches he threw within the last decade of his career. He didn’t look very good because he was thinking twice, it was literally a chess match, he didn’t know when to come in when not to come in, when he was going to get hit and when to throw a good punch. So that was something he was battling during the fight and so was I. It was literally a chess match. If you pay attention to the fight we were both overthinking in there and making sure that every time we committed we were effective with our shots and with our movements and very precise with every shot. That resulted in an entertaining fight which at the end of the day is what it’s about, giving the fans what they want to see, which is an absolute war or a great performance. That’s what they got.”