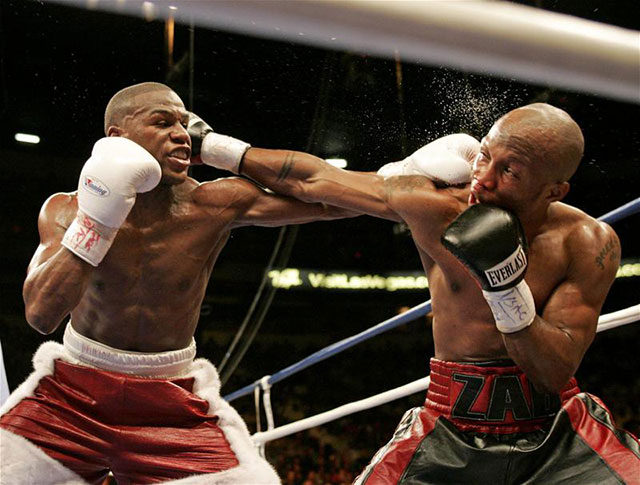 ZAB JUDAH is enjoying his time in Floyd Mayweather’s Las Vegas training camp, despite having some initial concerns about joining Mayweather’s preparations for the May 2 megafight with Manny Pacquiao.

The pair fought back in 2006 – Mayweather won a decision but was given some tough moments by Judah – and Brooklynite Zab was not sure how their reunion would go, considering the pair trash-talked each other in the build-up to their clash, despite them having spent time together since.

“I do consider him a friend, but I didn’t know how it was going to turn out and how it was going to be. The first day walking through the gym I went there by myself and finally Floyd came in the gym and he started loosening up, he was stretching, and he saw me through the mirror and turned around and said, ‘What up?’” Judah revealed to Boxing News. “And I replied, ‘What up?’ And he was like, ‘Ah man, thanks. I appreciate it.’ And I was said, ‘Good luck. I appreciate it too.’

“Every time he would come to New York I would always be there with him. I even came out to Vegas a couple times when he first got his house out here and I helped him move in.”

Judah is 37, has not fought since December 2013 and is coming off back-to-back defeats – to world champion Danny Garcia and local rival Paulie Malignaggi – but credits Mayweather for reigniting his passion for the sport.

“I have a new love for boxing again,” he declared. “Training with Floyd and being in there just reminded me that hard work and dedication always pays off.

“Working with Floyd, you just learn a lot. I’m not ashamed to say, I been at my career 18 years now, and when I go in there with him I’m still learning things. He sparks an interest in me.”

Judah believes that the outcome of Floyd Mayweather’s fight with Manny Pacquiao could have a pivotal impact on his buddy’s legacy.

“Will Floyd go down as being the greatest ever?” he pondered. “This fight right now has a big effect on that. I do believe he’s going to win this fight in high, spectacular fashion over Manny Pacquiao.”