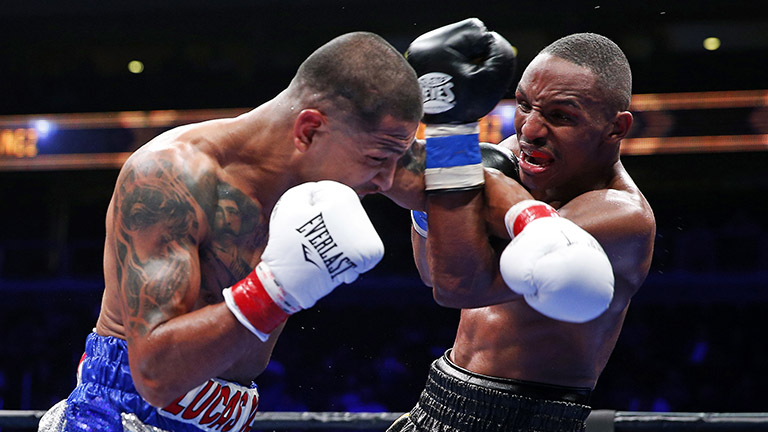 Kevin Cunningham reveals the demons that Devon Alexander has been battling with, writes Kenneth Bouhairie

“I’VE seen what drugs can do to you and that was enough to keep me away from them,” Kevin Cunningham says.

Cunningham’s sole addiction is boxing; the 52-year-old trainer’s idea of a good time is shoving a gumshield in a kid’s mouth after reprimanding them.

For others, however, boxing is a gateway drug.

In January 2012, as Cunningham trained Devon Alexander for the Marcos Maidana bout, a headbutt during sparring caused Alexander’s nose to swell.

The swelling wasn’t enough to postpone the fight. Alexander won a wide decision, beating Maidana more decisively than anyone before or since. But the swelling remained. Doctors discovered a blood clot and Alexander underwent surgery to remove it.

“I thought that was the end of it,” Cunningham recalls. “But his wind and reflexes were off when he returned to the gym. It got really bad and I’m realising something isn’t right, but he kept telling me everything is fine.”

An unconvinced Cunningham conferred with Alexander advisor Al Haymon. They sent Devon to the Cleveland Clinic and then the Mayo Clinic to have his heart checked out. Both found nothing wrong.

What ailed Alexander showed in the ring. In December 2013, he lost his IBF welterweight title to a young, upset-minded Shawn Porter. Then Amir Khan outclassed him over 12 rounds. When Alexander lost a decision to 50-1 underdog Aaron Martinez, Cunningham had seen enough.

“I told him, ‘You’ll never fight with me again until I find out what’s going on with you.’”

Two months later, Alexander invited Cunningham to his home. That’s when Devon broke down and confessed: He was addicted to painkillers prescribed to him following the nose surgery.

“It hit me hard,” Cunningham remembers. “Devon saw what substance abuse did to his former teammate. He’s never even tasted a beer in his life. Devon was always disciplined – that’s what boxing is all about.”

Cunningham would know. While his older brother battled drug addiction, he used boxing to avoid such pitfalls in St. Louis’ inner-city. He was also a member of the Army boxing team during his stint in the U.S. military. When he came home, he joined the St. Louis police force and worked the notorious Eighth District, a neighborhood hidden behind boarded windows and inhabited by mercenaries on each corner.

“I was a cop for nine years,” he says. “The crack epidemic was huge in 1991-92. I was pulling up to scenes where 15-year old kids were lying dead on the streets with bodies riddled with bullets. At some point I asked myself, ‘What can I do to have a positive impact in the community?’ And I remembered that it was sports that kept me out of trouble.”

Cunningham leveraged his relationship with the city’s mayor to obtain the use of an old police building basement. He built a gym there and started the St. Louis Police Athletic League (P.A.L.).

“We started pulling kids off the street using boxing as a hook for them to do something positive,” he says. “Even if they didn’t go on to be professional boxers, they would learn the moral values, work ethic, discipline, structure and focus that would carry them through life.”

The students weren’t the only ones learning. Cunningham studied under Ben Stewart, Kenny Adams and others, trainers who taught him old school wrinkles that, according to Cunningham, boxers lack today. Knowing how and when to set up shots, how to turn defence into offense and vice-versa in an instant is a lost art, he says.

“Only guys today with throwback skills are Andre Ward, Vasyl Lomachenko, Terence Crawford and Adrien Broner,” Cunningham says.” Adrien had it all, plus he knows how to market himself. I really thought he would fill the void Floyd Mayweather left. But when you’re not disciplined outside the ring, it can affect you inside it.

“Floyd was really the last of the Mohicans. He didn’t have all these guys in his camp; the nutrition guy, the ‘stretch you out’ man, the vitamin man and the Tae-Bo guy. This is boxing. Your main focus should be on your skill, technique and strategy.”

Southpaw Cory Spinks was one of Cunningham’s prized pupils at the P.A.L. Following a fine amateur career, Spinks became one of the best pure boxers in the pro game, winning the undisputed welterweight championship and a world junior middleweight title.

Alexander, another lefty, joined the P.A.L. at age seven. Under Cunningham’s tutelage, he compiled a 300-10 amateur record. As a pro, he won two belts at 140lbs. and one at 147, defeating Maidana, Lucas Matthysse, and other lesser yet reputable names along the way. At one point, none other than Mayweather himself appointed Alexander as heir to his throne. He alluded to a possible showdown, until Devon’s world crumbled.

Upon revealing his addiction, Alexander checked into a rehab, where he remained for eight months. He’s been out and clean for a year.

“I always wanted to retire in Florida,” he explains. “I’m loving it so far. St. Louis is too cold half the time and too hot the other half. Camp Cunningham is the perfect place for world class fighters to hold camp for big fights. It’s three blocks away from the beach but the gym is private and gated.

“Florida is the home of fitness because everybody is trying to get a beach body. I’ve got fitness, conditioning and strength trainers. But at Camp Cunningham, we’re all about boxing. We focus on skill, technique, and all things boxing-oriented.”

Alexander is a regular at Camp Cunningham. He is expected to return this fall. Both are excited about this fresh start.

“Devon went through a lot to overcome that to overcome an addiction that’s the number one problem in America today,” Cunningham says. “He’s still young at 30, but he’s a seasoned professional. So, we’re not coming back to trash-talk or call out opponents. Al just needs to tell us when and where and we’re going to let the performance do the talking.”