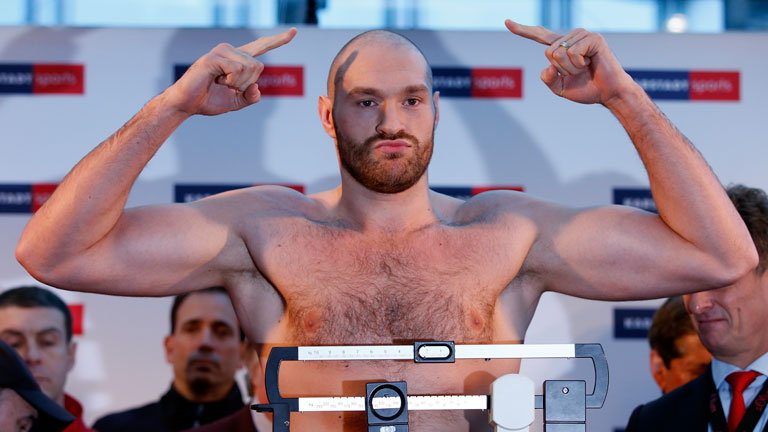 Tyson Fury has lost a lot of weight in camp

TYSON FURY, after weeks of toiling away in the gym, is now walking around at his optimum fighting weight ahead of his July 9 rematch with Wladimir Klitschko.

The unbeaten giant was notoriously out of shape at the press conference to announce the fight back in April, whipping off his shirt to display a wholesome gut.

However he has locked himself away, initially in Holland but for the past few weeks back in the UK, and has shed the unwanted poundage.

“He’s now around 18st 10lbs (around 260lbs), so he’s on weight. He may lose a pound or two between now and fight night, but he’s at his fighting weight now,” his trainer and uncle, Peter Fury, told Boxing News.

“We’re right in the thick of it at the moment, but things are going very well.”

Fury scaled a relatively svelte 247lbs for his first meeting with Klitschko, though Peter explained that they have focused on power in this camp, thus increasing a bit of muscle mass.

Tyson – who has never been known for his carved physique, though fights with a good engine – was apparently around 21st before he began camp, meaning he has shifted almost three stone so far.

His cousin Hughie, however, will remain sidelined for a while as he continues his recovery from severe food allergies and other physical issues.

The unbeaten contender is currently on a six-month course of medication which Peter hopes will solve the problem. The issues Hughie is dealing with have caused him to lose a bit of weight, though he is currently doing some weight training to bulk himself back up.