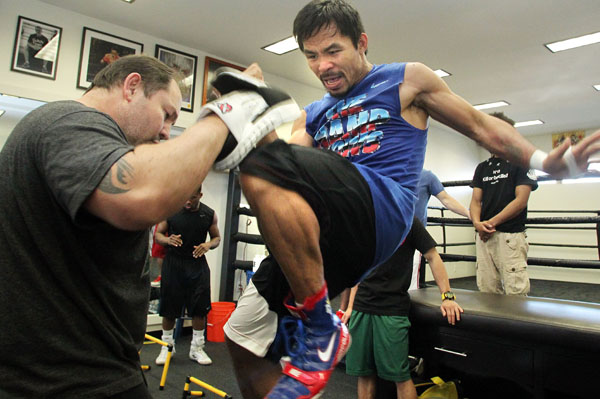 Former pro heavyweight and current strength and conditioning coach for Manny Pacquiao, Justin Fortune, talks about training the Filipino icon ahead of the Floyd Mayweather fight

I STILL train my own fighters. I was training fighters with Freddie Roach and someone was doing an interview one day and asked me, ‘What do you do with Pacquiao?’ I said, ‘I don’t know. I suppose I do some strength and conditioning.’ That was 2004. Before that there were no strength and conditioning coaches for fighters and then it just sort of blew up. Everyone’s a strength and conditioning coach now! That’s all well and good, there’s a lot of good guys out there, but with fighters it’s a different ball-game. It’s an individual sport and the other guy over there wants to beat you up. If you haven’t been in the ring and experienced what a fighter experiences and know what it is to dig down, suck it up and fight, it’s really hard to relay that to a fighter and expect him to give you his respect and his 100 per cent. If you’ve never been where he’s been, it’s just harder. If I had some guy telling me what to do who’d never been in the ring, I’d be like, ‘Really? Give me a break. What do you know?’

I started working with Manny in 2002, stopped in 2008 and then came back for the last Timothy Bradley fight [in April 2014]. The other guy [Fortune’s predecessor Alex Ariza] was an idiot. When me, Freddie and Manny are together it’s a good team. We work so well together. Freddie was my trainer since 1992 and we just know each other so well. I know what Freddie wants from a fighter and it’s very easy for us to work together. And Manny was happy, because we’re friends to start with, all three of us. If your athlete is happy, you’re going to get 110 per cent out of him.

I work with him every day. It’s a whole bunch of agility work, speed work and upping his strength. We go to UCLA [university campus], do a bleacher work, different things. Boxing’s pretty boring, it’s the same stuff – bagwork, mitt work. We do a lot of lower-body and upper-body plyometric work because they’re explosive exercises and they use fast-twitch muscle fibres. We do jumps, floor ladder work, and for the upper body, a lot of ball work and basically speed-pushing work. You’ve either got fast-twitch or you don’t, and if you don’t, you might as well go do long-distance running or something, because boxing’s not your bag.

I used to get bored as a fighter so I would always change things up to keep myself interested in what I was doing, and it keeps the body responding. This was 20 years ago, just because I got bored, nothing scientific behind it. It’s shocking your body into performing all the time. Keep it varied, keep it interesting and we have fun and we work hard.

Work to the opponent

Obviously you cater towards each opponent. With Floyd Mayweather, it’s a lot more leg work because we think we’re going to be chasing him and using a bunch of angles, so Manny needs to be super-explosive off his legs. Legs are where your power comes from, legs and hips, so we’re just developing that.

He’s a freak, one of those freak fighters. Mayweather’s a freak too. These guys, they run hard, they run fast, they’re explosive. Manny is super-explosive, his legs are ridiculous, his angles are crazy. You don’t know where he’s going to be. He’s all over the place and that’s Manny’s gift. That’s the way he fights, he’s very, very difficult to pin down, and when you can’t pin someone down, you can’t hit them.

I want my fighter 100 per cent fit and super-explosive. I do my job, Freddie does his job and Manny does his job, we come out with what we want, which is the win. I know what Freddie wants out of a fighter – I’ve trained a few of his fighters – and that’s what I can give him. Freddie puts his game plan into play and that’s it. It’s a hell of a lot of common sense. Everybody wants to reinvent the wheel. All these guys come into camp with ideas but really boxing’s been around forever and if someone knew about it, it would have been done 30, 40, 50 years ago. There’s only certain ways you can train a body and my training falls back on old-fashioned hard work. If you’re chopping wood or lifting hay bales, you can’t help but get stronger, that’s just the way it is. It’s not rocket science.