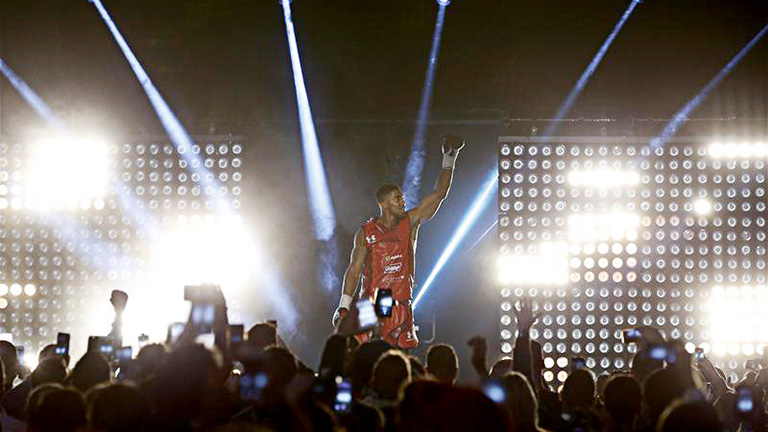 The promoter insists he was not concerned when Joshua wobbled in the second round but accepted the contender still has a lot to learn. The Olympic champion recovered from a massive Whyte left hook, and steadily broke down his rival before knocking him out in the seventh. Hearn still believes Joshua – whom he likens to “gold dust” – is the best heavyweight on the planet, but there are no immediate plans to fast-track the star to a world title shot.

“We’re driven by the team’s decision, and I’m part of that team, but the training team are overseeing his development,” Hearn told Boxing News when asked if Joshua’s harder than expected outing with Whyte had altered his plans for the 15-0 (15) giant.

“I felt before the fight that he beats every heavyweight in the world. I still feel that, but it’s not the right time to put him in with them. As Josh says, why put him in now, when you can make easy work of them in six or 12 months’ time? He’s got to learn. What Saturday showed was, if you put together all the 14 fights he’s had previously they don’t provide 25 per cent of what he learned in seven rounds on Saturday. What happened on Saturday will make him a much, much more complete fighter.”

Joshua had bitter rival Whyte rocking and rolling in the opening session of their contest for the British and Commonwealth titles, but was tagged in the second and looked in trouble. Hearn believes “AJ” only has himself to blame for the stumble, and that his desire to flatten the man who defeated him as an amateur triggered undue carelessness.

“I know people are saying he was hurt,” Hearn continued. “He was buzzed, but he got hit by a shot that would have knocked a lot of elite heavyweights out. One thing we know about Joshua is he’s got a great chin. We’ve seen it in sparring and we’ve seen in in the amateurs. He’s got a great chin but he’s got to learn and he fought off emotion rather than instruction [against Whyte]. He could have made it lighter work of it but he wanted to fight in that way, and he really enjoyed himself, and so did the crowd.”

And that enjoyment – from the fans who paid to attend, or watch at home – spells perceived value for money. Fans can expect more of the same from future Joshua outings, with plans to build huge events around the fighter from now on.

“One thing we see with Joshua is he’s a phenomenon in terms of gate receipts, Box Office, everything and now the brand that we’re trying to create with Joshua is that every time he fights, it’s a marquee night for British boxing,” Hearn revealed. “That’s not just his fight, that’s the card as well. He understands that as well. He made an absolute fortune on Saturday night but he also understands we’ve got to build the show and when we’ve got the undercard we had and all those fights go to plan in terms of entertainment and then you get a heavyweight fight like that, it’s gold dust.

“The difference with Joshua and a lot of other heavyweights is he will provide excitement, whether it’s one round, three rounds, five rounds or 12 rounds. He will never be in a dull fight, and there aren’t many heavyweights like that. They’re slow, they hold. Joshua is like an old school heavyweight really rather than a new robotic, upright, sort of heavyweight, he’s totally different to that.

“When he smells blood, he goes for it – and that’s what nearly got him undone on Saturday night. He hurt Dillian Whyte, backed him up against the ropes, and Dillian just countered with a left hook but Joshua won’t do that again. He thought he could walk through these people all the time and that’s why in the third round he had to readjust, and say, ‘Hang on a minute, this isn’t working. I can’t just keep marauding forward with my chin out trying to drop bombs, I’ve got to box him’. He did that in rounds four, five and six, broke him down, and then hurt him in the seventh. As soon as he hurt him, it was over.”

WHO WILL JOSHUA FACE IN APRIL?