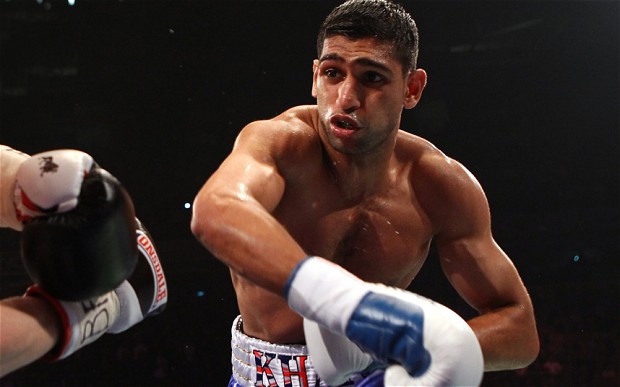 DISCUSSIONS for Amir Khan to fight Kell Brook will start up later this year, Showtime’s Stephen Espinoza is convinced, saying, “It would be a monster fight. I think it would be very, very entertaining.”

Kell Brook called out Amir Khan after defending the IBF welterweight title in March. Any negotiations promptly stalled and while Brook defends against on May 30, against Frankie Gavin, Khan fights the day before against Chris Algieri in New York in a fight that won’t be screened by Showtime (Spike televise in the US). But Espinoza, the executive vice president and general manager of sports programming at the network, said, “I fully expect him back on Showtime. A lot of factors go into whether we do a fight or not… It wasn’t the right fight for us.

“We stay in contact with Amir and fully intend to have him back in a high level fight as soon as he gets out of this one.”

Showtime also want to continue to show Brook’s fights. “Kell Brook has been someone that we’ve been a little bit unlucky with. It took us two years and I think three cancelled events to finally get him on the network. Somone we’ve had an eye on for a while,” Espinoza noted.

So far the signs for Brook fighting Khan have been inauspicious. But Espinoza is confident negotiations will progress. “What people didn’t get about that is that it is a pay-per-view fight in England. There was a window to do it but there was only eight weeks to do it. You might able to do a Mayweather fight on eight weeks but if you’re starting from a dead stop in trying to create a pay-per-view event that hasn’t even been negotiated or set up, you need more than eight weeks to do it correctly,” he explained. “That was why the talks between Amir and Kell didn’t go very far. Kell could have done it but there is a deadline, Ramadan wreaks havoc with Amir’s schedule sometimes. So he had to fight before the second week of June, there was a pay per view deadline but he felt like he was rushing. So he took a fight. I fully expect him to engage in discussions with Kell for the fall when he comes back.”