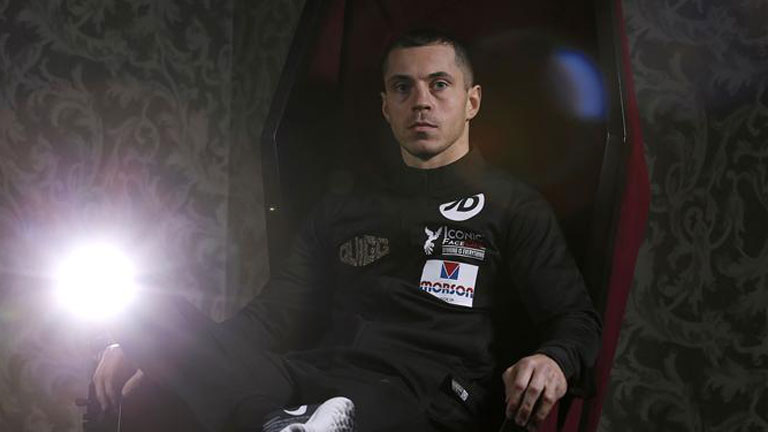 SCOTT QUIGG is confident a fight between he and WBA world super-bantamweight champion Guillermo Rigondeaux will be made “in the near future.”

The 27-year-old has just returned to full training after recovering from the broken jaw he suffered during his split decision loss to Carl Frampton in February.

Rigondeaux recently defended his title against Jazza Dickens, breaking the Liverpudlian’s jaw in the second round and Quigg feels criticism aimed at Jazza is unwarranted.

“It was a peach of a shot and it was unfortunate. I saw Jazza getting a bit of stick on social media, listen, Jazza wanted to fight on I believe but his corner said ‘no, you live to fight another day,'” he told Boxing News.

“Plus he was in there with one of the best, pound for pound, in the world and that was probably the third shot he got hit with clean, and look at the damage it did.

“You’ve got to weigh up the pluses and the negatives, at the end of the day it takes guts to get in the ring and anyone criticising him needs to pipe down and show the lad some respect because he’s got in there with a pound for pound fighter a lot of people have said me and Frampton have been running from. We’re not running from him and I’m sure that fight, with me and Rigondeaux, will get made in the near future.”

Rigondeaux himself has frequently slammed Quigg and Frampton for not fighting him, and the Cuban’s abundance of talent has been wasted lately due to his alarming inactivity which, he claims, is because he is so avoided.

Quigg plans to return in November – there are two dates in that month which he could land on – and insists it will be in a “big fight.”

Rigondeaux is mooted to be fighting in the UK on September 17 – though this has not been confirmed – meaning he may not be Quigg’s opponent in November. However, the Bury man has kept a close eye on the pound-for-pound stalwart – and even has a plan on how to beat him.

“Without a doubt, I would fight him. I’m not going to go in there and win on points and outbox him, I’m not kidding myself,” he admitted.

“My tactics would be, go in there and put it on him, try not to get caught with anything on the way in, once I’m in just stick to his chest and work him. You’ve got to hit him, he’s been over before.

“When you’re at that mid-range you’re in the danger zone with him. You’ve got to stick on his chest, the hard thing is getting there because his footwork’s so good. But if you can get in there, rough him up, shove the elbow in his throat you can take it six, seven rounds, who knows? If you can land, he can be hurt.”

Clearly, Quigg has done his homework – proof perhaps that he is not avoiding the Cuban, as he has been accused of doing.

He admits that a fight with Frampton was much more attractive, understandable given how much both men earned from the pay-per-view clash, and that taking a tough fight with Rigondeaux for less money was not worth the risk at the time.

“People think me and Frampton don’t want to fight him, I’ve been watching him for a long time and it’s about getting fights made at the right time,” he continued.

“If either me or Frampton had been beat before we fought, it would have taken the shine off it, it sounds stupid but it would have done. Now that fight’s happened. Definitely, in the next eight to 10 months, I believe I’ll fight Rigondeaux.”

During his recovery period, Quigg took a couple of holidays but also travelled to Connecticut to support gymmate Stephen Smith during his unsuccessful attempt at Jose Pedraza’s IBF world super-featherweight title.

While over in the States he met with some of the American broadcasters who air boxing, and could find himself fighting over there in the near future.

“I spoke to [Showtime supremo] Stephen Espinoza and I had some really good talks over there, it’s all positive. We’ve got a lot of options,” he said.

“The main thing is me just getting back to full health, 100 per cent training and peak performance and then whoever’s there in front of me it’s about getting in there and doing the job and working my way back up.

“There’s a definite chance my next fight could be over there if we wanted it to be. It all depends on the best thing for me. I want the biggest fights, whether that be over here or in America and talks are going well between me and Eddie [Hearn, his promoter], we’ve got a number of options and they’re all big fights. Within the next couple of weeks there should be an announcement.”

For the full, extended interview with Quigg, in which he talks about the darkest period of his career, grab next week’s issue of Boxing News.