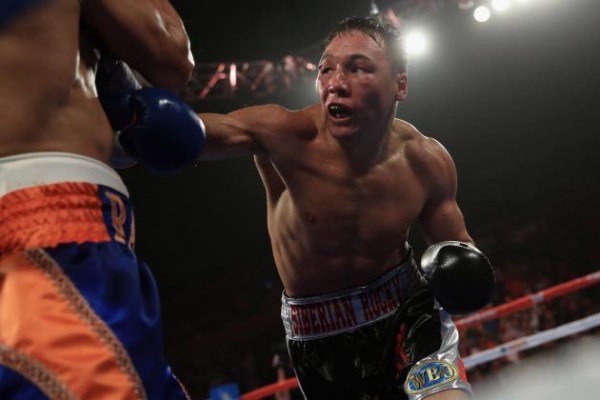 IT will almost certainly be a case of bombs away when power-punching light-welterweights Ruslan Provodnikov and Lucas Matthysse – who have a combined  51 KOs between them – collide on April 18 in Verona, New York.

Both men have thrilled fans with their raw slugging approach and Russia’s Provodnikov is anticipating a potential Fight of The Year against the man from Argentina.

Q: You said quite recently, before the Matthysse fight was finalised, how you saw it as a 50-50 fight. Do you still feel that way leading up to April 18th?

Ruslan Provodnikov (translated by Vadim Kornilov): “Definitely! This fight is going to be a real war. I know that and I am ready and I am prepared for that.”

Q: Fans everywhere are expecting a thriller, maybe even a Fight of The Year. Do you also feel this will be the case next month?

R.P: “Well, I do not see how it could not be! As I said, this is going to be war and I definitely think if it is not a Fight of The Year, then it will have a candidate for KO of The Year.”

Q: You definitely feel the fight will not go the distance?

R.P: “I would definitely say so. I never predict my own fights, but as I have been saying, I am almost 100-percent sure this fight ends with a KO. But of course, we will have to wait and see on the night.”

Q: Is this, potentially at least, the toughest fight of your career?

R.P: “I think he [Matthysse] is certainly one of the toughest opponents of my career. Everyone [the fans] knows who myself and Mattyhsse are and this is a dream fight – for them and for me. I wanted this fight straight away [as soon as it was a possibility].”

Q: You are known for your great action fights. Is pleasing the fans almost as important to you as winning?

R.P: “Definitely, yes. My fans are everything to me. I fight for my fans, not for money, but for them. But the way I fight, it comes from inside me, it is just my style.”

Q: Matthysse has been in some wars himself and he was knocked down twice by John Molina Jnr before winning last April. Do you feel he may be just a little past his best and will be vulnerable to your power shots?

R.P: “This is a possibility. But in this fight, there will be danger for both of us. I think this fight will come down to who is the stronger, both physically and mentally. This fight will show that [who is stronger].”

Q: When did you begin training camp?

Q: Will you be sparring Manny Pacquiao at all, as you get ready and as he gets ready for his massive fight with Floyd Mayweather?

R.P: “No, not this time. We do not fit the style of one another’s opponent. I will make sure I get good sparring though.”

Q:  A win over Matthysse would be big for you of course, do you anticipate a big 2015?

R.P: “Yes. I will get my [WBO light-welterweight] title back this year. I will do it for those people who do not believe I can get it back.”

Mayweather and Pacquiao begin training for May 2 superfight