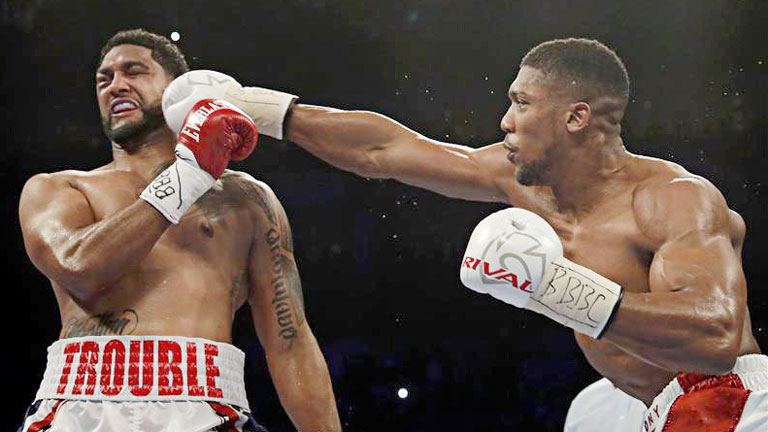 FOR the first time since Carl Froch defeated George Groves in May 2014, Rob McCracken will be in a corner on Saturday. It may not be in front of 80,000 people at Wembley Stadium but it will be for a major fight as Anthony Joshua defends his IBF heavyweight title against Eric Molina at the Manchester Arena on December 10.

“It’s been two and a half years since I was in a corner, last one was with Carl, Carl’s last fight. It’s something I’m looking forward to but it’s top level boxing. It’s very dangerous. The opponent’s a good puncher and knows what he’s doing, very experienced. So it’s a good fight Saturday night and it’s one where Anthony will have to perform at his best to get a good performance in and get the victory,” McCracken told Boxing News.

The trainer has a longstanding bond with Joshua. The performance director at GB Boxing, Rob headed the team that helped guide Anthony to his Olympic gold medal at London 2012. He’s been a mentor to him in subsequent years and will work with Tony Sims, who has cornered Joshua’s professional fights so far.

“Tony Sims is a hugely experienced trainer but I know AJ very well and we’re pretty close, advice and mentoring and stuff I’ve always done for him over the last few years. Any advice, any tips he’s needed he’s come to me. We’ll move on from this stage and hopefully my guidance and my help can culminate in him getting to the very top and being undisputed champion. The main thing is he’s a great kid, he’s great to work with and he’s receptive to everything. The people that have contributed along the way, they deserve full credit,” McCracken said. “I was working with AJ [on the Olympic squad with] three really experienced coaches at GB. Paul Walmsley, Dave Alloway and Lee Pullen put a lot of work in with AJ as well on the Olympic journey where it culminated with him winning a gold medal. There’s a lot of good work done by the coaches at GB, they deserve a lot of credit in his development to Olympic champion and obviously Sean Murphy and Johnny Oliver [at Finchley amateur boxing club] have done a fantastic job with him, making him national champion. He came to Sheffield as a real good prospect. We were fortunate enough to work with him and try and take him to the next level. That culminated in Olympic gold. Obviously he’s moved on from there and took the pro game by storm and he’s developing well and nicely. There’s still a way to go, a lot of learning to do and he’s the first to admit that. But he’s pretty decent fighter already and he’s got real power.”

McCracken is not taking Molina for granted and is glad that he will be in the corner for this fight. “It’s nice because I can guide him through and give him advice when he’s in sticky patches. I’ve been spending a lot of time recently working with him and training him and obviously you want to carry that out when he performs and when he fights. Like I say Molina’s no easy opponent. He knows what he’s doing: good power, decent fighter and very dangerous. It would be good to be with AJ on the night and pass on hopefully the advice and information that he needs to put a good performance in,” the trainer said. “I just think he [Molina] has got real good power and he’s awkward and he punches when you least expect him to. He throws a good left hook from a standing position, he’s got pretty decent variety and speed when he needs to. You just never know when he’s going to swing and when he’s not and some of what he does is wild and some of what he does is smart and cute. Good opponent, solid test for AJ but it’s somebody that he needs to be beating and moving to the next level and getting him ready for the likes of the big names like the likes of the Klitschkos and the Wilders. It’s a good test for AJ and solid opponent.”

It’s a real possibility that Wladimir Klitschko could be Joshua’s next fight, in a battle to unify the IBF and WBA titles. Ultimately McCracken would love to see Anthony become the world’s undisputed heavyweight champion.

“I’m about the fighters and it’s all about the fighters to me and they’re the ones that take the punches and deliver the performance and live the life and do the work. It would mean a lot to me to see AJ go to the very top, i.e. win an undisputed title and to be part of that, that would be fantastic. My role is always to try and coach them the best that I can so they can win their contests and obviously guide them through them and try and avoid pitfalls along the way. And learn while I’m on the job and he’s on the job. But ultimately the real pleasing thing for me is when you see the boxer succeed and fulfil his potential. That’s what it’s all about for me. Being part of that is really enjoyable but ultimately it’s about the fighter.”

But typically he declines to look too far ahead. “If it’s Klitschko next year or [WBC champion Deontay] Wilder or whoever, I just think get Molina out the way, learn something and get the win,” he concludes. “That’s what it’s all about.”