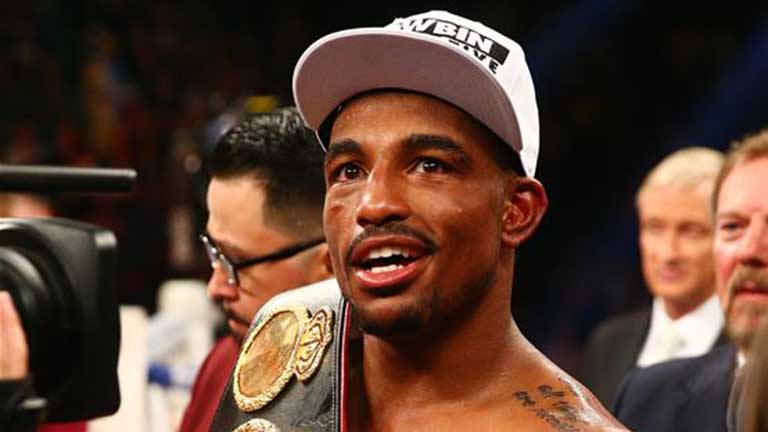 J'Leon Love talks to Boxing News about his upcoming fight, returning to his Kronk roots, and his pick for Jack-DeGale

Boxing News sits down with former WBA International super middleweight titlist J’Leon Love as he prepares for his return to action. Here’s what he had to say.

J’Leon Love: Camp is going good, man. We’re getting a lot of good looks. Different types of fighters, boxers, aggressive fighters. As far as the sparring and things like that we’re looking good.

BN: What do you know about your opponent and how did the fight come about?

JL: My last fight was April 1st so, you know, I had been training for possibly getting a fight with Chavez Jnr. but it was just talk. Nothing ever really stuck but I remained in the gym training. I just needed a date. So, September 16th came up and we got on the card. Dashon Johnson is the guy I’m  fighting. People look at a record and judge him but he can actually fight. He has been around quite a lot of top guys. He has experience and he’s in there. I’m sure he’s going to come with his A-game. You know, you can’t look past nobody due to a record. We did our homework on him and we’re very prepared for September 16th.

BN: How do you feel about fighting against a boxer that is relatively unknown?

JL: You never know what kind of fighter you have in front of you. You may have a guy with four or five losses but, when he’s fighting you, something could have motivated him to train and work so relentlessly that he’s going to bring everything he’s got and it may be the hardest fight you’ve ever had. You never know. This is boxing so you can’t never count a person out. Robert Guerrero. I was watching that fight, and (David Peralta) was really a good fighter. Not only that but there was nothing on him, they couldn’t find sparring, they couldn’t find previous fights on him. Those are the guys you really have to watch out for.

JL: I’m not really worried about him ‘cause I plan on dictating what I’m  going to do. I’m  going to adjust to whatever comes in play. I’ve re-arranged my training, my focus and what I need to work on. My bad habits, things that fighters could have seen and could exploit in me. So we’ve been working on that. We’ve really dedicated ourselves to working on that. So, with that being said, you’ll definitely see a more tuned-in and ready J’Leon than before.

BN: To what do you attribute your previous sub-par performances?

JL: Being young and immature, man. Things were really moving fast for me. I didn’t really appreciate the opportunities that I had. I’m with one of the best fighters in the world, making crazy money, you know what I’m saying, and I’d never been in that position before. Coming from where I’ve come from, it was like a change overnight. I was able to do things that I was unable to do before. Buy things that I was never able to buy. With that, it was a distraction. I just wasn’t ready for all of that then. Being young out in Vegas, by myself, and not with the guys that I grew up with. The guys that was training me. The guys that I respected and taught me discipline. I wasn’t with those guys so I had a very long leash. I was just care free, running around. I was a kid, you know what I mean? Now, today, I am a lot more mature. I see the opportunities that I had and almost lost. I had setbacks from not taking advantage of them and not appreciating them. So, here I am, a lot more hungry than ever and ready to showcase myself.

BN: Do you have any regrets?

JL: The only regrets I have are not really always putting 100% into what I do. I can’t fault people for me losing. I can only fault myself because I didn’t push myself. I was getting away with things that I normally couldn’t get away with. But I went home and got with the guys that got me noticed, that got me signed. Those are the people I went back to. So, with that, your ego is checked at the door, your money is checked at the door and, here it is. If you’re not dedicating yourself full-fledged and giving 100% and doing what they say- it’s not what I say – doing what they say because they’re training. They’re here away from their families dedicating themselves to me. If I’m not giving that, then they’re not here. So it’s a lot different. I had to go back to the old days, the Kronk days, the Kronk Boxing Gym days. A strict regiment and that’s what I’m on now. So I don’t regret anything. Everything happens for a reason. Starting on September 16th, we’ll be back to where we need to be.

BN: Do you feel that you’re still in your prime?

JL: I’m  still young. I’m only 28 years old. I’m as healthy as ever. I don’t eat garbage. I feel like when you don’t take care of yourself, that’s when you lose that so, for sure, I’m still in my prime.

BN: Has training alongside Badou Jack motivated you?

JL: For sure, man. Think about it. The guy is a WBC super middleweight world champion. No matter if we’re in the same weight class or not. That’s a goal that I have for myself. I want to be world champion and not just a world champion. I want to be a pound-for-pound king. You know what I mean? I want to break these records. I want to do the things that these great fighters have done before me. It definitely motivates me.

JL: I’m not going to rank myself until I do get a title. We’re going to save that question for when I become world champion (laughs).

BN: If the fight between James DeGale and Badou Jack gets made, who do you pick to win?

JL: I’m going to go with my man, Badou Jack. I have to. It’s a great fight with two great fighters. James DeGale, obviously a world champion as well. And one will become the undisputed world champion. I’m looking forward to the fight. It’s going to be a good one. I know that both guys are going to bring their A-game and I’m a fan of boxing so I can’t wait to see it as well.

BN: What do you want to say to your fans and supporters?

JL: I appreciate everybody. For a guy to come from nothing, now people notice me. People recognize me. Whether they see a bad fighter, a good fighter, a medium fighter, whatever. All things are good because, at one time, nobody knew who I was. When I was in a basement boxing, trying to chase a dream. I’m getting there. I’ve had my lessons in the game, my time-outs and slaps on the wrist. Now here it is. I’m a lot more focused and I’m taking things a lot more serious. And I’m older now. A lot of people are my age and they don’t learn from mistakes but I learn from my mistakes. So I appreciate everybody who does support me. Thank you. September 16th, we’ll start off great.