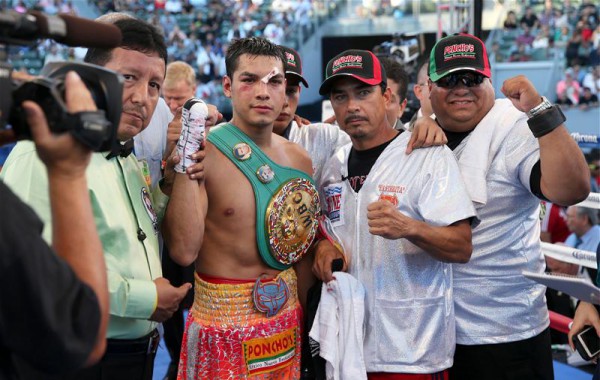 "I always try for the stoppage and it depends how much Ricky Burns can take," Omar Figueroa tells James Slater

MEXCIAN-AMERICAN Omar Figueroa, the former WBC lightweight champion (title never lost in the ring, Figueroa, unbeaten at 24-0-1(18) was sidelined due to an infected cut suffered after his winning fight with Daniel Estrada August of last year; the cut coming from an accidental head clash, and the WBC vacated the title) will meet Scottish hero Ricky Burns in a non-title clash at 140-pounds on May 9. The fight, which will go ahead in Texas, will give Burns, 37-4-1(11) and winner of just one of his last four outings, a chance to rejuvenate his career.

But “Panterita,” as Figueroa is known, has other ideas:

Q: First of all, have much do you know about Ricky Burns and which fights of his have you seen?

Omar Figueroa: “I’ve not seen him at all. My trainer and my team, they look at tapes and at opponents for me. But I will look at some tapes of Ricky Burns now that I’m fighting him; to see how he reacts to shots, how he moves and what he does. But I have a style where I can’t really look at tapes [of other fighters] because I have a different style to other fighters. But I’ll look at Burns and see what he does from fight to fight. I am expecting a good fight, I’ve always imagined fighting him and I’m glad the fight is finally happening. I’ve heard a fair bit about him and I’ve seen him in flashes. I know he’s a very tough guy. I think his style is very fitting for me and it will be a good fight.”

Q: Burns’ form has been far from great recently and many people see this as a fight where he has everything to gain and you have everything to lose. Do you see anything you can gain with a win over Burns?

O.F: “Well, every fight is dangerous. And I do not like to lose. And I love boxing because I love the one-on-one; the mental battle, the chess game. I have nothing to gain maybe, but I don’t fight for titles. I fight because I love it. So to me, every fight has a lot of significance. I’m training for Ricky Burns as though he is at his peak, in his prime. Because you never know in boxing, maybe there was some issue as to why he lost his recent fights. I’m preparing for Ricky Burns as though he is at his absolute best. Again, I hate to lose and that is my drive.”

Q: Are your lightweight days behind you for good, this fight being up at 140-pounds?

O.F: “I’d say probably, yes. I thought about it [fighting at lightweight again] but I spoke with [Al] Haymon and he pretty much talked the idea out of me. Of course I now want the big fights at 140, and I want the titles there also. But I take one fight at a time and I know Ricky Burns is no pushover and that is what I’m focusing on right now.”

Q: The fight you had with Nihito Arakawa, when you won the interim WBC lightweight title, in the summer of 2013, that was such a great, great fight. Did you get the appreciation you feel you deserved for that war?

O.F: “In all honesty, I don’t care too much what people say, because you can never satisfy everyone all the time. But, yes, people have talked to me about that fight and they have thanked me. That’s another reason I love to do what I do and be a fighter. People have thanked me for the memory of that fight and how it made them feel. A friend of mine, his mother told me later that that fight was one of the final things they were able to do together, and you can see her at ringside, jumping up and throwing punches. That means a lot to me.”

Q: Will you be looking to make a statement and become the first to stop Burns?

O.F: “I always do try for the stoppage, that’s the way I fight. It will depend on how much Ricky Burns can take and how much he is willing to take, because I will hit him and hurt him. Arakawa, he was willing to die in the ring. It all depends on how willing Burns is.”

Q: You never lost the WBC lightweight title in the ring and you are unbeaten. Are you at your peak at age 25 or is there more to come?

O.F: “Oh, I can be so much better. That’s what I strive for every day. Going up to 140 will help me and let me look and feel so much better. I was so drained in making 135-pounds.”