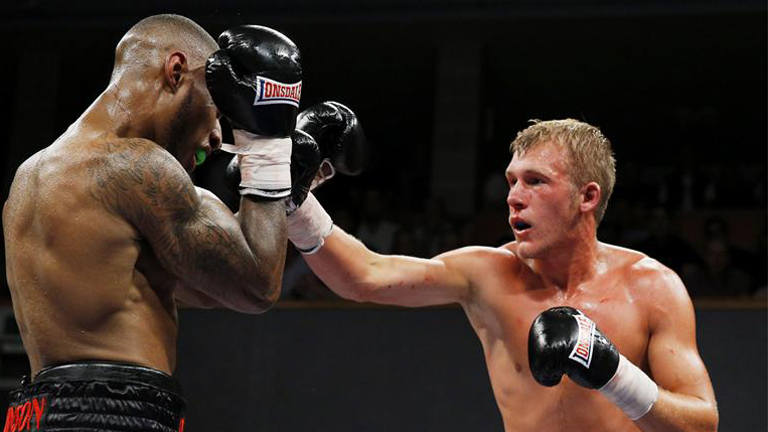 NICK BLACKWELL has helped his brother, Dan Blackwell, return the sport he loves after the 23-year-old journeyman retired in the wake of Nick being put into an induced coma in March.

Nick, thankfully, has made a full recovery from the bleed on the skull he suffered following his stoppage defeat to Chris Eubank Jr at Wembley Arena.

Nick’s injuries mean he will never box again, a reality which prompted Dan to also hang up his gloves, however he will return to the ring this Saturday in Walsall.

“A big part of the reason I quit was, because of what happened with Nick not being able to box, I thought he was going to miss it,” Blackwell told Boxing News.

“I didn’t really want to be around him all the time, boxing, knowing he couldn’t do it. Now he’s training but he’s helping me out now. Rather than him being down Cardiff all the time he trains with me and helps me train. It helps me out, he pushes me.”

Nick trained out of Gary Lockett’s famed gym in Wales during his career, but now has a lot more time to work out alongside his brother in Trowbridge.

He is also hoping to get a trainer’s licence and open up his own gym, though in the meantime he is keeping himself in fine fettle by toiling away with Dan.

“He still gets in and has a little spar, we don’t hit each other in the face though [laughs], it’s body sparring. He’s literally back to what he was like, sharp and strong. You would never know anything happened,” Dan continued.

“Although people look at it as people punching each other in the face, boxing’s not a dangerous sport. When you’re in the gym training and that, you’re not out on the street getting into trouble. What happened to Nick doesn’t happen that often, you’ve got more chance of me driving to work and crashing than what happened to Nick happening.”

Former British champion Nick was boxing at a much higher level than that which Dan currently operates at. The full-time bricklayer boxes in four and six-rounders, predominantly against young prospects, fulfilling the journeyman role which remains so integral to boxing.

Though Dan – who fought 11 times last year – was no longer boxing, he did keep himself doing a bit of training outside of work, though he admits it did not completely satisfy him.

In a heart-warming display of brotherly love, Nick approached his younger sibling and urged him to get back in the ring.

“Nick was the one who came to me and said ‘look, you should get back in there, doing four or six rounds, I can help train you,'” Dan revealed.

“We were doing bits in the morning together as well, sprints and that, before I came back. He saw me training and I think he might have felt, not like it was his fault, but that he didn’t want me quitting because of what had happened to him.

“He said ‘it’s not like you’re getting hit as much as I do.’ When he went in there he went in to give it everything whereas I go in there to just make it a bit difficult for people, show them it’s not an easy sport, and not get hit too much.”

Dan has a girlfriend, Chantelle, and two young children, one of whom was just nine days old when Nick fought Eubank Jr.

Though Chantelle was intially pleased Dan had walked away from boxing, she soon noticed just how important it was to him. Furthermore, Nick spoke to her to help ease concerns over Dan getting hurt.

“Me, Nick and my missus spoke about it together. My missus was happy I stopped doing it for a bit of time but I would get home and be a bit moody after a hard day, whereas before I would go and hit the heavy bag and be chilled out,” Blackwell said.

“So she said, ‘if boxing is going to help you more mentally, I want you to go and do it.’ Nick also went and spoke to her before and said ‘you should just let him do it, what he does is a lot different.’”

Dan, who will box unbeaten two-fight novice Luke Heron at the Town Hall in Walsall this weekend, hopes his brother successfully opens his own gym and will make sure he will spend plenty of time there if and when that happens.

“With Nick trying to get a gym opened up he’ll be able to train people and he’ll still be in the sport and at the same time he’ll have his life back. When you’re boxing you can’t really do anything [else], he can now. Obviously if he could he would still be a boxer, but rather than sit down and get depressed about it – with the help and the money he got as well – he’s turning it into something for the future.”