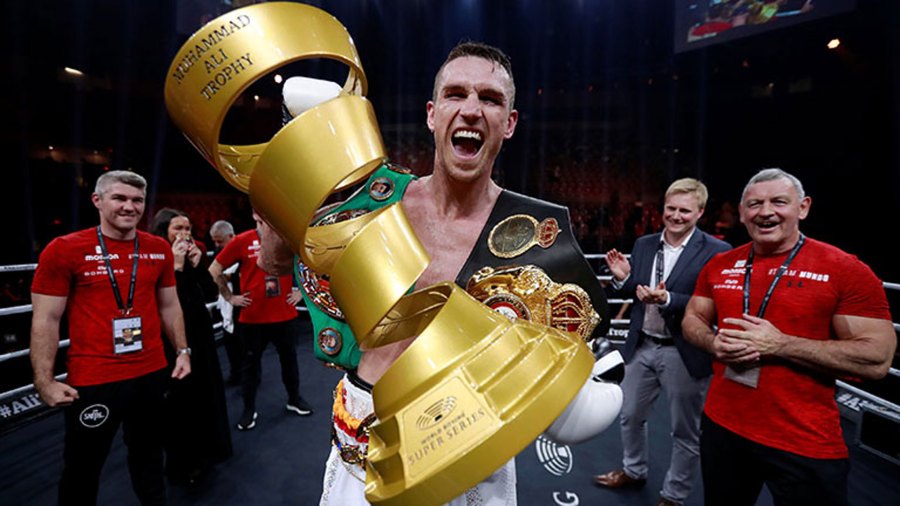 Callum Smith speaks to John Dennen about Gennady Golovkin and getting a rematch with an old foe, Dmitry Bivol

Smith defeated George Groves on Friday in Jeddah and has returned to England as the number one in the 168lbs division and World Boxing Super Series winner with a very bright future at the highest level of the sport.

“He’s a massive name,” Smith said of Golovkin. “I’m sure financially it would be good and a win over him is still a massive win. Even though he’s just lost, a lot of people didn’t think he did and it was a good fight. He’s had two very high profile fights with Canelo. I’d go as far to say he’s still the biggest name possible for me to fight. I think he’s a bigger name than the other light-heavyweights and the super-middleweights.”

If Groves hadn’t been fit to contest the Super Series final, Smith’s trainer Joe Gallagher had suggested Golovkin be invited in as a replacement. “I was thinking, Don’t you like me, Joe?’” Callum laughed.

But now, after stopping Groves inside seven rounds, Smith would welcome the opportunity to fight Golovkin at super-middleweight. “I think he would get people praising him doing it. But I think he’d get a bit of criticism for doing it because he’ll do it now but he wouldn’t do it when [Andre] Ward wanted him to, that kind of thing. He was saying he didn’t want to move up then, now he might move up. People might say, ‘What’s different now than then?’ But possibly I think he could. He’s a good fighter.”

One light-heavyweight whom Smith knows well is WBA world champion Dmitry Bivol. The two have fought before, in 2012 when they were amateurs. Bivol won that, a semi-final of the Bocskai tournament in Hungary, and Smith is keen to settle the score. “A Bivol rematch would be good. We had a good fight in the amateurs. He’s a good fighter,” he said. “I remember boxing him thinking he’s decent. He didn’t box then how he does now, he throws decent body shots now. It was a good close fight.

“You didn’t really see many of the top people you fight in the amateurs in the pros whereas now you’re starting to see more of them, more and more of the Russians and Ukrainians are turning over. Whereas you never used to see them two years ago.”

There are big fights ahead of him, even if it’s difficult to say now exactly what they will be. “It’s hard to predict, you never know. A new star could be born in a year who I’ve never heard of now or a top middleweight could move up to super-middle. It’s hard to predict,” Callum said.

First of all he wants to cement his place at the number one in the 168lbs division. “The weight isn’t killing me at the minute,” he said. “In the ring I felt good, I felt strong, my energy levels were good. I don’t think I’ll move up any time soon. There’s a lot I want to achieve at super-middle.”