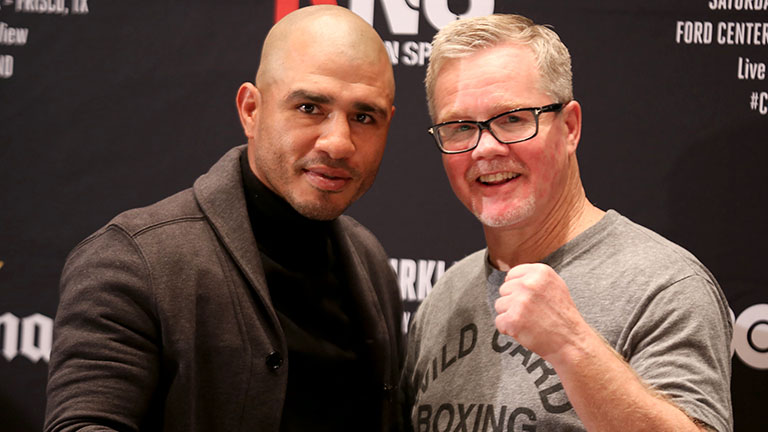 MIGUEL COTTO could be on course for a showdown with feared middleweight Gennady Golovkin. It’s the fight his trainer Freddie Roach has called for.

Speaking exclusively to Boxing News, Roach said, “He might have a big fight coming up because we’re talking him and GGG next. That’s a fight that I do not turn down.

“I like GGG. He’s a friend of mine. He’s a very good worker. He’s a hard fight for anybody, he’s a very, very big puncher. But I think he’s beatable and I think he was exposed a little bit in his last fight. We’re ready for that. It’s the last super-fight out there in the weight division and that’s who we want to fight in our last fight. We want to make history.”

This will be Cotto’s last year in boxing and he is expected to box on June 24, possibly against Japan’s Yoshihiro Kamegai. Roach has been setting up his training camp, also he will be with Manny Pacquiao in Australia at that time. “I’m not sure whether I’m going to fly back and forth. He has a lot of confidence in Marvin [Somodio], my assistant. Marvin’s doing really well. Marvin might be on his own for the first time in a big, big fight. But he’s ready for that,” Freddie said. “Miguel will train at my gym, his camp is all set up at the Wild Card. We’ve brought sparring partners in for his fight.”

Cotto has not fought since being decisioned by Saul Alvarez in 2015 but Roach wants that major fight before the end of this year. “Because he’s retiring before the end of the year. This is his last year boxing and he’s going to retire. He wants to spend more time with his family,” he said. “He’s been fighting for a long time and it would be a great ending.”