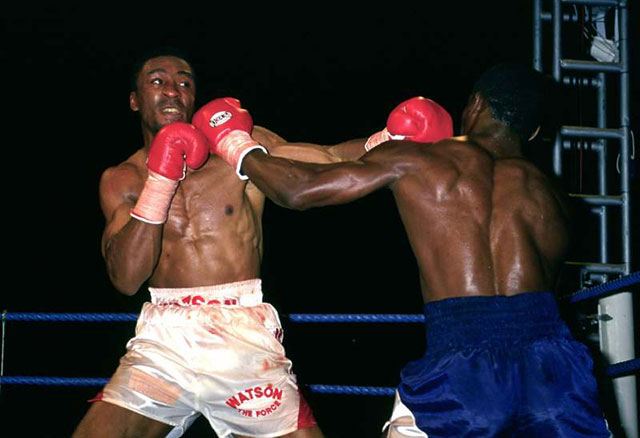 When he suffered a serious brain injury after losing to Chris Eubank back in their 1991 rematch, few expected him to make it this far. But Watson, again showing the incredible bravery that marked his in-ring career, redefined the notion of a fighter and has since, among other things, completed the London Marathon. On April 23, selfless Watson will host a fundraiser to celebrate his half-century and generate funds for the Teenage Cancer trust. Rather than bemoan his ill fortune, Watson believes his terrible injury – which led to six brain operations – was perhaps decreed by a higher power so he could aid others.

“I thank God for saving my life and providing the people to be around me,” Watson says. His speech is laboured but mostly lucid, his passion undimmed. “I thank God for my happiness in life. Everything happens in my life for a purpose. Since my accident I’ve raised money for the Brain and Spine Foundation and accomplished a marathon. I’ve generated a lot of machines for operations in the NHS.

“I’m doing well. My friend and carer, Lennard [Ballack], is helping me out for my 50th. With the money I’ll be raising I want to help people. This 50th will be a new beginning. My aim is to put back in the system. I thank all the people around me for helping me get to where I am. My carer Leonard, Peter Hamlyn who saved my life and Rory and Jimmy Barker, who gave me great encouragement in my life.”

Faith has long formed a vital part of Michael’s philosophy. It helped to sustained him during the frightening aftermath of the Eubank return and in his trials since, including six years confined to a wheelchair and learning to speak, write and walk again. He still sometimes thinks about that fateful night.

“I can visualise it,” he muses solemnly. “I can remember being in the ambulance but I was within a shell, I couldn’t speak properly. All I had to do was believe within myself that it was gonna be okay. It was like living a nightmare. All I could do was keep the faith.”

Watson could be forgiven for holding a grudge against boxing, having dedicated his life to a sport that would desperately fail him in his hour of need. The Board of Control’s provisions for his safety that September evening in Tottenham were later ruled inadequate but instead of becoming bitter or vindictive, Watson accepted a £400,000 settlement which safeguarded the Board’s existence. He moved on though still retains some strong opinions regarding the governing body and boxing as a whole.

“I showed the Board loyalty,” he recalls. “But the real Board of Control should be ex-professional boxers, ex-fighters. They’ve got the experience to know what other fighters are going through in the ring. Not people who’ve never put a pair of trainers on in their lives. You can’t have people who know nothing about the sport. What do the Board know about boxing, to take control? It should be professional fighters in that role.

“Boxing is in my system, it’s the sport that made me who I am. Boxing has been too watered down, it’s the politics, it’s all about the money. How can we have several world champions at the same weight? I’m the original world champion. Everyone knows who I am; I have nothing to prove. I was the first man to put down both Chris Eubank and Nigel Benn in the ring. I made them look ordinary when they were at their best.”

Watson and Eubank became genuine albeit unlikely friends, with Chris set to attend a cancer fundraiser on April 23. Michael Watson always puts the happiness of others before his own and his closing message is truly inspirational: “Keep the determination and keep the faith. Believe in yourself and just don’t quit.”

*Join Michael Watson for his 50th birthday celebrations and Teenage Cancer Trust fundraiser on April 23 at the Park Lane Hotel in London. To book a table or an individual ticket, please contact Geraldine Davies – recently appointed the UK PR director for the WBC – on michaelwatsonmbe@aol.com.