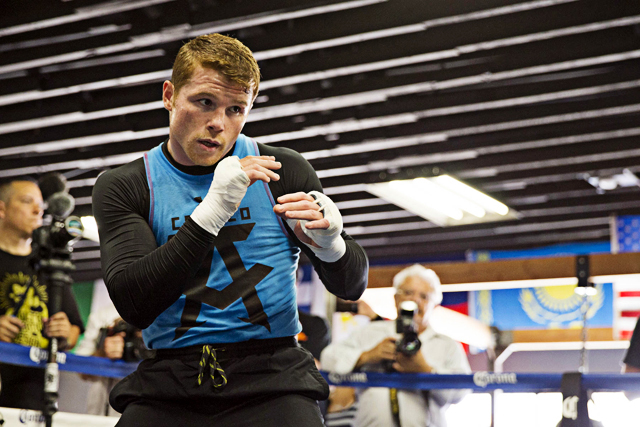 After shrugging off defeat to Floyd Mayweather, Saul Alvarez could be in line to fight Miguel Cotto. Thomas Gerbasi met 'Canelo'

IT takes a fair bit to break the poker face of Saul “Canelo” Alvarez, but when told that he could fight his interviewer at Minute Maid Park in Houston, Texas, on May 9 and still sell the place out, he couldn’t help but laugh.

Maybe it was due to the fact that said interviewer fought once in the New York Golden Gloves and was knocked out in 63 seconds, or that the idea of being that big of a star to warrant such praise isn’t as far-fetched as it might have been a few years back. Regardless, Alvarez is thankfully not fighting a reporter in May, but one of the most dangerous punchers in the game in James Kirkland, and while deciding to opt for such a foe may be seen as an admirable move in the eyes of the media and fight fans, it’s not something he thought twice about.

When it comes to pure action, the 12-round non-title bout can’t help but deliver, and it’s the perfect fight for Mexico’s Alvarez to kick off his 2015 campaign with, especially following a split decision victory last July over Erislandy Lara, a Cuban who is notoriously tough to look good against. With Kirkland in the ring, he won’t have to look hard to find him, though Alvarez is non-committal when asked if the Texan’s come-forward style played into his decision to choose him as his next opponent.

“I don’t really worry about that,” he said. “I can’t say for sure whether it’s a better style or not, but he comes to fight, I like to fight, and it’s going to be a fight that the fans will enjoy, and one that’s going to bring out the best in both of us.”

At 24, Alvarez is at once the perfect icon for today’s boxing world and a far from typical one. With red hair and freckled face, he looks more like a star of Mexican telenovelas than the prizefighters who have hailed from that country in the past. Erik Morales, Julio Cesar Chavez or Salvador Sanchez he’s not, but it’s that unique look that first put him in the sights of his promoter, Oscar De La Hoya of Golden Boy Promotions.

Alvarez’ gaudy unbeaten record didn’t hurt in prompting De La Hoya to sign him and introduce him to fans in the United States, but skeptics were everywhere, having seen plenty of Mexican fighters come over with lofty unbeaten records filled with unknowns, only to get destroyed when faced with an opponent who fought back.

Canelo was different though, and as he worked his way through quality foes just below the elite level, he began to make believers, capping off the first step of his world domination strategy with a decision win over Matthew Hatton in March of 2011 that earned him the vacant WBC light-middleweight crown.

The fights would only get bigger, with notable wins over Shane Mosley, Josesito Lopez and Austin Trout making him a star not just at home in Mexico, but in the States as well, and setting up the biggest fight of 2013 against pound-for-pound king Floyd Mayweather. That bout set records, but the only one Alvarez cared about was his won-loss slate, and on that September night in Las Vegas, he suffered defeat for the first time, dropping a competitive majority decision to Mayweather.

“I learned so many things. One of the things that was very important was to not fight outside of my weight division,” Alvarez noted of the bout, which was fought at a catchweight of 152 pounds, technically in the light-middleweight class, but a struggle for the then-WBA and WBC champion to make. “That’s something that affected me. But being so young, the experience that I gained will help me win in the future, in bigger fights and bigger events. There were so many things that I gained in that fight that I can’t pinpoint one, but it was a great experience and it will make me a much better fighter.”

Bigger fights and bigger events? It’s hard to think of one bigger than a rematch with Money Mayweather, but the odds of that happening are pretty slim at the moment. For some fighters, not getting the chance to avenge a loss would be something to haunt them forever. Alvarez isn’t one of those.

“It’s something I’m not going to dwell on,” he commented regarding a rematch with the only man to put a loss on his 44-1-1 (31) record. “I’m gonna continue on with my career and do what I have to do. If, God willing, I ever do get to fight him again, it would be great, but if not, I’m going to move on with my career.”

After Mayweather’s superfight with Manny Pacquiao the week before Alvarez-Kirkland, there will likely be a reworking of the definition of ‘big fight’, yet once that’s done, expect the new paradigm to routinely include the Juanacatlan native, who did try to secure a megabout of his own for his first appearance of 2015 against Puerto Rican superstar Miguel Cotto. Negotiations broke down though, leading Canelo to move on to Kirkland while Cotto signed up with Jay-Z’s Roc Nation promotional group.

“I don’t feel that bad about it,” Alvarez insisted. “We made a great effort in making the fight, we did everything we could and it wasn’t able to get made. Obviously my concentration right now is May 9 and Kirkland, and I’m very happy that I have a fight, I have a date, and I have an opponent that people are interested in. The fans are going to like this fight, and if it (a Cotto fight) happens in the future, it will happen. But right now, I’m concentrating one hundred per cent on Kirkland and May 9.”

All fighters will say that, yet few sound as convincing as Alvarez does when he declares that he’s focusing on his upcoming bout and nothing else. It’s another thing that separates him from the pack, a calm and mature attitude that is rarely seen in a 24-year-old idol to millions.

“Canelo is very unique because he is so mature for his age,” De La Hoya said. “He doesn’t have any bad habits, he loves his craft, and he respects what he does. Therefore, I believe Canelo will be a champion for many years to come.”

The fighter brushes off such praise, insisting that his cool under pressure and in the public eye is simply something that comes naturally.

But was he always so mature, even as a youngster?

He’s been fighting for much of his life. The youngest of eight children, Alvarez has six brothers, all of whom stepped into the ring at one time or another. Alvarez put on the gloves for the first time at 13, and he never looked back, never wanted to do anything else with his life but fight.

“I’ve always loved boxing, I’ve always been passionate about it, and it’s something that I’ve always wanted to do,” he revealed. A decade after his first trip between the ropes, he’s one of the sport’s marquee figures, a young man whose appeal can be boiled down to a simple formula of good looks, an exciting style in the ring, and a boy-next-door image that is aided by the fact that there are no scandals brewing, no incendiary statements flowing, and no hint of menace anywhere but in the ring. Add in Alvarez’s insistence that he’s not burned out on the sport, despite 46 pro bouts, and you’ve got a fighter who can stand to make millions for years to come.

“Thank God I haven’t got to that point, and it’s a balance,” he remarked. “It’s good to have your rest, but also to train hard and work hard, and I’m happy. I just think I do the best with what I have. Obviously, I get my rest between fights, and then I get to work and I work hard. I’m very fortunate that I’ve been able to distinguish between the two.”

It’s a good place to inhabit for Alvarez, because if he’s survived a life that has not been his own for the last few years, with every move documented by the worldwide media, such intrusions are not likely to get to him now. That’s important, because at this point, things will only continue to grow, especially with his youth and fan appeal putting him in the position where he is ‘the Golden Boy’ of Golden Boy Promotions in the Al Haymon takeover era. In other words, as long as he’s around, De La Hoya’s firm will remain a major player in the sport, and Alvarez appreciates and accepts the role of ‘The Man’ for the promoter.

“Coming from Oscar, it’s a motivation,” he said. “If Oscar says that and he feels that way about me, it motivates me and makes me want to do better.”

Alvarez will do better. There’s been nothing displayed as of yet to think otherwise. But for all the money, the fame and the big fights, the young man with the red hair and freckles would ultimately be happy with something you can’t put a price tag on: respect.

“That’s exactly what I’m looking for, and I want that,” he asserted. “I respect the sport and I would love for everybody in the sport to respect me. I think that it’s a very important thing for me. That’s why I give my best – I want to be respected.”

MIGUEL COTTO-DANIEL GEALE AS IT HAPPENED