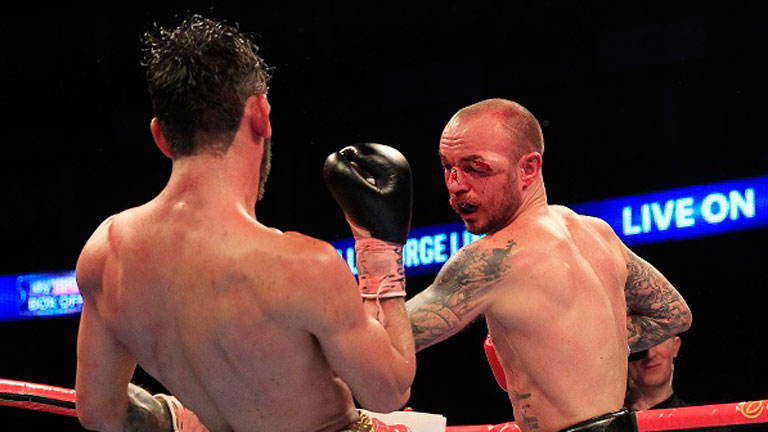 KEVIN MITCHELL intends to box for the European lightweight title despite considering retirement after his recent stoppage loss to Ismael Barroso.

In a final eliminator for Anthony Crolla’s WBA world title, Barroso stopped the Dagenham man last month with a vicious right hand in the fifth round.

The defeat was Mitchell’s fourth as a professional – all inside the distance, including a vicious affair with WBC champion Jorge Linares last May – and with two previous failed attempts at world honours, the 31-year-old almost packed it in.

“Thoughts of retirement have crossed my mind. After the Linares fight I spoke to Tony [Sims, his trainer] and he said he’d liked me to have one more and then call it a day,” he told Boxing News.

“I’m not one of these people to say silly things and pretend I’m better than I am, I know when it’s time to call it a day. After this fight, I told him I would if he wanted me to. I don’t want to kid my fans and let them down by getting in there with medium-level fighters and struggling.”

Mitchell confirmed he will continue to fight and also revealed he will likely travel to Finland in March to fight Edis Tatli for the European belt.

After his loss to Barroso, plenty of observers took to social media to urge Mitchell to retire and while he concedes fans’ right to have their say, Kevin states they do not have all the facts.

“Everyone’s got their right to comment on things, but they don’t live my life,” he mused.

“They’ve never lived a fighter’s life, I live a very different life to the average person. People don’t understand the life you lead, making the weight and things. There are a lot of elements to the fight game and when you go out on that night and you either get the job done or you don’t.”

Mitchell entered the ring as a betting favourite against Venezuela’s Barroso but the visitor proved a handful from the outset, dropping Kevin in the fourth before finding the finish in the next stanza.

While Mitchell admits he underestimated Barroso, he also revealed he almost pulled out of the fight altogether due to weight issues.

“I don’t think I did my weight right in my last fight, I was struggling to make the weight,” he said.

“I came into camp too heavy and left it too late to lose the weight. We almost pulled the plug on the fight three weeks before the show, but then I tried to get the weight off. It weakened me, as soon as I took a shot I hit the deck.

“Preparation went great, I was looking sharp, I was fine in sparring. Training camp went well, I was just heavy. Three weeks before the fight I was a stone over the weight.

“Since I’ve been with Tony, I’ve made the weight properly. I don’t know what it was that time, I struggled. It’s one of those things. The guy I fought had better feet than I expected, he was more with it. I thought he was going to be a clumsy fighter. Also him being a southpaw didn’t help. It was a good shot he caught me with. Tony said to me as well, ‘when you don’t make weight right, you’re as weak as a kitten.’”

In a candid admission, Mitchell holds his hands up and says he overindulged after his fight with Linares.

“I think it was just a one off. I’ve never not made the weight properly before. After the WBC title fight [with Jorge Linares] I enjoyed myself, ate loads, put on weight and had a bit of time chilling out,” he admitted.

“I came back into camp too heavy. It was a killer, but it’s my own fault. Losing weight is a killer, I’ve been doing it for so many years, 21 years now, so I should know how to get it off but as you get older it gets harder to get it off. I’ll get it right this time around, over Christmas I’ve not been that bad. For the last camp I started at 11st 7lbs, for this one I’m at 10st 13lbs so it shows the difference.”

Barroso scuppered Mitchell’s plans of a big domestic showdown with Crolla and is now the Mancunian’s mandatory challenger, though Kevin doubts his close friend will fulfill that obligation.

“I’m pretty sure Crolla won’t go down that route, it doesn’t make sense does it? This game’s not about the titles, it’s about finance and money,” he said.

“If it was me, I would look at it as, you’ve got Jorge Linares or Barroso – what brings more money to the table? You’ve got a good chance of losing to both, and you’ve also got a chance of winning. It’s the fight game, I imagine he’ll go down the Linares route. I’d rather see him do that. He would make a lot more money doing that, it makes more sense for him and his family.”