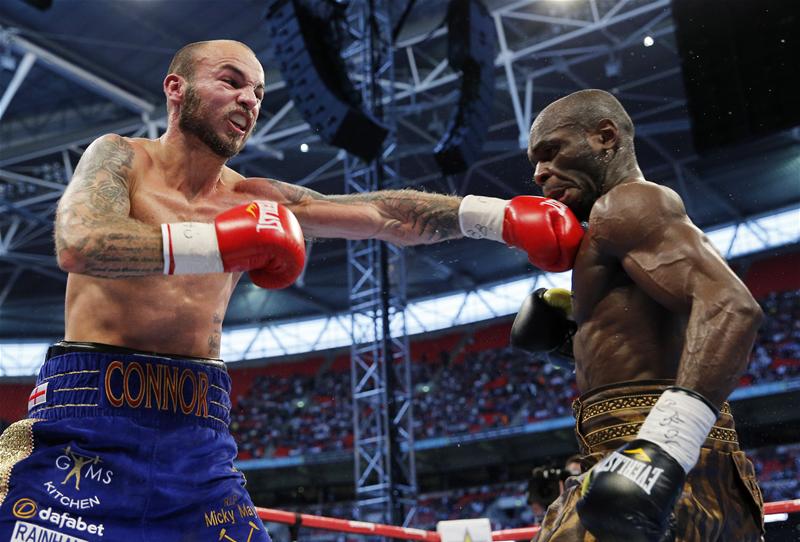 FORMER lightweight world title challenger Kevin Mitchell does not believe WBC world champion Jorge Linares will grant him a rematch to their exciting clash in May.

The champion stopped Mitchell in the 10th round, badly swelling and cutting the Dagenham man’s face despite the Brit’s impressive showing in the earlier rounds.

Since then, Linares has recently spoken of his interest in holding a rematch in his native Venezuela but Mitchell does not take him at his word.

“I’m not that confident of making the rematch with Linares. These fighters say they’ll fight me and then offer me £10, 000,” he told Boxing News.

“Him saying he’ll fight me in Venezuela is like him saying, ‘I don’t want to fight you’ because it won’t make any money, what’s he going to sell, like 500, 1,000 tickets? It doesn’t make sense.

“He talks about fighting in Venezuela but I bet he doesn’t sell any tickets there because he always fights in America or Japan, he’s all over the place. He doesn’t sell tickets, he’s a three-weight world champion and hardly anyone knows him.”

Although born in Venezuela, Linares lives in Japan and has only fought in the country of his birth three times as a professional.

Mitchell, who is aiming to be back out in December, insists he would be willing to travel to Venezuela to fight Linares and still has a chip on his shoulder after their meeting in May.

“I had him beat, he knows I had him beat. What annoys me about our first fight are the head clashes, even though we were in my country,” he claimed.

“He head butted me once and then kept doing it, I had two cuts over my left eye, he butted me on the bridge of my nose and reopened a cut there.

“You would expect him to get away with that if we were fighting in Venezuela, but not in my country. The only reason he won was because of the cuts, it’s clear that he knows I had him beat but if he wants to get it on, let’s get it on.”

Mitchell believes the fight would sell out an arena in the UK, he mentioned the O2 Arena, where they met in May and Upton Park, the stadium of the football team he supports, West Ham.

The 30-year-old is not waiting around for Linares however and has his sights set on all of the world champions at his weight.

“I’m not being big-headed or anything but I look at the weight division and I’m the biggest threat to the current world champions. I would fight any of the champions.

“I’d fight the winner of Darleys Perez-Anthony Crolla, that makes sense. Hopefully Crolla beats him and I can fight Crolla.”

CLICK HERE FOR A VIDEO INTERVIEW WITH ANTHONY CROLLA