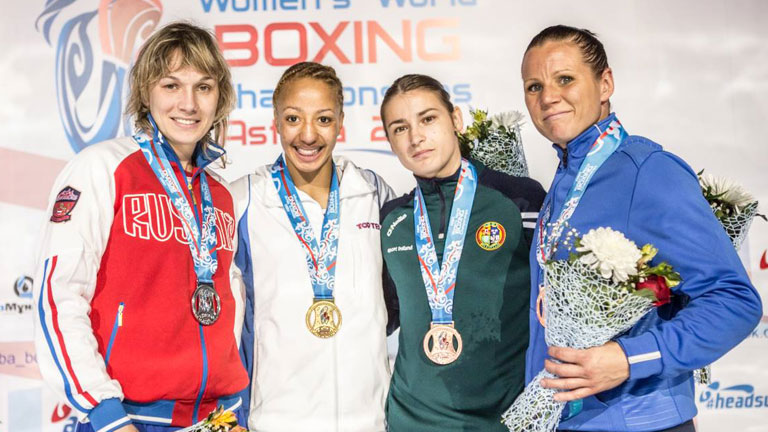 A BRONZE medal does not sit easily on Katie Taylor’s shoulders. On Friday at the Barys Arena in Astana, the finals of the Women’s World Championships went on without her. In the last five editions of this tournament Taylor has won the gold medal. Before 2016 Taylor, the reigning Olympic lightweight gold medallist, had been unbeaten in four years. That winning run was snapped at an Olympic qualifier in April, when Katie lost to Yana Alekseevna. Taylor then suffered another shock defeat against Estelle Mossely in the semi-finals here in Kazakhstan. That decision denied Taylor the chance to win a record-breaking sixth World gold.

On Friday Taylor took to the podium for the 60kgs medal ceremony, where she stood only in third place. She posed with professional courtesy for pictures with that bronze medal round her neck and then, with the duties done, headed backstage, slipping the bronze medal off at once.

Speaking to Boxing News, Taylor reflected, “It’s been hard to take but I’m just trying to take the positives for it really. I have qualified for Rio, which is a huge deal for me. I’m just going to go back and focus on that now. It’s not what I want. I’m very disappointed.

“My focus was pretty much on defending my World title here and in doing that I would have qualified for Rio. It was the same before London as well, we had to qualify through the World championships so it was pretty much the same thing. That wasn’t really a factor. It’s always really hard to take – my second loss in the space of a few months.

“You live and learn, don’t you? Hopefully in the next few months I’ll make things right. In a few months time, if I have the gold Olympic medal around my neck again I won’t be thinking about this moment. So that’s my plan, that’s my goal. I’m going to do everything I can to make that happen.”