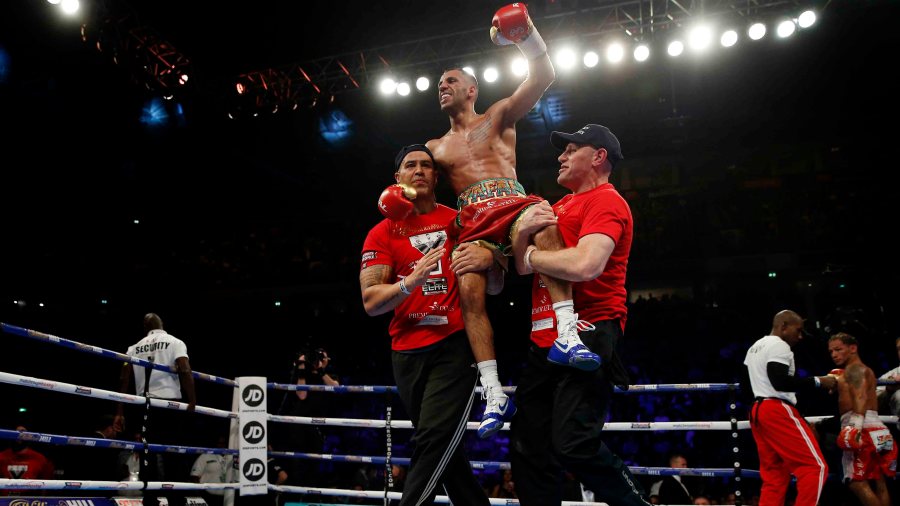 I’ll be making my first defence in Birmingham on May 13 [at the Barclaycard Arena]. The opponent and all the other information will be sorted out.

I’ve had a bit of time off over Christmas and the New Year, now I’m back in the gym just ticking over, just working on a few things.

When time comes to step on the gas I know I’ll be ready to go. I can have confidence in my fitness and my conditioning.

Is it hard for you to make the weight?

It’s not easy by all means. Obviously it’s difficult. There’s a lot of boxers that struggle doing weight, I know there are people that are a lot worse off than what I am but it is obviously difficult. I do need time. But when I do it and I do it right, it’s not a problem.

What was going through your mind when Luis Concepcion failed to make weight for your world title fight?

I was just thinking about myself more than anything. I was thinking what’s next?

Were you worried he’d pull out of the fight?

Not really. Obviously he’s come a long way and by the looks of things he’d had a good training camp.

I had journalists phoning me from Panama talking to me about the fight and saying he’s in great condition, they’d seen him training in the gym and things like that. You see things on twitter and things like that. He’d been training a long time for the fight and looked in good shape, strong. I was shocked with him coming in that much over the weight.

I had options. I could have pulled out the fight as well. I had that option of pulling out.

No. I sat down and [was told] ‘you could pull out the fight, there’s no problems and then you fight the next man in line for a vacant title, and probably do it in Birmingham in April or May.’ But I was thinking to myself I’ve trained as hard as I can for this fight. I’ve sacrificed a lot. I’m in the best shape of my life. That was the exact words out of my mouth – I’m not going to give up this opportunity, everything I’ve done, over a couple of pounds. Even though it was a couple of pounds then, it could be worse the next day.

Someone who’s strong, put that extra weight on him, he’s going to be stronger. But it was just one of them You know what, I’m just going to get on with it, get it done.

Were you expecting it to be as clear a victory as it was?

I thought it’d go two ways. I thought it could possibly go that way, even though that’s what I expected least. I expected to be in a tough kind of fight with him where it’s back and forth and then I end up catching him in the later rounds and putting him away. But the thing was is the way it went is what I trained for. They were the tactics the whole time, from the moment we agreed to that fight, the instructions were you either keep it long with him or we’re in really close. There’s no mid range. Because that’s where he wants to be. He wants to be throwing hooks and uppercuts at mid range. Whereas we want to keep long and as soon we’ve landed and done what we need to do at long range, then completely shut him down. And that’s what I did.

What was that moment like when you finally got the world title?

You get a flashback of memories through your whole boxing career, just one after the other, the good times, the tough times, everything. It was a very, very special moment for me.