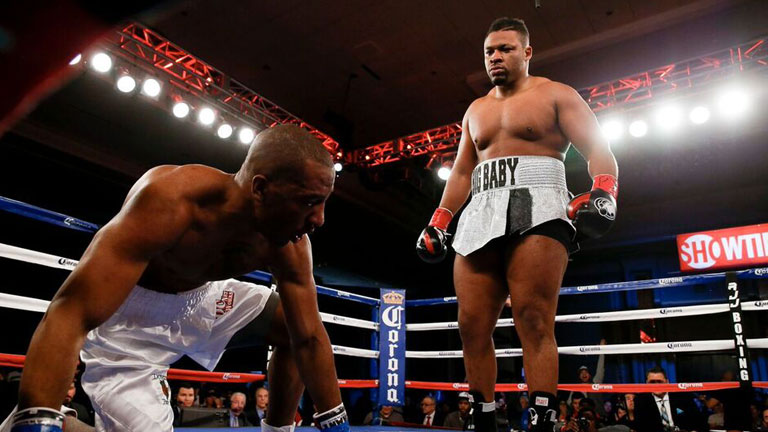 NEW YORK’S Jarrell Miller improved to 16-0-1 (14) this past Friday, when he scored a seventh round TKO over Donovan Dennis. A pro since July of 2009, Miller (who has also fought in MMA and K1) says he will win his first world title by the end of 2016 and then look to unify.

A quick talker with a colourful personality, the 27-year-old, approx 270-pounder has yet to go further then seven-rounds and he says he wants a couple of ten-rounders before he launches his inevitable assault on the world titles.

Q: Congratulations on the stoppage win over Donovan Dennis in Friday (January 22). How is your shoulder now, you said post-fight how it “popped” in the opening round when you scored two knockdowns.

Jarrell Miller: “It’s getting better, I have ice on it. The doctor said to rest it, it’s in a sling right now. It’ll be okay, nothing too serious as long as I don’t go lifting any crazy weights or anything like that. So I should be back and good to go in two or three weeks, hitting the bag again.”

Q: Was the win over Dennis the best yet, or the best performance so far from you?

J.M: “Oh, definitely not! I gave myself a four out of ten for that performance. I’m much better than that. I wanted a KO so bad, and I should have gotten rid of the ego quicker than I did and refocused and concentrated on my game-plan. That’s what my corner were telling me, to box, box, box. Thankfully I did listen to them and realised not to just slug.”

Q: You called a number of fighters out after the win, including Deontay Wilder and new IBF champ Charles Martin. Ideally, who would you like to fight next and when?

J.M: “I want all the champions. I need to get my first world title belt first, which I am aiming to do by the end of this year. I want two more 10-rounders in first, to see how the shoulder holds up. I’m always mentally ready, I want to be physically ready. We’re looking at April, the 22nd I think it is, on ShoBox again and after that I wouldn’t mind a title shot by the end of the year at all. I’m getting my weight down and I’ll be ready.”

Q: The heavyweight division is exciting and full of talent again. Of all the young and unbeaten American heavyweights, you feel you are the best?

J.M: “Oh, yes. The only thing is getting the opportunities. I’ve not had some of the  opportunities the guys who are signed with Al Haymon have had. But the proof is in the pudding, I’m an unbeaten kick-boxer, but I got robbed, and now I’m making the full transition into being a boxer. I’m focusing on my craft. I’m an amazing boxer, I know that for a fact. I’m now focusing just on boxing, my boxing craft, for the next three to four months. It’s about getting the ego out of it and not just looking to knock everyone out.”

Q: Are there any U.K heavyweights you’d like to fight, apart from Tyson Fury of course?

J.M: “Well I don’t like Anthony Joshua at all. Him and Tyson Fury, they’re the only ones [from the UK] that I want to knock the f**k out.”

Q: Everyone is talking and wondering how Fury’s rematch with Klitschko will go. What is your pick?

J.M: “I did think Fury would get knocked the f**k out [in the first fight with Wladimir] to tell the truth. I sparred Tyson, he wasn’t really anything, he couldn’t hit me with a handful of rice. I don’t see him defending the title for too long but he won the first fight so he can win the second. It depends on which Wladimir turns up. But I hope Wladimir wins so I can knock him the f**k out myself!”

Q: You’ve been compared by some to Riddick Bowe….

J.M: “Absolutely. I’m a great body puncher. I’m glad some people saw holes in my game [in the Dennis fight] because now I can go fix them. I had a stuffy nose and some allergies going into the fight but you have to fight through adversity. I don’t have the luxury of a David Haye, pulling out of a fight with a torn muscle or something like that. I’m a warrior. A lot of these fighters, they aren’t warriors like me.”

Q: You have done kick-boxing and MMA – which is tougher, that or boxing?

J.M: “They’re both tough sports. You want the most output from the amount of input, and boxing gives me the most from what I put into it. So I’m focused on boxing now.”

Q: How did you get the nickname, Big Baby?

J.M: “(laughs) The fans love it. My first manager gave me it and I like it and it’s stuck.”

Q: Finally, of all the current heavyweight titlists: Tyson Fury, Deontay Wilder, Luis Ortiz, Ruslan Chagaev and Charles Martin, who do you think is the best?

J.M: “I actually think it’s Tyson. He’s fought the better opposition. He has heart even if he doesn’t have all the skills. Deontay, he’s still a yellow belly to me and his chin is definitely suspect. And Martin, he won the title on a fluke.”