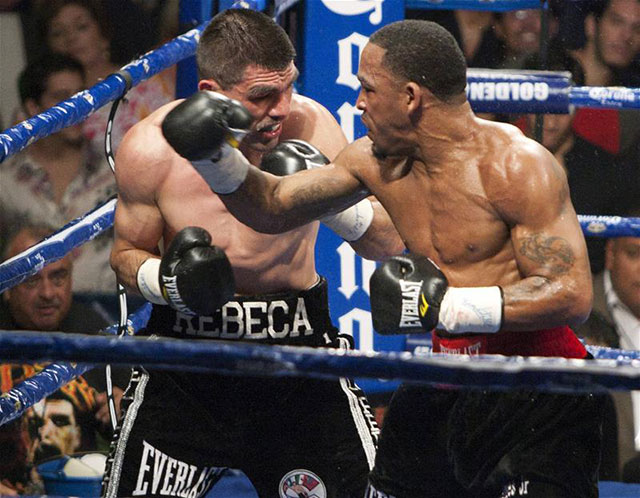 THE name of Rick Morones Jnr may not be overly familiar to most fight fans, yet the 29-year-old, along with his father, heads The Team Morones Boxing Club in San Antonio, Texas and, more significantly, Morones Jr is currently working with Texan banger James Kirkland as he gets ready to face Saul “Canelo” Alvarez next month.

Along with strength and conditioning guru Bay Bay McClinton and co-trainer Gerald Tucker, Morones Jr is currently pushing southpaw Kirkland as hard as can be in anticipation of scoring the upset win on May 9th.

Here, Morones Jr speaks about his experience as a boxing trainer and the fast approaching fight he is sure will be explosive:

Q: First of all, how long have you known James Kirkland and have you worked with him before in  training for a fight?

Rick Morones: “I’ve known James for a while; I’ve always seen him around at fights. But this is my first camp working with him. I never really knew James personally before. But for this fight, we are a team – it’s myself, Bay Bay McClinton, who is James’ strength and conditioning guy, and Gerald Tucker; he’s putting in so much hard work with James in the gym. It is very much a team effort.”

Q: And who have you trained or worked with before?

R.M: “I co-trained Wilfredo Vazquez Jnr (former WBO super-bantam champ), when he fought on the Miguel Cotto-[Sergio] Martinez card in New York; I assisted Nacho Beristain. Currently I have eight fighters, prospects, some of whom are world rated, who I am working with here in San Antonio. I’ve been around [boxing]. My mentor was the late great Emanuel Steward and I’ve also worked with great trainers Joe Goossen and Henry Ramirez. I’ve been picking up knowledge from people like this for the last 11 years. I’ve been around camp with the Mayweathers. But this fight, this is my biggest shot I guess you could say. I’m ready for this test.”

Q: What type of fight are you expecting on May 9 – a physical fight, where Kirkland really tries to make things hot for Canelo?

R.M: “A physical fight definitely, yes. We want to take Canelo into the deep waters and see how he responds. We’re definitely going to test his chin. We want to test his conditioning as well, his physical and mental conditioning. James is a fighter who always comes to fight, whoever it’s against, and he will look to push Canelo to the absolute limit. Canelo has never faced a fighter like James Kirkland before. This fight is a real risk for him [Canelo] and he deserves credit for wanting to take the big fights, against the Mayweathers, the [Erislandy] Laras and for taking this fight.”

Q: Do you feel James’ southpaw stance will be a big factor? Canelo struggled with Lara, although Lara is a different style of fighter to Kirkland even if they are both southpaws.

R.M: “Well first of all, I think Lara won that fight. I think he deserved the win. But James is a totally different animal. He’ll be bringing so much pressure and like they say, pressure bursts pipes. A lot of fighters, they don’t like pressure, and James has intense pressure. James will be throwing left hands down the middle and hooks over the top. We want to see how Canelo copes with that pressure. As we’ve been saying, we’re ready for whatever Canelo brings and we will be one step ahead at all times.”

Q: What would you say to the critics who say James’ chances of winning are compromised because he is not working with Ann Wolfe for this fight?

R.M: “People can say what they want to say. That’s life. It takes no time or effort at all to say or to write something negative, in an article. I won’t allow that negativity to disrupt what I’m trying to do; what I am going to do. I’m going to follow in the footsteps [of the great trainers I’ve worked with in the past]. People will always say what they want. Look at Emanuel [Steward] God rest his soul; some people say he wasn’t a great trainer. Some people say Muhammad Ali wasn’t a great, great heavyweight. You can never make everybody happy. We are a good team, we are all working hard and we will achieve success as a team. You can really expect fireworks in this fight!”

SUBSCRIBE TO BOXING NEWS – established in 1909 – AND SAVE MONEY