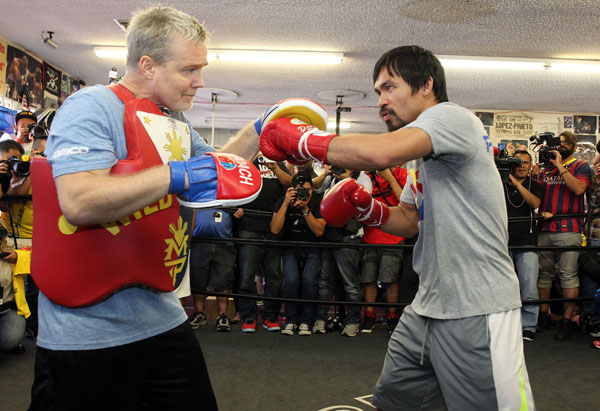 FREDDIE ROACH wants Manny Pacquiao to fight Danny Garcia once the Filipino returns from a shoulder injury he aggravated during his fight with Floyd Mayweather.

After having surgery on the injured shoulder, Pacquiao is sidelined until 2016 but is currently undergoing rehabilitation.

Speculation has been rife over who the former multi-weight world champion will face when he returns to the ring, but his trainer, Roach, told Boxing News who his pick would be.

“I want Danny Garcia, that’s my choice. That’s the easiest fight in the f****** world, you can tell his dad [Angel Garcia] that as well,” he said.

“His dad psyched Amir Khan out but he won’t psych Pacquiao out I promise. Pacquiao will knock Garcia out. I like the dad but he talks too much s***.”

With Garcia, an Al Haymon fighter, now regularly fighting in the Premier Boxing Champions series and Pacquiao operating under HBO, the fight would be a difficult one to make.

Roach also revealed Pacquiao’s rehabilitation is going well but confirmed it will be months before he fights again.

“Manny’s shoulder is getting better. We had a little trouble with the rehab because he didn’t want to come to American so we got a guy to go out there [to the Philippines] and work with him every day,” he said.

“He tells me it feels better, he went swimming the other day, he’s playing a little basketball so he says it’s coming along fine. But it won’t be a while until he’s in the ring again, three to six months.”

Amir Khan, who used to train alongside Pacquiao under Roach, has expressed his desire to face the Filipino while Bob Arum, Manny’s promoter, has also said the fight could happen next year somewhere in the Middle East.

While interested in that fight, Roach remains doubtful it will happen in Dubai, where it has been rumoured to land.

“I’d definitely be interested in the fight. They’re two fast guys, they have history as they’ve trained together, sparred a few rounds together and it’s a good fight for both guys,” he noted.

“People have spoken to me about a fight with Amir, he has some friends who train at the gym and they’ve asked me to sit down in some meetings to discuss it.

“The thing about those guys from Dubai, they talk like they have a lot of money but they never put it up, so I’m not really concerned with that at this point. How many years have we heard there’s going to be a big fight in Dubai? Way, way too many.

“If the money comes through, I think it’s a great fight.”

Since losing to Mayweather in May, Pacquiao has stated his desire for a rematch several times and while he is not sure it could happen, Roach maintains his charge would gain revenge.

“I don’t know where Mayweather’s going right now. I don’t think he’ll stop at 49 fights, I think he’ll fight to 50. I’m hoping that he promotes himself, maybe if he does he can make more money,” he said.

“Manny would do much better in a rematch, if the shoulder gets better. We were doing well until the shoulder went in the fourth round and we had a tough time after that. I do think we can beat Mayweather 100%.”