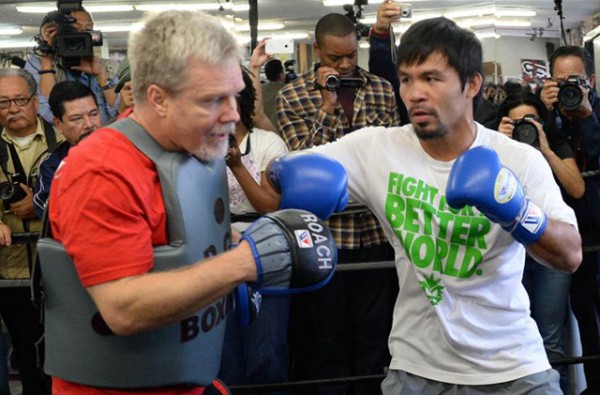 GIVEN that Floyd Mayweather versus Manny Pacquiao is the biggest fight of the 21st Century, it was announced with relatively little time left before the May 2 extravaganza. Manny Pacquiao left the Philippines, where it was getting “too crazy” to train, to begin his training camp at the Wild Card gym about eight weeks out from the Mayweather fight.

Pacquiao’s trainer Freddie Roach, speaking exclusively to Boxing News, insisted that is plenty of time. “Usually an eight training camp is a little bit long for Manny because he works so hard. I worry about burning him out a little bit. The six week training camp I’ve developed with Manny, it works better for him. We do the first two weeks strength and conditioning with Justin [Fortune] and then six weeks out we start sparring,” he said.

The sparring began this week, with five rounds on Tuesday against two different sparring partners. For this camp his trainer plans to reduce the number of rounds Pacquiao spars in total. “We used to spar 150 rounds but I’m going to cut that back because he doesn’t need those long wars anymore. He’s a veteran. I’m looking more at 95 rounds of sparring,” Freddie said.

When he spoke to Boxing News, the trainer was loath to reveal the names of the sparring partners, in case the other side tried to lure them away. “That’s how worried they are,” Roach claimed. “They’re very unprofessional people and stuff like that. They think they’re being clever with little things like that but the guys I have are my guys. They’re not going anywhere.”

But they are tasked with imitating Mayweather both in fighting style and demeanor. “I truly believe that you must get ready for what’s in front of you. I really do. Stylewise is important but I get a couple of guys that talk a lot, they fight like Mayweather because they kind of idolise him as a fighter and most of these guys want to be like him, or want to be him. I know them. They’re talking to Manny, giving him some s***. I’m happy about that. Manny’s going to have to get used to that. Mayweather, on the inside, he talks a lot,” Roach explained.

Intriguingly, given that Pacquiao is known for his aggressive style and Mayweather for his defensive artistry, Freddie believes that counter-punchers are a dying breed in boxing today. “You don’t see counter-punchers too much any more because usually they’re losing fights until they knock you out,” he suggested. “You rush in and they go on the back foot and look for that big hook and so forth. The counter-puncher today, it’s very old school but I think it’s a thing of the past. You don’t see that a lot.”

The confidence emanating from Pacquiao’s camp is striking. Roach has been honing his gameplan for the Mayweather fight for five years. He invested himself personally in making it happen. “I’m really happy I made that move. I wanted that fight for Manny so badly I probably went out of my boundaries a little bit. Les [Moonves, chief executive of CBS] contacted me because he thought Manny was a free agent. He wanted to meet Manny,” Roach explained. “He thought he was out of contract and wanted to talk to him. [Roach said,] ‘You’ve got to talk to Arum.’ [Moonves said,] ‘He’s the devil.’ From being the devil, when I finally got them together, after the meeting we had, they walked out with their arms around each other. I said this fight is going to happen. I got the right two guys together, so we needed that. But it wasn’t easy because they were pissed off at each other.”

Even though this fight is as big as it gets, Freddie doesn’t expect to slow down himself any time soon. “This is what I choose to do for my life. I love my job. You know what, I think I have the best job in the world. If I didn’t go to the gym and work 12 hours every day, what would I do? Sit home and watch TV? Jesus, that would be terrible,” he said. “Boxing kind of takes over, yes it does.”