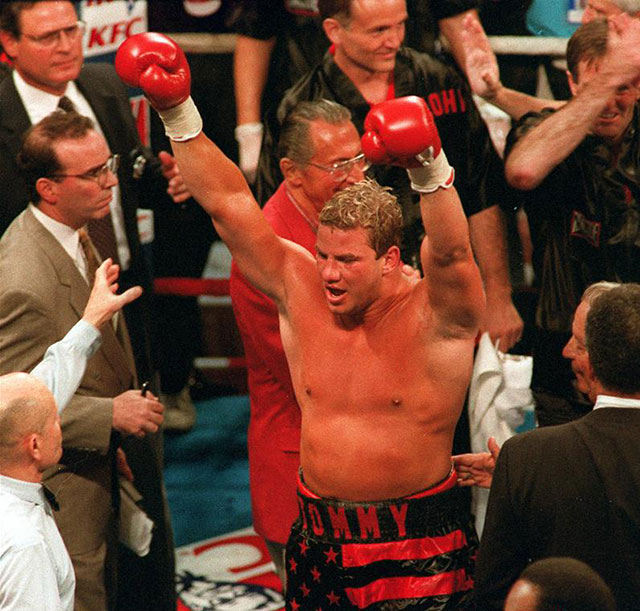 TREY LIPPE MORRISON is the latest addition in the seemingly ever growing number of “boxing juniors.”

Currently attempting to make his own name in the sport while following in the footsteps of his a famous father, former WBO heavyweight ruler Tommy Morrison, the 25-year-old puncher (below) has romped to a 7-0(7) record since turning pro last February. Having had no amateur career whatsoever, the young heavyweight says he is taking things “one step at a time.” Trey does believe, though, that in time he will be as good a fighter as his father was in his 1990’s heyday.

Here Trey – who looks a lot like his father and sounds almost exactly like him – outlines his plans in a Boxing News exclusive:

Trey Lippe Morrison: “It was just last year when I started boxing. I started pretty late. I was all about football; I played at high school and was pretty good. I didn’t want to give up athletics and I thought, my dad was a boxer, so I’ll try my hand at it. I had no amateur career at all in boxing. I’ve had to learn fast. It was tough, early on especially; I felt like a punchbag at times (laughs). It’s no fun being a punchbag, so I had to learn how to move. ”

Q: Aside from your dad, who else inspired or inspires you to be a fighter?

T.L.M: “Well, it’s just my dad all the way, really. He’s the reason why [I’m a fighter]. But now that I’m into it, I do like watching Mike Tyson. I like to try and learn from a fighter’s style and I like Tyson’s head movement.”

Q: Is it fair to say that, if you father was not Tommy Morrison, you wouldn’t have become a boxer yourself?

T.L.M: “I can’t definitely say I wouldn’t have, but my father is a big reason, yes. If he had been a great golfer instead of a great boxer, then yes, I would almost certainly have tried my hand at golf.”

Q: You look to have fast hands and obviously some power, but how would you describe your style? How much like your dad are you in the ring?

T.L.M: “I am quite a bit like my dad. My body is quite similar, how I stand and move. With that I am trying to add the Tyson head movement, to be able to slip punches. So I’m like a combination of my father and Tyson, plus me (laughs) – and I’m still trying to figure it all out. I’m in absolutely no rush at all. I have lots of time on my side and I have no intentions of rushing things at all. I’m taking things one step at a time.”

Q: There are quite a few “boxing juniors” who have tried to follow in some big footsteps. Do you feel added pressure in trying to follow your dad?

T.L.M: “Yeah, but a lot depends on how you take it. I fully understand the comparisons some people will have between me and my father. And I know I am nowhere near as good as he was yet. You know, you have to let a lot of that [expectation/pressure] come in one ear and go out the other. But my dad was great and hopefully I’ll get there one day when it comes to being as good as he was.”

Q: Which of your dad’s great fights do you most enjoy watching?

T.L.M: “I like the Razor Ruddock fight and the George Foreman fight. The Foreman fight was the first time he was technical, having realised he couldn’t just slug with Foreman (laughs). I liked that. And the Ruddock fight, because he was behind on points before he pulled it out with that crazy left hook. That was a great comeback win for him.”

Q: Your dad had that incredible left hook. What is your best/favourite punch?

T.L.M: “I really don’t know which my favourite punch is yet – whichever works (laughs). My left hook is pretty good, not as good as my dad’s yet, but hopefully it’ll get there one day.”

Q: You are now working with accomplished trainer Jesse Reid. Do you plan on making this a long-time relationship?

T.L.M: “Yeah, for the rest of my career I hope. I’ve been with him for two weeks now and he’s already taught me a lot. We’ve really clicked, I like him a lot. The things he’s teaching me, now I have to put it all together in the ring.”

Q: You have six first-round KO’s and a second round KO. Are you looking forward to the first fight where you will be tested?

T.L.M: “I am. In fact, the last two guys I fought, they were fully expected to do that, to take me rounds. They were picked because of the fact that they had never been KO’d (these two fighters being: Richard Dawson, who had lost two of eight, both losses via decision; one of them to British cricket star Freddie Flintoff and three-fight pro Charles Hackman, who had also never been halted). And I was surprised myself I got such quick wins. But I guess I got lucky and what happened happened. I know [in time] I’ll meet guys who never go down. I’ll get those tough fights.”

Q: Are you expecting, because of the big last name that you have, that lots of promoters may well try and sign you up?

T.L.M: “I’ve been warned about things like that already. All I know is I will stay with my current promoter, Tony Holden, who was my dad’s promoter.”

Q: And how big are you physically, to be able to combat the huge, huge heavyweights of today?

Q: And although you have plenty of time on your side and you are taking things slow as you said, it is your goal to one day become heavyweight champ?

T.L.M: “Yes sir. I’m looking forward to each fight along the way.”

Trey is next scheduled to box a six-rounder in Oklahoma on May 30th, against TBA.