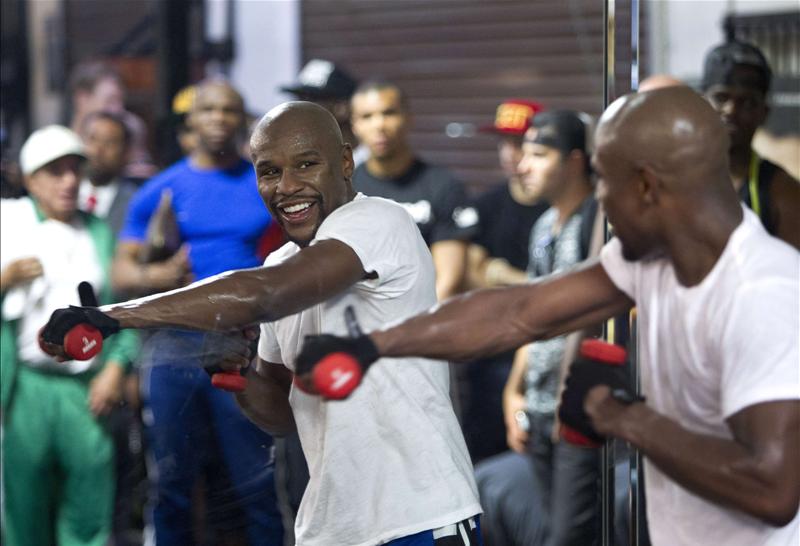 A LOT of people don’t believe me, but I started to teach Floyd how to box when he was still only nine months old – he couldn’t even walk but he was throwing punches in his bed – and now he’s preparing for the biggest fight in history against Manny Pacquiao on May 2. I’m a proud father.

I’d show him punches – hooks, right hands, uppercuts – and believe me, one day I came in the room, looked at him and he was throwing punches just like that, like I was teaching him.

He’s been in the gym all his life. Before he could even walk I used to push Floyd to the gym in a stroller; we used to be right around the corner.

I never thought he’d be involved in a fight of this magnitude  – don’t get me wrong, I always thought he’d be a champion – but I never could have imagined this. I feel my son’s going to win but if I thought he was going to lose it would still be a great honour to be involved. Even though Manny Pacquiao’s gonna get a whooping it should be an honour to him too.

Had I not started my son he wouldn’t be boxing today – I’m the daddy, I played the biggest role. Floyd is my baby, I put my all into him, and my dedication to him is why he became champion. I inspired him to go to the gym, to run, to train. Floyd had his first amateur fight at 10 years old. You’d have been amazed if you’d seen him, how he was rolling his shoulders and countering. He never took punishment – that’s why he’s still going today.

Me and my son talk about things. When you’re a trainer and a father, it’s been a hard and long journey. Even Floyd coming up as a kid – ‘I don’t wanna run, I don’t wanna run in those boots, I don’t want this and that.’ And I’d say ‘Get your boots, and run. You’re gonna put your boots on, or you’re not gonna fight’. That was one of the hardest periods for us.

There’s a lot of people who don’t like Floyd – not that he did nothing to nobody – it’s just that some people want to see him get whooped. A lot of people didn’t like Muhammad Ali. My son don’t talk as much as Ali but he takes care of his business and some people think that makes him bad.

We’ve had a couple of altercations but, hey, God pulled us back together some kind of way. I was in prison, and then I came out and trained him to win his first world title in 1998, the WBC super-featherweight title, against Genaro Hernandez. Whatever it was, we came back together and we’re doing what the Mayweathers are supposed to do – taking care of business.