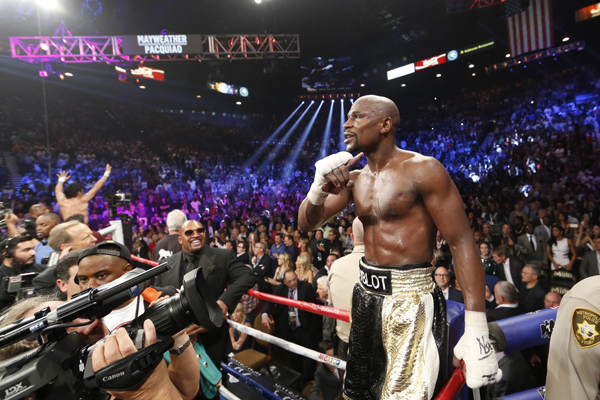 WITH his victory over Manny Pacquiao, Floyd Mayweather has accomplished everything he set out to do. But he has one final fight left on his current television deal. “He’s been saying one more but whether it’s one or two or none I think he sees the finish line,” said Stephen Espinoza, the executive vice president and general manager of sports programming at Showtime.

The last Mayweather fight is expected in September and Espinoza says, “One thing that Floyd’s been set on doing, and he made this clear since he came to Showtime, is he wanted to make each event unique and different and special. I think he’s chosen pretty entertaining opponents in each one. I wouldn’t say that it’s inconceivable that he comes up with a stunt to make the next one really, really interesting as well. We can’t continue to break the pay-per-view record with each alternating fight. I think he’ll make the next one very interesting. I think he’ll go out of his way to do so.”

The television executive is not convinced a rematch with Pacquiao could be made for Mayweather. “There have been a lot of challenges. There’s a lot of history between the principles here, history of negotiations, a relationship that went sour between Floyd and Top Rank, a lot of emotional baggage and that the made the negotiation part difficult and getting the fight together difficult and then you layer on to it two different competing networks, different business models, different strategies, different philosophies, different creative viewpoints sometimes, so you’re bringing in three sets of different viewpoints, promoter, fighter and network and trying to layer them all together and it’s a challenge,” Espinoza said. “On the one hand there’s a template that’s in place that is immediately applicable. We had a template from Lewis-Tyson but a lot of it didn’t apply because of changes in a range of things. But at the same time a lot the areas of conflict are still fresh in people’s minds. [With] the time between Tyson and this event, a lot of that faded. It’s a bit of a square peg in a round hole sometimes this sort of structure. Everyone’s doing it, doing it happily for the scale of the event. I just don’t know that everyone would jump back into it right away again.”

He was however confident they were “on track for a record-breaker”.

The network, and the rest of us, will have to face life without Floyd and contemplate who will follow Mayweather to become the sport’s next major superstar. “It’s sort of a cyclical process within the sport of boxing. When [Oscar] De La Hoya retired people asked what’s going to happen now that De La Hoya’s gone, and before him there were others. My philosophy has always been that the void will get filled. We don’t always know who it’s going to be. I’m not sure that at the point Oscar retired we even foresaw that Floyd was going to become as big as he has. But there’s always someone. I think what our strategy has been is to develop as deep and as broad a class of young talent as we can and let the chips fall where they may. Whether it’s Keith Thurman or Danny Garcia or Deontay Wilder, whether it’s one of the young guys like Errol Spence or the Charlos, I don’t know which one, from those group of guys at least one is going to hit and go there,” Espinoza continued. “To develop and maintain the deepest pool of young talent, that’s really the second prong of our philosophy. One is obviously to feature the top, pound-for-pound fighter in the sport, second is to have him backed by a class of young, deep talent in the most popular division, 147 plus or minus and then let the random chance of the sport take hold and see where it goes.

“There’s no shortage of talent. I just couldn’t tell you who’s going to be the one to breakthrough.”

As well as boxing ability, there are other elements that go into the creation of a sporting star. “It has a lot to do with their fighting style and their personal charisma. But there are other factors and sometimes unpredictable, sometimes cultural, societal factors. If we look at the three biggest stars of the last generations recently, you look at Mike Tyson, Oscar De La Hoya, Floyd Mayweather. Look at Mike, his rise in popularity coincided with hip hop music, he sort of embraced that culture and really brought the music into the sport of boxing even more. De La Hoya’s rise coincided with the rise of the Hispanic population in the US, as that population matured and their economic power [grew], they threw their money behind him and he became a real force. Floyd has matured along with social media. He is really, I’d argue, the athlete who has taken advantage of and benefited most from social medal, the way he’s done it, the timing of it has really been fortuitous for him. That was one of his natural gifts and it was at a point when that media was exploding. Sometimes there’s a little bit of random chance in it and what are the societal, cultural factors going on at the time.”

The Showtime boss however doesn’t expect the instant appearance of a new pay-per-view star. “We’re in the pay-per-view business because it’s a necessity. Obviously we can’t afford licence fees for fights like this. If we go through a period where the vast majority of our fights are on Showtime as opposed to pay-per-view – that’s not a bad thing. It’s great for the network. It’s good for the sport. We’re used to having pay-per-view stars to carry the sport but it’s not a necessity. There are actually a lot of benefits to not having it for a while and cultivating the audience and letting it re-energize on basic cable and pay cable,” Espinoza said.

He does not see the rise of Premier Boxing Champions on free-to-air television in the United States necessarily as a threat. “It’s a positive development for Showtime. If there are boxers that we believe in, let’s take Danny Garcia or Keith Thurman or Leo Santa Cruz or Deontay, pay TV was the main tool by which those fighters got developed, just by virtue of the nature of the US television market. There weren’t a lot of outlets that provided meaningful paydays. When a fighter gets to a point it almost becomes an obligation of the network to continue to support him, big fight, medium fight, small fight, because there’s not a lot of outlets. Now there are other outlets and there are other outlets that are paying decent money. So there’s the ability for those fighters to go get the broader exposure of the network and maybe not necessarily as high level an opponent as required for premium TV. It frees us up to get back to what we’re supposed to be doing, which is premium level events. It restores the natural order of free tv, cable, premium TV back to the way it was before,” he argued. “The fact that Mayweather developed into a pay-per-view star is a bit of an anomaly itself because it’s very difficult to develop a pay-per-view star, an economic force when you’re marketing only to the 25% of your audience that has pay television. Whether it’s our 23 million or HBO’s 29 million that’s still roughly 25% of the US television [audience]. What you really need to develop a star in most cases is exposure to a broad fan base, like De La Hoya had through the Olympics. Floyd was able to find a work around essentially by developing his fanbase on social media but ultimately having CBS or NBC in boxing with 100 million households, potentially huge audiences, it’s a real boon for the possibility of a pay-per-view. That will speed the process.”

He believes the interest generated by the Mayweather-Pacquiao fight will benefit the channel too, saying, “If we do this correctly we can ride the tailwind of this going forward. It’s not going to change anything overnight. If we have a larger audience than usual, which we know we will, and we do a good job of entertaining that audience then there’s a good chance the next boxing event that comes along, at least the audience’s interest will be peaked. The task of continuing to build the sport starts after this event.”