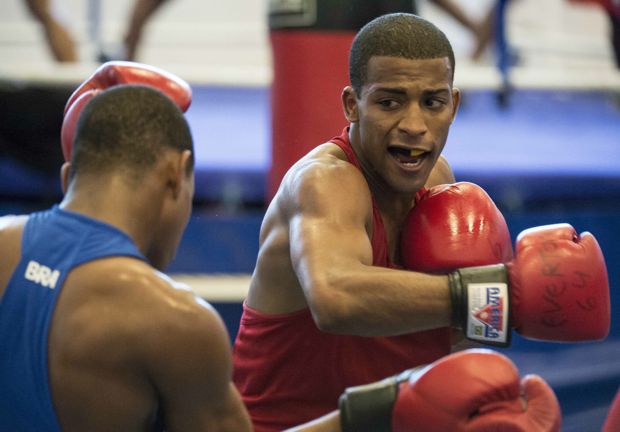 GIFTED Brazilian Everton Lopes has many an amateur achievement to his name – 2011 World Amateur champion, silver medal winner at the 2007 Pan American games and Everton being a two-time Olympian – but the 26-year-old says he feels he will eclipse his amateur glory with pro achievements.

Set for his pro debut in Indio, California on February 27th, the Golden Boy/Sheer Sports signup is sure he will make the transition to the pro game with no real problem.

As translated by his trainer, Manny Robles – who has worked with notable names such as Reggie Johnson and Israel Vazquez to name just two world class fighters – Lopes spoke to Boxing News:

Q: When did you first put the gloves on?

Everton Lopes: “I was 15-years-old. I came to boxing quite late. A friend of mine, who was already on the national team in Brazil, he took me to the gym and I just fell in love with the sport.”

Q: For those fans who have not yet seen you fight, how would you describe your style?

E.L: “I would say I’m a boxer-puncher. I can box when I need to and I can fight when I need to. After my level of amateur experience and all my fights, I am very diverse. I’m very smooth, in fact my team call me Sweet Pea, after the great Pernell Whitaker. I’m quite a puncher but I can also move like Sweetpea!”

Q: Who, aside from Whitaker, are you favourite boxers to watch and to learn from?

E.L: “Floyd Mayweather and [Guillermo] Rigondeaux. Those two I really like. I can box like they can, too. I’m a southpaw but I can definitely box like all of those guys.”

Q: You have won so many trophies and titles as an amateur. Which means the most to you?

E.L: “Definitely the 2011 win when I became world champion; winning the gold medal.”

Q: Do you have any concerns or nerves about moving into the pro game?

E.L: “No, none at all. Thank God, I have no nerves at all. After all my amateur experience – and I had over 250 fights – I’m ready to make the transition. I feel good and my trainer feels good. (Manny Robles jumps in: “We are in the best place in the world for boxing: Southern California. We are in the right place. Everton has seen it all as an amateur. We have great people around us at Sheer and Golden Boy, and that’s what makes great things happen; great people.”)

E.L: “Definitely. I boxed at 141lbs in the [amateur] world championships, and I will come down to 135 as a pro. I will look to win world titles there and then maybe move up to 140 and maybe even 147. But first things first!”

Q: Many great amateurs are moved very fast when they go pro – such as Vasyl Lomachenko and Rigondueax, who you spoke about before. Will you be moved that fast perhaps?

Manny Robles answering: “Absolutely. Why not? Everton has all that amateur experience, he has that on his side, and at age 26, he is already a man. His pro debut will be a six-rounder, so we’re already skipping four-rounders. I honestly believe he can be a world champion in two years. We’ll box in California and maybe in Brazil – Golden Boy have already had a show in Brazil, so we’ll see. We’re looking at putting on some great performances.”

Q: Recently, Acelino Freitas was a great and exciting fighter from Brazil. Is he a hero of yours, Everton?

E.L: “He was a good champion and he represented Brazil very well. Actually, we come from the same city, the same home town. Right now Terence Crawford is the best in the world at lightweight. I want to box guys of that calibre very soon.”

GET INVOLVED WITH BOXING NEWS, your loyal companion since 1909