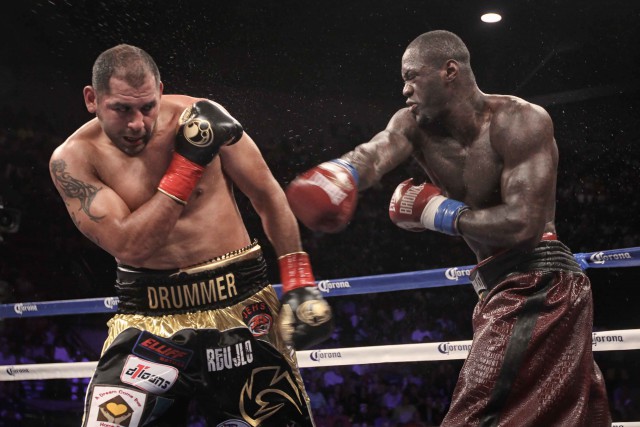 But Molina, who has picked up a win since his brave, better than most expected June 2015 challenge of Deontay Wilder, says he will be the fighter who earns another title shot with a win in April. Molina is both bigger and younger than Adamek and the Mexican-American says he is hugely excited and motivated for this, the second-biggest fight of his career.

Q: This is an intriguing fight, when did it first come about for you?

Eric Molina: “It was first mentioned to me four weeks ago, it was just a question: would I like to fight Adamek. I’m interested in making big and exciting fights, if that means having to travel. This is my first fight outside of the U.S and I’m excited. I’m going to Poland, there are a lot of fans there and this will be an exciting fight.”

Q: One thing that has to be asked is, are you concerned about your chances of getting a fair shake over there, where he is a huge star in his homeland?

E.M: “I thought about that, but you can get a bad decision here… But I’m going there with the mentality that I will take the fight out of the hands of the judges; take them out of the picture. The thing is, Adamek has to make a statement in this fight, he wants to get another shot at a world title, he wants to become the first ever Polish heavyweight champion. But to do that [make a statement] he has to knock me out. If he wins a 12-round decision over me, it means nothing. And I know the power I possess. I know I can make this fight not about the judges.”

Q: Adamek has been stopped only once, by the huge Vitali Klitschko. Talking of statements, you will be making one if you flatten Adamek.

E.M: “Definitely. That would be a big statement for me, yes. My intention is to beat him so bad, the judges won’t be able to help him. I don’t have to knock him out. If I knock him down and they give him 20-seconds [to get up] I’ll knock him down again. I will beat him so bad there is no way they can give it to him. It’s not personal, I don’t know the guy, but he’s in my way. I’m at a crossroads in my career and that’s my mentality. If I lose this fight, I become a journeyman. But if I win, I will get a shot at the world title again, a second shot, and I will become the first ever Mexican heavyweight world champion.”

Q: Are you wondering what Adamek has left at age 39?

E.M: “No, not at all! He beats me, he gets a shot at one of these new, young heavyweight champions. So I know he’ll be coming with everything he has. I think he struggled with motivation [in the past] but now he has to show he’s back.”

Q: You have won one fight since the loss you suffered to Wilder in an exciting and competitive battle. Do you feel any ill effects from that fight?

E.M: “My confidence is through the roof! I took his best shots and I got up, I kept getting up. I was still on my feet at the end. I want the world to know this: special fighters learn from their losses and improve and move forward. I am that fighter. Like I’ve said before, my ankle, it rolled underneath me in the Wilder fight, and I went another five-rounds after that, even winning a couple of those rounds. Things that went wrong in my training camp, I’ve put right and my confidence is right up there now.”

Q: Is it fair to say that this fight with Adamek is the second biggest fight of your career?

E.M: “Definitely, yes. This is the type of fight where he will not give up, and me, I will never give up. This is a fight where the two of us can get hurt at any time. Like I told the media before the Wilder fight, I said, don’t be surprised if I hurt this guy – and I did hurt him. I know I can hurt any heavyweight in the world.”

Q: Do you feel you are looked at as the underdog in this fight?

E.M: “When you look at all the factors, like the fight being in his country, yes. But I’ve been the underdog my whole career. That role doesn’t bother me at all, I embrace it, it motivates me. But the thing is, the Alabama fight (against Wilder) was like in a different country anyway. And I tell you this – when I win this fight, it will not be an upset. I will win. Then I want to come to the UK and fight the best over there. My next fight will be in the UK. I want to fight all over the world.”