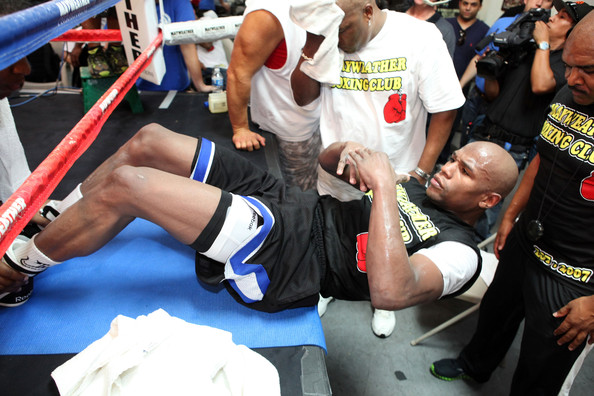 Work so hard that your idols become your rivals. That statement is so true.

I’m surrounded by great fighters I watched as a teenager. Admiring them. Wishing that one day I’d be with them. Fighting on the big stage.

Now I’m surrounded by great fighters. Some of my favourites. Fighters I respect. Floyd Mayweather, Roy Jones, Jean Pascal, Cornelius Boza Edwards and Zab Judah are just some I’m surrounded by on a week to week basis in Las Vegas. Born in London. Made in New York but Las Vegas took me in as one of its own.

I started my morning at 6am with a nine-mile run. Early afternoon I sparred a young prospect. We sparred last camp. He’s very good. He gave me all the problems that will help me get victory on April 30th. We completed eight rounds of sparring. Intensive stuff!

Afterwards I went to do my last medical at the blood doctor. I’m ready to go for my fight now.

Ishe Smith got his opponent today as well. He’s been training in the gym. British trainer Lee Beard is his trainer. His record is 21-1. He sparred with Badou Jack a few times and prospect Kevin Newman.

Floyd sparred today. Everything is coming together for the whole team. There’s 23 days left. Time is flying and the fight is closing in.

The biggest fight in boxing history is getting closer each week.

Afterwards in the locker room the team just chilled with Floyd as he advised us fighters. To have the pound-for-pound king take time out of his hectic schedule is always a special and appreciated feeling.

I woke up this morning at the lowest I’ve been so far in this camp. That’s a good sign. My body is getting in top condition.

I completed 12 rounds sparring with two boxers. Six six-minute rounds. I’m in great shape. It’s all about going into my fight in the best possible condition and putting on a performance to claim my 38th victory.

I’ve started cryotherapy. I’ll be using it for the next three weeks. It is supposed to boost energy levels, reduce soreness, reduction in fatigue and enhance performance.

We’ll see how this goes.

I put in four hours training today. Seven-mile run, strength conditioning and boxing. It was hard but I pushed through it.

Floyd came in and bettered me. He sparred, hit pads, bag work, strength work, abdominals, jumped rope and hit speed bag. Three hours strong! The gym was hot. Spectators where dripping of sweat just watching the pound for pound king go through his work out. A Floyd Mayweather workout is an event in it self.

The legendary referee Richard Steele came into the gym today to watch Floyd spar. Always a honour to see the man.

445am was rise and grind time. Six miles up Mount Charleston. It was painful from start to finish but it’s this work that powers you for a hard fought battle.

I Finished my day with a cryotherapy session at Sub zero recovery and settled in to watch the Premier boxing champions on NBC.

Andy Lee showed grit to come back and claim a draw against Peter Qullin after getting dropped twice in the early rounds.

Lamont Peterson put on a great performance against Danny Garcia.  Out-boxing him then closing the show in style. I had him winning by eight rounds to four unfortunately the judges didn’t agree. That’s three fights I believe Danny has lost now. Against Herreria, Peterson and me. He’s lucky to still be officially undefeated.

The week is over. I always enjoy Sunday as Monday we are back at it.

Monday’s have always been my favourite day of the week. I try to start my week as I mean to go on.

Yoga and a massage topped off with a trip to the movie theatre was all that was on the agenda today.

READ PART ONE of THEOPHANE’S DIARY