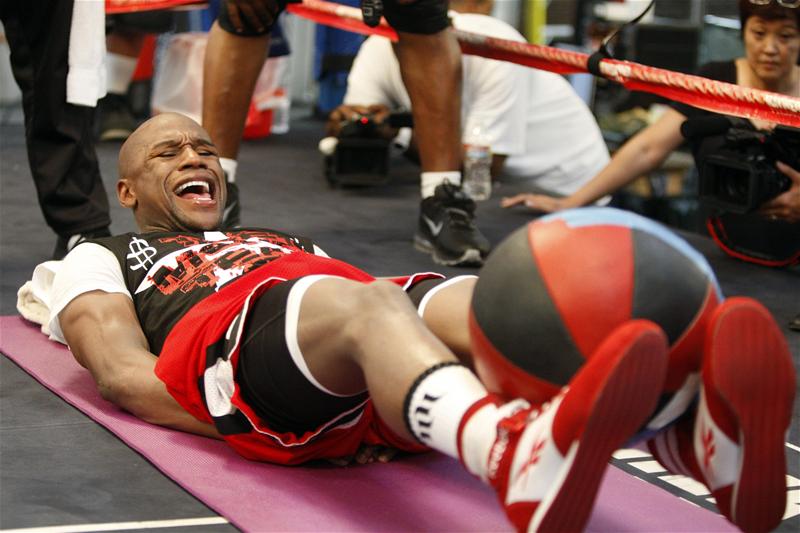 He has dedicated his life to the sport, to getting better, fitter, breaking limits and testing himself to the max. Chasing a world title shot, Theophane is currently part of Floyd Mayweather’s ‘Money Team’, training with them every day, and watching Floyd prepare for his May 2 showdown with Manny Pacquiao.

I love to start my Mondays off as I mean to go on. Ever since I turned professional back in 2003 I’ve began my Monday with a long run.

Working hard is the core of everything. Whatever you do. Business. Sports. Entertainment. Hard work is always the thing that separates the best from the rest.

I had a good day in the gym with Nate and finished off with a strength conditioning session at 24 hour fitness.

Today was media day. The gym was packed like never before. Tents outside for interviews. Journalists and  celebrities were in attendance. There was not a place to move. Everybody was trying to get footage of Floyd Mayweather working out. Like him or not he is a superstar. Getting paid 200 million dollars for 36 minutes of work.

I completed six 6 minute rounds of sparring with two fighters. Everyone said how good I looked. My team told me to take the day off tomorrow.

CNN reporter Ben Wyatt interviewed me and watched my training session. He was surprised by the work I put him. I told him this is nothing compared to Floyd.

I went for a run this morning then headed off to Lake Las Vegas spa for the day with a friend. I got a massage and relaxed poolside soaking up the sun.

Back to work today. After the day off I was refreshed. I put in just under five hours training. Morning run, boxing workout and strength conditioning session.

Floyd has been working hard as usual. With 15 days left until the biggest fight ever, it’s a pleasure to watch these historic workout sessions.

I went hiking today up Red Rock Canyon. Beautiful scenery all around me.

This has been a great training camp. Every camp is hard and draining but this has been one of my favourites. Today wasn’t a day off. I put in four hours of work.

Floyd Mayweathers charity foundation had a 5k run and 2k charity walk. There was games and events for kids. They all seemed to enjoy their selves and it was for a good cause.

The last week of hard work is in front of me. I’ve got a big fight in front of me. Montes is a young hungry fighter. 30 wins. 21 by knock out. 4 losses. I watched his loses to Humberto Soto and Eric Bone. He comes to fight and rarely takes a backward step.

Floyd was very impressed with my last performance. That got me back on TV in a meaningful fight. As long as I produce the same performance as my last fight I’ll get my victory. Over the last year I’ve been producing better results. Winning 22 rounds out of 22 from two of the ringside judges over three fights. I need this win. I’ve trained for this win. Victory 38 coming up.