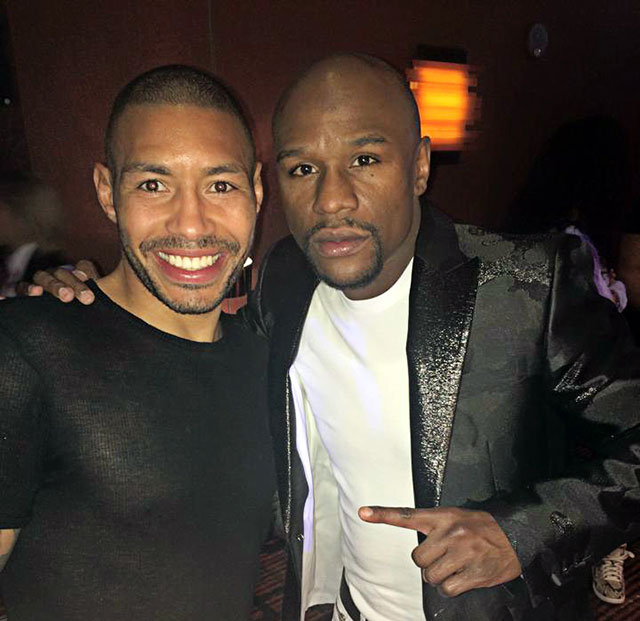 He has dedicated his life to the sport, to getting better, fitter, breaking limits and testing himself to the max. Chasing a world title shot, Theophane is currently part of Floyd Mayweather’s ‘Money Team’, training with them every day, and watching Floyd prepare for his May 2 showdown with Manny Pacquiao.

It’s a new week in Las Vegas. I’m one month away from my 45th professional fight. I’m working so hard to claim my 38th victory. I’m on a four-fight win streak with Mayweather promotions. My last fight was so good I was promised a world title shot. First up I have to get a win on April 30th at the Palms Casino Resort.

Floyd Mayweather sparred this afternoon with two of his sparring partners.

Watching this camp is special. The biggest fight in the history of boxing. A fight worth 400 million dollars. A fight breaking all records. I get to witness behind the scenes and private moments of this camp. I’m the one and only official member from Britain representing Mayweather Promotions. I’ve been boxing for 27 years and been a professional for 12 years. It’s been a long hard journey. The hard work and sacrifice has been worthwhile.

Today is April Fools Day so no one was trusted. The work was the only thing that was to be believed in.

I sparred with DeMarcus Corley this afternoon. I wasn’t happy with my performance but everyone watching thought I put in a controlled performance. There was things I know I could have done, and I didn’t. I am too strong for Chop Chop though. He had some good moments but I’m an altogether better fighter.

During Floyd’s workout he looked at me and joked “Ashley, you’re going to be my final fight.” Floyd’s photographer Pete said “You’ll take that Ash. A cool two million.”

I sit back and watch Floyd workout as it’s motivating and inspiring to me. Seeing how hard he works pushes me to work hard and push myself. The young fighters on the team Kevin Newman and LaDarius Miller have said I’m the hardest worker in the gym. I hear this often by onlookers. It’s a nice compliment but it’s all about doing it fight time. Training hard means nothing if your results in the ring don’t showcase the work you put in.

My last four fights I’ve been getting better and better so come April 30th I expect an even better performance than December 12th.

DeJuan Blake called me this morning. Today marks four weeks until my 45th fight. I gave a list of 10 opponents to Dejuan and he’s come back with the toughest one on the list. Mexican fighter Mohonri Montes who has 30 wins, 4 losses and 1 draw. He’s an experienced fighter for 25 years old. He’s gone 12 rounds with three weight world champion Humberto Soto who I’m also targeting. He gave him a very good fight. Eric Bone also beat him over ten rounds.

DeJuan asked me if I’m sure I can beat him. I told him yes I want my world title shot.

I watched my opponent’s fight with Eric Bone later that night after training. Eric outboxed him. I believe I can do the same thing. I just need to keep training like I have been doing.

Corley and I went out it again.

I completed four-six minute rounds with ‘Chop Chop’. His nose was busted up from round one. He was wearing a white shirt. By the end of the 24-minute session his shirt was now red. I put in a good performance today.

Some days you have good days. Some days are bad. Today was a good day.

4.45am I was up and ready to hit the mountains for our weekly altitude run. It was only Ishe and I along with my right hand man in Las Vegas Dan Wettlauther.

I’m fully focused on my fight on April 30th. Floyd has already told me he’s going to get me a title shot. It’s just up to me to get my 38th victory in three weeks time.

Easter Sunday is today and I had the pleasure of spending it at Floyd’s mothers house. Being away from my family for long periods of time is hard so it’s nice that I’m treated like family in Las Vegas by some good people. A nice end to a hard week of work.