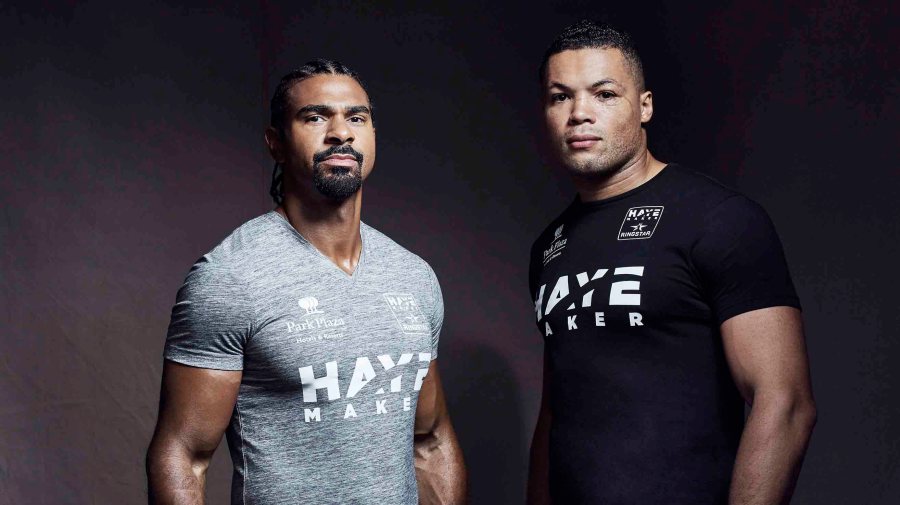 DAVID HAYE and Richard Schaefer – the dream team behind the Hayemaker and Ringstar promotional collaboration that today announced a series of new signings – believe their flagship star, Olympic silver medallist Joe Joyce, could be challenging for the world heavyweight title within two years.

Bullish and strong, Joyce’s vast amateur experience coupled with his numerous WSB adventures put him in a position to bypass the usual early diet of pushovers.

“We’re talking about an eight or 10-rounder in his first fight,” Haye told Boxing News. “He’s got it in the tank. I’ve seen it against world class professionals, undefeated professionals who are ranked very, very highly in the world. Behind closed doors he’s given a very good account of himself and I’m certain when the lights come on he will flourish. He’s a big name fighter, and he showed that at the Olympics when he was beaten to the gold by a controversial decision.

“If you look at the London Olympics [in 2012], Anthony Joshua got the gold and you can see how his career has gone within four or five years – he’s considered the premier heavyweight on the planet. I believe we can do that in half the time with Joe Joyce.”

Schaefer went one step further than his business partner, adding: “When you look at Anthony Joshua in the London Olympics he was much less experienced than Joe Joyce is now so I actually believe, and I mentioned this to Joe last night, if you look at the Top 15 ranked heavyweights [in the world] there’s really only two who I wouldn’t want to put him in with right away.

“Other than that, I’d really be happy to put him in with anyone. After five or six fights, he can fight for the world title.”

Joyce, at 31 years old, is at an advanced age to be ditching the vest but his signature was much sought after among leading promoters, and his decision to join up with Haye and Schaefer should be viewed as a huge coup for the fledgling promotional partnership. Hayemaker and Ringstar will showcase their talent on free-to-air channel Dave – part of the UKTV group – which broadcast Haye’s 2016 comeback to millions of viewers.

“Myself and Richard sat down with Joe and talked about our history in the sport, our experience and where we believe he belongs, and the route we’ll use to navigate him to the top,” said Haye. “He obviously liked what he heard. It wasn’t a cheap signing either, but you get what you pay for in this game. We believe he will win titles, and not only that, he will go on to unify the division. I really truly believe that. I’m so glad that he understood our vision, that we will put him on terrestrial television [Dave] to build his brand and become one of the biggest household names in Britain, and the world.”

When Schaefer first announced his UK invasion last year, he revealed he was in talks with several broadcasters but ultimately, it was UKTV’s vision and enthusiasm which persuaded the former Golden Boy promoter and Haye to get involved.

“We had a round of meetings,” Schaefer explained. “We came to London and in less than a week we spoke to many stations who had expressed an interest to work with us. Some were more advanced discussions than with others, but there was a lot of interest. The ones that showed the most enthusiasm was UKTV. They were like, ‘Let’s do it!’ at the first meeting.”

“They [UKTV] realise the value that boxing brings,” Haye continued. “They’re focused on 16-to-35-year-olds. They’re showing MMA tournaments every other month and they want to do a similar sort of thing with boxing. They realise that young men want to see competitive fights, whether it’s in an octagon or a boxing ring, and they want stars to follow.

Schaefer indicated the TV platform will allow their stable of fighters to grow.

“To do a long term deal with us shows there’s a statement of intent from them,” he said. “We [already] have fighters who have different storylines, but the important thing for us is quality. Will we sign another seven or eight fighters in the next 12 months? Probably, but they must all have that quality.”

Haye plans to continue his own boxing career, and expects to be back in the ring before the end of the year despite the Achilles injury he suffered during his March defeat to Tony Bellew. But it remains to be seen if he will join the likes of Joyce on a UKTV broadcast.

“That’s another discussion that we’re talking to UKTV about at the moment,” Haye said with a wry smile. “They saw the record breaking numbers that I produced before. Keep your ears open because we should know more about my future plans in the next month to six weeks.”