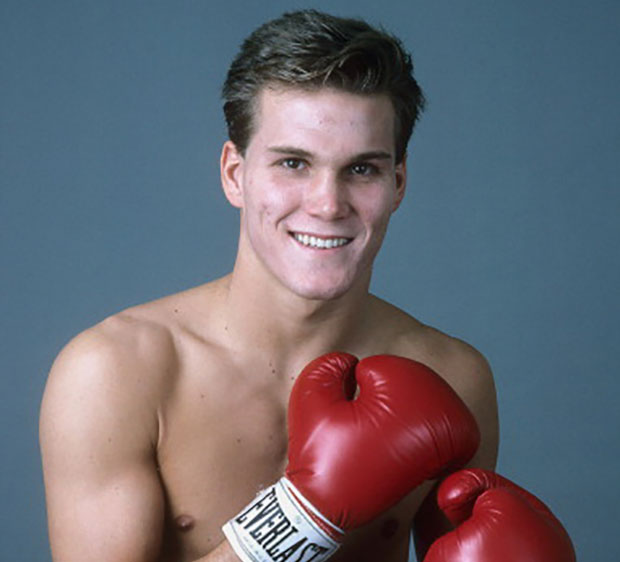 KNOWN as “Schoolboy” during his peak fighting years due to how young he was – and looked – Darrin Van Horn seemed set for superstardom. Winning the IBF light-middleweight title at the age of just 20, the Lexington, Kentucky man appeared on magazine front covers such as Ring and KO and the future looked great.

A second title was claimed up at super-middleweight, but Van Horn suffered a heavy defeat at the hands of a rampaging Iran Barkley; sadly the fight he is remembered for in many quarters. But Van Horn, today aged 46 and sounding in fine physical and mental shape, has some story to tell.

Here the former champ who retired with a fine 53-3(29) ledger in 1994 speaks exclusively to Boxing News:

Darrin Van Horn: “Yeah, I was thinking how time goes by so darn fast; it’s twenty six years since I was a world champion! No, I was actually 16 when I went pro. In the state of Louisiana you can turn pro at 16.”

Q: And you dad was your trainer and manager?

You fought at a very active pace, with five fights in your first year as a pro, and then you had 15 fights in 1985. Did you enjoy being so active?

D.V.H: “Well, if they had been long fights, it might have proven more difficult. But A lot of those fights were just four-rounders and of course if I got a KO, the fight was over with even quicker. And as an amateur you try and fight every weekend and that’s what it was like for me at that time. My competition at that time was not the strongest in the world – I wasn’t fighting King Kong or any of his relatives. But it was great experience for me. And I was a 16-year-old kid, fighting men. They were like 5-5 or 10-10 [record] fighters, but they were men and they had that man strength. They weren’t the most skilled of fighters, but they were tough brawlers. A lot of my fights, afterwards I was black and blue. My face would swell right up. ”

Q: And you sparred a lot of good fighters at that time also?

D.V.H: “Yes, there were a lot of great fighters in New Orleans and in Lafayette, where we had to drive for two hours to train – we were living in a small place outside New Orleans. I sparred a lot of really good fighters: Kenny Vice, John Duplessis, Melvin Paul. And at the time, being just 16, I didn’t have a whole lot of say in what I did (laughs). My dad was in charge and he’d tell me who, when and where I was training and sparring. My dad had me do a lot of running, that’s where your conditioning comes from. I train kids today at the local gym, and I tell them all the time that they have to put the hard work in, that if they work as hard as they can, they will become the type of fighter people talk about, as having so much gas in the tank and the ability to fight hard. You will eventually meet someone who is more skilful than you, so you have to have the gas to be able to get that fight inside you. ”

Q: You speak very clearly, which is not the case with too many fighters who had a lot of fights, as you had with over 50 pro outings.

D.V.H: “I’ve always been conscious of doing my best to talk well in interviews. A lot of fighters, maybe they became fighters just to earn a living, and they don’t come across as too intelligent. A lot of times you hear the brain damage. I always said I wouldn’t end up talking like I had marbles in my mouth. But I graduated college, so with that, people have the perception that you must be halfway intelligent to start with. I guess I’m not the typical boxer in that regard. But I’ve always worked on coming across as sounding at least halfway intelligent and being a good speaker. I got my degree and now I’m taking a class, working on getting my masters degree.”

Q: You won the IBF light-middleweight title by defeating Robert Hines in 1989.

D.V.H: “The Robert Hines fight was tough but I won clearly. It could’ve been a lot tougher, if I’d just banged with him like I did with my earlier opponents. But I boxed and stayed on my toes. I was in great shape and on the top of my game. We worked in camp on how to beat him. So the fight wasn’t really that hard.”

Q: You then met your bogeyman, I guess you could say, in Gianfranco Rosi, who out-pointed you twice?

D.V.H: “Yes, well, I suppose that really sums it up [him being my bogeyman]. I’d have bet my entire life that I would beat him! In the very first round, with his very first punch, he knocked me down. He caught me with a perfect shot. I heard the first bell to start the fight, but I didn’t hear another bell the entire day. I was totally out. I don’t remember anything about that fight at all. That fight went out on ABC Wide World of Sports in the afternoon, and after the fight I went to a café, and I was wondering where all the people were who were going to watch the fight. I had no memory that I’d fought already. My dad tapped me on the shoulder and it was only then that I came to! I watched the fight a couple of days later and I was like, “wow!” I had no memory of the entire 12-rounds. I was on autopilot the whole way through. So then, I was so desperate to fight the guy again. I was saying I was gonna kill him. To have gone all 12-rounds just on auto-pilot, I badly wanted to get him again.”

Q: And you went to Italy for the return?

D.V.H: “Yeah, a year had passed and by now I was walking around at 172-pounds. Back at the time of the first fight, I was walking around at 156 or 157. The limit is 154 of course, and to have sweated down from 172 was so hard. I was much bigger by this time, at age 21. I had no fat on me, so losing weight was tough. And it was so hot in that auditorium in Italy. The fight was dead even after seven-rounds, but after that I lost every round. I had him down in the early going, but by the later rounds I was so weak, all my strength had gone.”

Q: But you bounced back and, up at super-middleweight became champion again?

D.V.H: “I looked so terrible against Rosi, my promoter, Cedric Kushner, told me it would be hard getting fights now, that people would think I was just a flash in the bucket so to speak. But Lindell Holmes offered me a fight and I took it of course. He was the best super-middleweight in the world at the time – a super nice guy as well – and he was bigger and stronger than me. But I knocked him out with a body shot. I guess he’d seen me against Rosi and didn’t really take me all that seriously. Maybe he didn’t train as hard as he should have. But I was in great shape and that win vindicated me. I felt much better.”

Q: You had one successful retention?

D.V.H: “Yeah, I fought the number-one contender, John Jarvis and I stopped him in three-rounds. Then I went in with Iran Barkley. I thought that was going to be a really good fight. But I had a messed up hand. My right hand, I had a hairline fracture. The night before the fight was supposed to happen, I was in New York and my dad told me the fight was off, cancelled. So I went to bed, spent some time with my girlfriend and went to sleep at around four or five A.M. Then, I’m woken up, I think by Don King and Carl King, my dad and Kushner, and they tell me the fight’s on. They said I couldn’t not fight, as there was too much money on the line. I was asking how was I going to fight with a fractured hand.

“But the fight ended up happening and it was on pay-per-view and I felt fine. He was throwing left hooks at me, coming at me like crazy, and I couldn’t hold my hand right hand up to my face to block as I would have done, so I pulled back. Everyone knows you don’t pull back from a hook, but my legs felt so gone as I was so exhausted from having next to no sleep, and I couldn’t dip to duck his hooks. He caught and I went down, the referee asked me how I was and I told him I was fine but I had no legs and just couldn’t walk! I got stopped after the third knockdown. I should never have been in the fight.

“But my dad had been telling me it was okay [to fight] and he was saying, ‘nobody can beat us, we can do it.’ It was always ‘we,’ he always said ‘we.’ I should have said, ‘there is no ‘we,’ it’s only me who takes the punches. All ‘we’ do is celebrate after I win.’ Myself, if it was my son with a fractured hand, I wouldn’t have let him fight. I often wonder what reason my dad had for letting the fight go on. I’m not going to say anything or accuse anyone, but I did hear that a lot of money changed hands the day of the fight, which I had nothing to do with. I often wonder if my best interests were being put first. Anyway, I can’t take anything from Barkley, he did what he was supposed to do.”

Q: There was talk of you maybe fighting Nigel Benn shortly after the Barkley loss?

D.V.H: “Yes, I think I was supposed to fight Benn in my next fight after Barkley, or something like that, for around $1million. But Barkley beat me and then he moved up to light-heavyweight and beat Thomas Hearns.”

Q: There was talk that you had failed a brain scan and that is why the Benn fight didn’t happen. Is that true?

D.V.H: “I’m glad you brought that up. I heard that myself but I never failed any scan, not ever. I have no idea where that came from. I fought a few times after the Barkley fight. Rumours and things come up, it’s just ridiculous. I just became disenchanted with the sport. I said to myself I was going to step back for a while and get a few things done; like going back to college, and my intention was to come back to boxing. But I never did. I became a state trooper; there was quite a bit of publicity at the time, what with me being a two-time world champion and now being a member of the state police. But as I got older, I was less and less in the spotlight. But its great to look back and talk about my boxing career, and my achievements.”