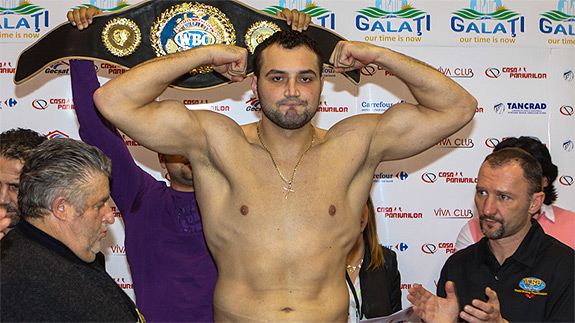 GERMAN-BASED 27-year-old Christian Hammer says he has proven how confident he is ahead of his February 28 clash with Tyson Fury by agreeing to challenge the unbeaten giant “at his place.” The man who captured gold at the Junior World Amateur Championships in 2006, is 17-3 (10) as a pro (included amongst his victories a decision over Kevin Johnson, who Fury also outpointed), and says Fury’s size is no problem as he “likes fighting taller guys.”

The Romanian-born contender will be having his first fight outside of Germany or Romania, yet he says all the pressure is firmly on Fury’s shoulders.

Q: You are on a roll having won your last 10. Do you feel you are at your peak now and capable of scoring a stoppage win over Tyson Fury?

Christian Hammer: “Well, of course I have enough power to stop Fury, otherwise I wouldn’t go into the ring if I didn’t trust myself and my power. I accepted this fight, at his place, I suppose that tells you everything. As for being at my peak, I still have many things to learn, but I feel good and I feel powerful.”

C.H: “The fight with Wach, it came too early in my career. At that time, I didn’t have enough pro experience. But since that fight, I think I have faced fighters who have more power than Wach. All of my fights are important to me. Ahead of all of my fights, I am nervous, which is normal, but in this fight, all the pressure of the public is on his [Fury’s] shoulders, which of course is good for me. ”

Q: You will be able to find suitably tall sparring partners to get ready for the 6’9” Fury?

C.H: “All I can say is, my promoter knows what I will need in the run up to this fight and he will bring me exactly what I need to make sure I am ready.”

Q: Has Fury impressed you or have you seen weaknesses in him?

C.H: “Every boxer has weaknesses. Right now, I’m not going to talk about Fury’s weaknesses. As for his fights, I think one of his very best performances was his first fight with Dereck Chisora.”

Q: You say you feel powerful – which is your best punch?

C.H: “I do feel powerful. We will see on the night which is my best punch!”