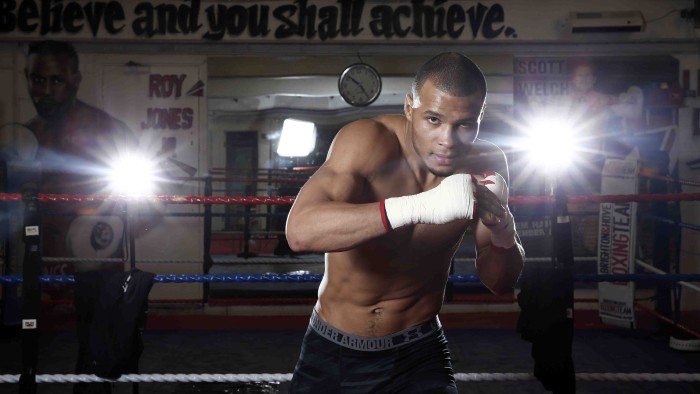 After Abraham, Chris Eubank Jr has an opponent lined up for a spot on the Mayweather-McGregor undercard. He speaks to John Dennen

AN all-British rivalry appeals to Chris Eubank Jr. With James DeGale currently recovering from an operation, he has set his sights on new WBA super-middleweight champion George Groves, who may have broken his jaw but is expected to be back in action later this year.

“I want to make that fight. The public want to see that fight. It’s up to him,” he continued. “I’m sure he wants to keep his belt. If he gets the ring with me, he’s going to lose it. He’s probably biding his time, he’s trying to stall.

“I sparred countless rounds with Groves at the beginning of my career so I know exactly what he is. He’s a solid fighter. I don’t think he’s the same fighter he was after the Froch fights. I think that took a little piece out of him, took something away from him, but he’s still a very capable fighter. I think that both of our styles would make for a great, great fight.”

“I’m fighting bigger fighters than myself, naturally bigger anyway. These guys are coming down from 14, 13 stone but I don’t have to go through the draining process of cutting weight. That’s a pro. These guys are bigger than me but in my opinion boxing’s all about speed. I know I’ve got a chin. I know I can take a shot. I think he’s going to go in there and rely on a knockout. Rely on big punches to try and get me out of there. I’m not worried about that tactic because I know I can take a shot. I know I have a good defence and I know for every one punch that he throws I’m going to be throwing four, five, six shots. So if you look at it from that point of view, he can’t beat me.

“This is the type of fight where I can do whatever I want. I can go with whatever strategy I feel is best in the moment. I can go to war with him and I can outpunch him and I can outbox him. It’s up to me, it’s up to how I feel on the night. What I feel will be the best strategy. I guess you guys are just going to have to wait and see.”

After that his sights are set on a place on the Floyd Mayweather-Conor McGregor undercard on August 26 in Las Vegas. “It’s the biggest fight in the world, possibly ever. Every fighter on the planet’s trying to get on that bill. Obviously I’ve got July 15 but as long as I come away with that with no real injuries then 100% looking to get on that,” Eubank Jr said. “Mayweather has a fighter called J’Leon Love, a super-middleweight. I’m sure they want to get him on that bill.”

When it comes to the August 26 main event, Eubank does not rate McGregor’s chance. “I think he’s way in over his head. I think that it’s going to be very one-sided. But I think it’s going to be a great event, a great spectacle, a great night of boxing. It’s going to be massive. I’ll be there. Maybe it will even top the atmosphere that was created when Mayweather fought Pacquiao, maybe even bigger than that. Crazy to think that was two of the world’s best boxers, this is one of the world’s best boxers against a guy who hasn’t boxed. So it’s kind of surreal,” he said.

“Floyd has done everything he can possibly do at this point. He’s paid his dues. He’s earned the respect of the boxing fraternity. He’s known worldwide for his achievements. He can’t do anymore. So now he fights for money. He’s Money Mayweather, the Money Team. Everybody knows this. So you can’t be offended by him taking the biggest money fight out there for him. He’s paid his dues so I guess he’s earned the right to now make money and making money is what this fight is all about. It’s not a legacy fight, he’s not going to get loads of respect for fighting Conor and people won’t say that was amazing if he beats him, when he beats him. People expect him to win. It’s not about legacy. It’s about money. Same with Conor. I would be surprised if he truly believes that he’s going to beat Floyd. Deep down. Of course, he’s going to say he’s going to go out there and do what he has to do, he’s going to win, he has to say that. But if you really think about it, without having any boxing matches, how could you really believe that you’re going to beat Floyd. When the best boxers in the world haven’t been able to do that. Is he that confident? Is he that egotistical to believe that he can do it? I hope so. I hope he is. Because then maybe he has a chance. I hope he really does believe he can do it, then it’s going to be a better fight. If he goes in there knowing he’s going to lose, then it’s going to be embarrassing. Every fighter needs that belief going into a fight. For it to have any chance of being a good fight they have to believe they can win.”

Chris Eubank Senior however believes that has the key for how  Conor McGregor can defeat Floyd Mayweather. Watch our video interview here: