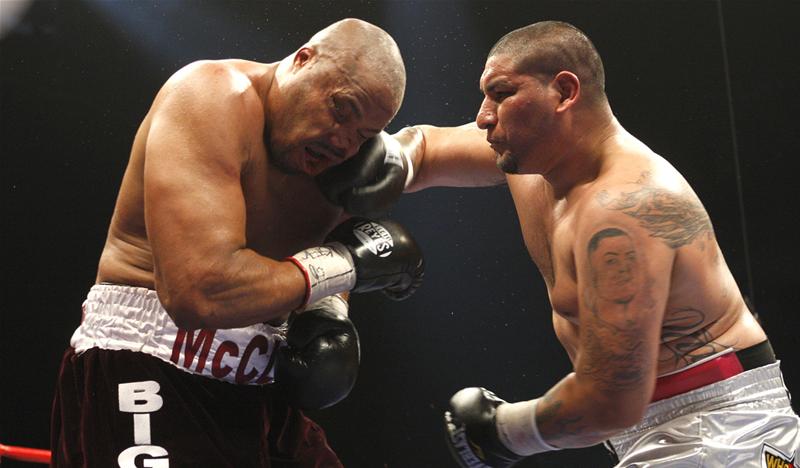 Here, the Mexican/American explains how he will attempt to put two losses to Bermane Stiverne behind him:

Q: Who will you be fighting on March 13 and do you want rounds or an “I’m back” sort of statement by way of a quick KO?

Chris Arreola: “I have no idea, man, but it doesn’t matter, I just want to get in the ring and fight (according to BoxRec, Arreola will face the 12-3(8) Curtis Harper). I’m ready to put rounds in but I always want to knock somebody out. I hate decisions. I’ve just gotta take care of business and then keep it going. I’m going to be fighting again on April 17th, I forget the guy’s name. But as I say, it doesn’t matter. I just want to fight. I love fighting.”

Q: How is your left arm now, after you had surgery on your elbow. Is it 100 per cent?

C.A: “Oh, the doctor told me it will never be 100 per cent ever again. But it’s a lot better now than it was in the [Bermane] Stiverne fight. It’s around 70 to 80 per cent now. But that‘s boxing, we have injuries and you just have to bite down on the mouth-piece and do what you do.”

Q: Talking about Stiverne, who beat you twice. I guess he is simply your ‘Bogeyman,’ as the saying goes, and styles makes fights?

C.A: “Exactly, man. That’s boxing. You know, my hat goes off to him. He caught me with the exact same right hand as in the first fight, the same one. I was winning the [second] fight, I was in great shape and ready to go the full 12-rounds. But, hey, [I threw] a lazy jab and he got me with the right hand.”

Q: Were you surprised how comprehensively Deontay Wilder outpointed Stiverne?

C.A: “Of course, but I was more surprised by his [Stiverne’s] body. He was 239-pounds against me and the same weight against Wilder, yet if you put both bodies side by side, you could see they were like night and day. That bothered me, with him being a defending world champion and yet he didn’t look like he was in shape, his body was sloppy and I don’t believe he was ready. I think Stiverne felt he was just going to touch Wilder’s chin and he was going to go to sleep. But these are some of the mistakes we can make in boxing.”

Q: Were you impressed with Wilder?

C.A: “Definitely. He had good ring generalship and his jab was like a piston; his [Stiverne’s] face was all swollen from the jab. Wilder did what he had to do and he dictated the pace.”

Q: I know the answer to this question already: would you like to fight Wilder?

C.A: “Absolutely. This year, I told myself, I have to go for broke. I have to do it all the right way. This is it, I have to keep my butt in shape and get that world title or I’m done. I don’t want to be done with boxing, it’s my life, but this is the year I have to get it done. And I want to earn my title shot. I’m not like, ‘Let’s go, Champ!’ (Shannon Briggs). I’m not like that guy at all. If I have to fight four or five more times this year, I’ll do what I have to do to get a title shot. We’ll get the first one done on March 13th, then fight again in April and then hopefully in June.”

Q: You are in a mix of good, exciting contenders. You against Tyson Fury would be a great fight.

C.A: “I like Fury. And I tell you, he’s hilarious. But he can back it up. I don’t care who I fight. I’ll fight any contender in the top-10 or the top-5. I don’t fear anyone. I’ll fight anyone and I don’t just say that, I mean it, anyone. I’d actually like to see him [Fury] fight Wilder. They’re both big guys who talk a lot. I think he’d give Wilder a run for his money.”

Q: And Fury against Wladimir Klitschko, do you give Fury a shot?

Q: It’s Bryant Jennings next for Klitschko. How good a chance does Jennings have in your opinion?

C.A: “I’ve never sparred Jennings but I’ve seen enough of his fights to get an idea of how I think he might do. Hopefully he will put enough pressure on to push Klitschko back to the ropes. But I don’t really see that to be honest. But I give him [Jennings] my best wishes for the fight.”

Q: Happy birthday for March 5th when you will turn 34. That age is quite young for a heavyweight, as they mature later on. You feel you have plenty left in the tank to offer?

C.A: “I know I have plenty left in the tank to offer. And the thing is, I’ve matured. I’m training now at Big Bear and I like it. I used to hate training at Big Bear, it was so boring. But this is work, who cares if it’s boring. This is what I do. I wish I had this mentality five or six years ago. But I was a stubborn knucklehead and I did things the hard way back then, that was my problem. Now it‘s time to put this work in and I‘m enjoying it. This is my make or break year.”