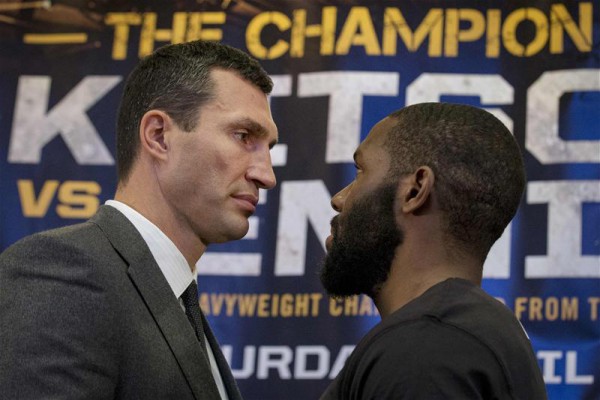 PHILADELPHIA’S Fred Jenkins has been around the sport of boxing for well over 40 years and, after his own boxing career was cut short due to a head injury he suffered, training fighters proved to be his calling. Having learnt his trade from legendary figures such as Milt Bailey and Stan Williams, Jenkins began working with fighters in the early 1970s.

Soon enough, Jenkins would guide fighters all the way to the top. Yet one thing Jenkins has always wanted is a heavyweight champion of the world to call his own. He believes he has found one in unbeaten 30-year-old Bryant Jennings.

Jennings, 19-0(10), will challenge the mighty Wladimir Klitschko in New York on April 25 and Jenkins says he will see to it that the time he has invested in the sport will be paid back in full with an upset victory.

Q: You are known in the U.S as a well respected and knowledgeable trainer. Did you box yourself?

Q: And you have trained top fighters such as Charlie “Choo Choo” Brown and Olympian David Reid?

Q: How does Bryant Jennings rank alongside those guys in terms of talent and ability?

F.J: “Well, to be a good fighter, you have to be a good listener. Bryant is that. Also, from the very first day he walked into the gym, I’ve put him to the test; from the very first day. It’s always been on my mind to train a fighter to fight for and win the heavyweight championship of the world, and because of that, I worked Bryant hard each and every day. I tested him mentally, physically, with the conditions he had to work in – everything. And he passed each test, he’s passed everything.”

Q: A win would make Bryant the third heavyweight champion from Philadelphia, after Joe Frazier and Tim Witherspoon. Is that also on your mind, as extra motivation perhaps?

F.J: “All I’m thinking about is the win, for me and for Bryant. That’s all that matters, the win. We both have invested so much time [in boxing], over forty years from me and five years from Bryant. Bryant is benefiting from all my years of experience and he’s going to put it all together to take this [win].”

Q: Has this fight come at the perfect time for you, or would you have preferred for Bryant to have had a little more time than five years in the pro ring, something some of the critics say he needs to be able to go in with Klitschko?

F.J: “It has come at the perfect time. The critics, what do they know? The critics all praised Klitschko for his last three fights, saying he looked special; so that shows you they don’t know what they’re talking about. Klitschko looked like what he is, an old man. At the same time, there is no disrespect and we want to make it clear how we thank Klitschko for this opportunity. He is the greatest heavyweight today and we’re coming after greatness in this fight. We didn’t want to challenge anyone else, we wanted to go after the best and take the biggest gamble.”

Q: Were you not at all impressed by Klitschko’s last performance, when he KO’d Kubrat Pulev in five-rounds?

F.J: “Pulev stood right in front of him. He was like a heavy bag. We will have everything ready: plan-A, B, C and D. Whatever Klitschko brings to the table, we’ll deal with. If you remember, Bryant fought the two best southpaws in the division, back to back. No [other] management group would have taken that risk. Those fighters (Artur Szpilka and Mike Perez) had no fear, they were unbeaten. Bryant is ready.”

Q: What would you say to those critics who say Bryant is too small to beat the huge Klitschko?

Q: With the reach advantage, do you think you can take away Wladimir’s excellent jab, as tough a task as that is?

F.J: “We’ll either take it away or we’ll work through it. You’ve got to remember, his [Klitschko’s] last three or four opponents, they were right in his face, right in front of him. Back when he was young, Klitschko fought some live guys, but over the last three years, it’s all been handpicked. And Klitschko doesn’t have a master trainer no more, since Emanuel Steward passed away. Emanuel could come up with things that no-one would anticipate, but who does Klitschko have now that can compete with Fred Jenkins?”

Q: What are your thoughts on Deontay Wilder, who is now the WBC champion of course?

F.J: “He’s a good kid, who has put his time in. His team did a good job in picking his fights and when it came for a test, he came through. In terms of how great the [Wilder-Bermane Stiverne] fight was, it was a C-rated fight, but the win is all that matters.”

Q: Is Wilder a fighter you are looking at facing one day assuming you get the big, big win over Klitschko?

F.J: “I don’t want to talk about that right now. All we’re focusing on is the Klitschko fight. That’s all that matters right now. Bryant is training hard. He is the type of guy who, after two days rest [in training camp] his body rejuvenates and he’s right back at it. I’m expecting anything in this fight. Anything can happen. We have to be smart enough to be able to deal with whatever Klitschko brings. We can make any predictions we want but they don’t mean anything. We will have a plan-A, B, C and D. We’re grateful for the opportunity and for it to be in America. When you are fighting the heavyweight champion you have to do whatever and go wherever to win. Tell your readers we’re coming after greatness.”