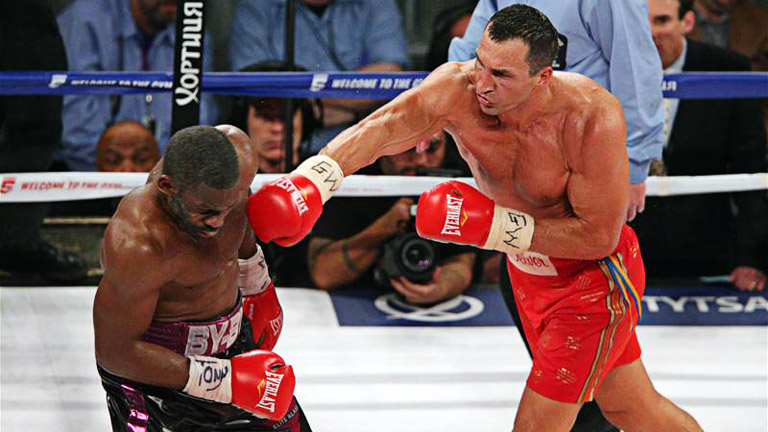 Bryant Jennings has a surprising admission about his fight with Wladimir Klitschko. John Dennen reports from Las Vegas

PHILADELPHIA heavyweight Bryant Jennings had a surprising assessment of Wladimir Klitschko, the former world heavyweight champion who put in a sterling performance in a thrilling war with Anthony Joshua at Wembley stadium in April.

Jennings went 12 rounds with Klitschko in 2015 but he suggested that his own fight with the Ukrainian revealed the first signs that Wladimir wasn’t what he used to be. “Not taking nothing away from Joshua, Klitschko, he’s just not the same Klitschko. He probably wasn’t the same Klitschko when I fought him, but credit due to the victor. Klitschko did good. Joshua still has some growing to do and he’s definitely the future. The fight was good, the fight was definitely exciting. But people are looking at an old Klitschko, even you can discredit my fight with him. It’s the old Klitschko,” the American said in an exclusive interview with Boxing News.

He gave a blunt assessment of how Joshua should approach his looming rematch with the Ukrainian. “Klitschko can’t fight either, he can’t mix it. If they were to fight again, all Joshua has to do is just jump on him. That’s it. Jump on him, touch him a few times, there we go. I see the rematch for Joshua to really up his conditioning, as fit as he looks, I would expect him to be more physically conditioned. Other than that the sky’s the limit,” Jennings said. “He’ll come out more confident and he will do the same thing. Because Klitschko don’t know how to fight. Just mix it with Klitschko. Mix it, close shots, Klitschko likes long shots. Short shots. You see when Klitschko got hit with the uppercut, Klitschko was trying to hold. He was trying to hold and he got an uppercut.

“Just fight him and you’ve got to be 6’ 6” or over. That way it’s not easy for him to crowd you and hold you. I had the right strategy, I don’t think I did enough to get the job done. I came on second half of the fight. But somebody else with the same strategy could definitely do the same thing.”

As a shorter heavyweight Jennings is at a disadvantage compared to the giants of the divisions. But he says, “That just makes it better. The credit is never dished to the one making all the adjustments. The credit is always dished to the person with the most advantages and things like that. Underdogs, we always come out on top, but we’re never respected in the beginning.”

Bryant however hasn’t fought himself since losing to Luis Ortiz at the end of 2015. “The fight definitely happened prematurely but it was something I had to deal with anyway. Even though I took the fight, I believed I could beat him, at that time it probably wasn’t the best thing for me to do, especially coming off of another fight… I’m not making no excuses about it. Once I get back to that point we’re definitely going to fight again. We’re definitely going to fight again,” he said. “It’s been 18 months but the game comes with some obstacles and some breaks. You’ve just got to stay strong within those breaks and stay focused.”

“Mentally doing good, physically doing good” he’s planning on working his way back to the heights of the heavyweight division. “There’s a lot stirring up but there’s not a lot going on. Just a lot stirring up. There ain’t s*** going on because no one’s really active… Before [Joseph] Parker when was the last time Andy Ruiz fought? Who is in the top 10? Who are these dudes? Are they really credible or is the game in such decline that we just have to reward who we have to reward and just move on with the game? It’s really not where it should be,” he reckoned. “It could definitely be something good.

“Make the fights, tell them, ‘You fight now or nothing, leave, bye, see you later.’”

He didn’t specify whom he wanted to work his way towards, merely saying, “I’m only worrying about progress, consistency and success.”