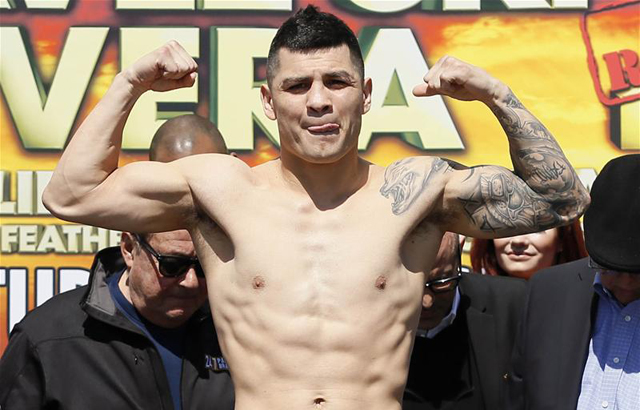 TOUGH and experienced campaigner Brian Vera, 23-9(14) will face unbeaten Liverpudlian Rocky Fielding in the summer and the 33-year-old warrior is once again looking forward to a hard, exciting fight. Coming off a points loss to the slick Willie Monroe Junior, who, Vera says, “ran all night,” the Texan is expecting a battle far more conducive to his fighting style against Rocky.

Firstly, how much do you know about Rocky Fielding, which of his fights have you seen?

He’s a good fighter, tall and long. He sparred Andy Lee and he told me he’s pretty good. But I feel I’ve got the experience and I feel stronger at 168-pounds. I do well against tall guys. I’m expecting a tough fight but this is the type of fight I need to get back in the mix.

Have you seen any of his fights, or just highlights?

My manager has two of his fights and I’ve seen bits of him on YouTube. He’s good, he keeps it long. But I feel he is still a little green.

You have no concerns about him possibly being too big or strong for you – he once came in as a light-heavyweight almost, having failed to make the super-middleweight limit?

I’ve fought quite a lot at 168 and I’ve sparred guys at 168, and I’ve done pretty well there. And I’m older now, so making middleweight was too hard. It’s much better for me, making weight at 168. And if he’s had trouble making weight, it might be better for me, if he has to cut [a lot of] weight to make this. But I’m sure he’ll be ready.

His team have called you “the perfect test” for Fielding. You plan to tear that script up, though, with you not being his stepping stone so to speak?

Yeah. Sometimes that works, like my last fight, against [Willie] Monroe [Junior], he beat me by decision and now he’s got a big fight with [Gennady] Golovkin. But he just ran around the whole fight. I need a guy to stand and fight with me to allow me to use my advantages. That’s what I think he’ll [Fielding] do with me as he’s a tough guy.

Do you give Monroe Jnr any shot against GGG?

Well, anybody who gets in there has a shot, but I think he’ll have to run a lot more than he did against me [laughs]. He is slick and hard to hit, but no, I don’t give him much of a chance if I’m honest with you.

Have you been in training camp pretty much since that January fight with Monroe?

Yeah, I always stay in camp. I knew something would come up and I’m itching to get back in there. I’m not getting any younger and I want to get as many big fights as I can.

You are never in a bad fight and Fielding has been in some entertaining brawls. But he has boxed more recently, using his height and reach. Are you planning on turning it into a war?

Not a wild war, but I definitely want it to be a fight, the kind where the fans get their money’s worth. I’m not looking to go crazy in there. I know I’ll need to get inside and bang him up.

You had two big fights with Julio Cesar Chavez Junior, the first fight plenty of people felt you had won…

Yes, sir, I felt like I had won that one.

Were you surprised when Chavez Jnr lost and even quit against Andrzej Fonfara just recently?

Not really, because he picked a big guy, a light-heavyweight who had beaten some good guys. I’m not sure why he did that; especially after a one-year layoff. I guess that is what can happen if you take the sport lightly.

Will this be your first time in the UK?

Yeah, I flew through once, but this will be my first fight there and I’m excited.

You have been a pro for almost 11-years. At age 33, how long do you plan of boxing on for?

I told my brother and my manager that I still feel good and that age has not caught up with me. I have a couple more years. Obviously it would be real bad to go out with any type of injury, especially a brain injury. But I still have my wits about me and I talk well. I feel good. I have a couple of years, during which I’ll give it all I’ve got and try and make things happen.

TO LISTEN TO THE LATEST BOXING NEWS PODCAST CLICK HERE