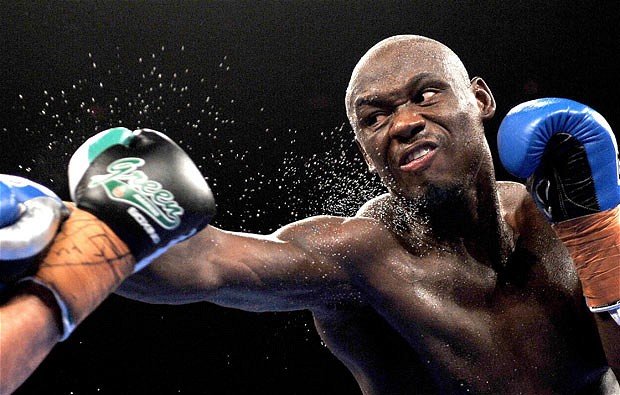 FORTY SIX former light-heavyweight king Antonio Tarver returns to action as a heavyweight against Johnathon Banks on December 13 (a fight that was postponed back in September) and Tarver feels his third bout as a heavyweight will lead to much bigger things.

Currently 30-6 (21) the skilful southpaw is convinced he will defeat Wladimir Klitschko and become heavyweight ruler, as is his “destiny.”

Q: What do you think of Johnathon Banks, what does he do well and what type of challenge will he pose to you?

Antonio Tarver: “First of all, I have a great deal of respect for Johnathon Banks. He is a talent, he came up through all those years at The Kronk Gym, under the tutelage of one of the great, great trainers Emanuel Steward. So he’s close to the cloth. He knows his way around the ring, probably better than any of these other heavyweights that are out there. It all depends on which Johnathon Banks shows up. If he’s determined and focused, he can pose problems to anyone. But if not, if he’s distracted in some way, then he won’t be the Johnathon Banks he can be. But whenever Antonio Tarver is across the ring from you, you will make sure you are 100 per cent focused.”

Q: How is your thumb, that was hurt and caused the postponement of this fight back in September?

A.T: “I want to believe it’s 100 per cent. I’ve done lots of sparring and I’ve had no issues, so I don’t think I’ll have any problems. But I spar in 16oz gloves and it’s a lot different hitting someone in the head with 10oz gloves on, so you never know. But we’re not going into this fight second-guessing anything.”

Q: Some critics say Banks is a better, more focused trainer than he is a fighter. He hasn’t boxed for a year and a half…

A.T: “And neither have I. My career, pretty much for the past four or five years, I’ve had a big layoff and have been inactive. But I’ve got to take the chips where they fall. But Banks, can you think of a better place for him to be, day after day, than next to the world heavyweight champion. Come on, are you kidding me! What better place is there than to learn from the great Wladimir Klitschko! You can’t tell me that all that strength and conditioning work, all that experience, all those facilities, is not helping Johanthon Banks become a better fighter.”

Q: It is your goal to win the world heavyweight title as we know. Tell the fans how you will defeat Wladimir Klitschko.

A.T: “My whole thing is, this is my destiny. You can’t go against fate, you just know it. I believe I will become heavyweight champion and I won’t stop until I achieve it. It is my destiny. I’m telling the world I’m gonna do it, just like I did when I said I was going to knock out Roy Jones. I don’t know how I’m gonna do it and I’m not telling the world I’m ready for Wladimir Klitschko today. But I’m coming, I’m preparing for when that day, when that fight comes. And I believe I have everything to beat Wladimir. He doesn’t like facing southpaws. I can frustrate him. I know that what he wants to hit me with, he won’t be able to hit me with it. And each time he misses, I’ll be coming right back at him with shots to the body. It will be a great, momentous night of boxing that night. It will be a real life Rocky movie. I’m Apollo Creed and he’s Ivan Drago, but this time the Russian gets his ass kicked.”

Q: What do you think of the current heavyweight landscape, with a number of young fighters making their mark?

A.T: “The division is hot and they’re good fighters, but they need to take that step up. They’re not doing that and it seems like they’re protecting their records and not risking getting beaten. It’s a different era to my era. Once I’ve beaten Johnathon Banks I’ll move on. That night [of the Banks fight] you will see me change the heavyweight landscape right before your eyes. Antonio Tarver is a heavyweight who is here to stay. I have the speed, the power and the brains. Boxing has never been about how big you are or how strong you are. It’s a bout what’s between your ears. Now I’ve gained a few pounds and I’m a solid 225-pounds. I’m letting my hands go in combinations and I dare these [young] guys to hit me with their best shot. The only way they can beat me is to knock me out. I’m going to change the face of heavyweight boxing in the coming two years.”

Q: How impressed were you with Klitschko’s KO win over Kubrat Pulev?

A.T: “It was a good fight, but he [Pulev] was limited. How could he fall for the same punch [the left hook] four, five, six times? He had no experience, no boxing IQ. It was easy pickings for him [Klitschko]. Let him fight someone who has the experience, who has been a world champion, who has the Olympic pedigree. Let him fight Antonio Tarver.”

A.T: “If Wilder and Stiverne ever do fight, and I have doubts (laughs), it could go either way. But long haul, you have to lean towards Stiverne. He’s more solid and his chin looks like it will probably hold up. With Wilder, it’s still smoke and mirrors, the jury is still out on him. He has power, but aside from that, I don’t know what Deontay Wilder has. If he gets past Stiverne, he is a solid heavyweight, but still one with limited skills. We’ll see in this fight what he has between his ears. I don’t know at this point. In fact, the only heavyweight with complete skills aside from myself is Wladimir Klitschko.

“With Tyson Fury and Chisora, I see that as a toss-up. I know Fury is confident and he wants to replicate his earlier victory. I think he will win again just as long as he doesn’t get hit with something stupid.”

Q: Would you like the idea of coming to the UK to fight Fury or Chisora?

A.T: “That fight [Vs. Fury] would be the biggest ever fight for the UK. I don’t care how big he is. In fact, I need someone to give me the good look that I need to prepare me for Klitschko. That fight would be perfect for me. I’m willing to sit down at the negotiating table and make that fight. I have no problem fighting abroad – I’m 1-0 with one KO abroad (beating Danny Green in Australia back in 2011). I want world champion to mean just that: I’ll fight in anyone’s back yard.”

Q: I must ask you about your role in “Rocky Balboa.” You were great as Mason Dixon. Is more acting a possibility for you?

A.T: “Of course. I did a helluva job in Rocky Balboa, and the fight scenes were the most realistic of the series. Those fight scenes were close to greatness I think. He [Stallone] wanted that realism and it took great skill from myself and him to get that done. I’ve reached out to him about being on set as a consultant on (new Rocky spin-off) ‘Creed’, but I haven’t heard back yet. We had our differences, but I’ve been humble enough to reach out to him and he has to be humble also. In a way, boxing is theatrical anyway. You have to reinvent yourself for each opponent. I’ve been around boxing nearly all my life and that’s why what it looked so natural in front of the cameras. Like I say, I’ll lend my expertise and I’ll talk to the boxers on the set of ‘Creed’ if he wants that. Can ‘Creed’ be as good as Rocky Balboa, I don’t know.

“But I want to do more acting in the future. Right now, though, I’m putting the finishing touches to my boxing career. This great book of my life is nearly complete, this is the final chapter, and it will be the icing on the cake going out as world heavyweight champion.”

For the full Pacquiao-Algieri preview don’t miss this week’s issue of Boxing News, available via our app on iTunes and Google Play.