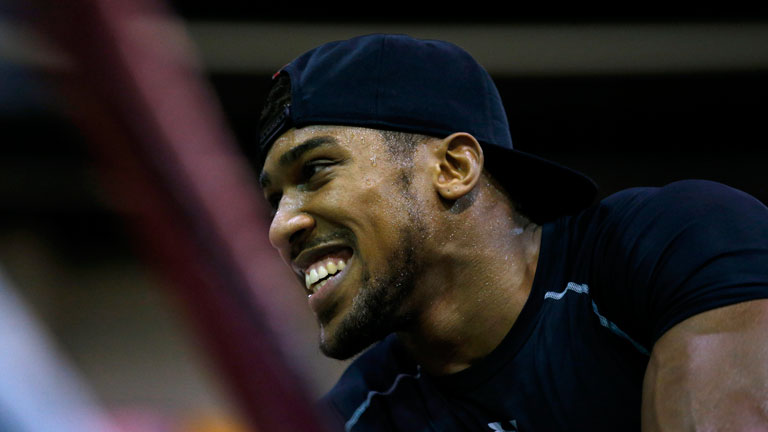 “Very interesting,” Joshua reflected afterwards, “entertaining, it shows the type of person he is, brute, from a rough and ready background and that’s what boxing needs. It needs characters like him.
“But you know talk is cheap. Talk is definitely cheap. All jokes aside, talk is cheap and he can say all these things but I’m sure I’ll be fine.”

The Dillian Whyte fight will be the first time Joshua headlines a pay-per-view. It’s come at an early stage in his career, a mark of his star power even though it means his fight will be seen by a smaller potential audience. “If it wasn’t pay per view, I wouldn’t mind. I’m getting paid to fight now. That’s unbelievable. I would do it for free and that’s no word of a lie,” he said. “This is a great position to be in.”

“Even though it is behind a pay wall, it’s not much, £16.95, four of you come together that’s a pint in a pub. I’m sure people go through seven or eight of them,” he added with a laugh. “If people can’t watch it from home, they’ve got guys like Boxing News to follow, radio, Boxing News live blog, it’s free so they can follow all of these things. It‘s a really good time to be involved in sport. It‘s pay-per-view so be it, there‘s other options.”

He anticipates returning to action soon next year. “I would like to do February or March. But who knows?” he said. “But even though I’m not fighting I think I’ll definitely tick over, just look after my body.”

The ultimate goal for any rising heavyweight is new world champion Tyson Fury. While that might be while off, there‘s no harm thinking of how to fight the top man in the division. “Double jabs, slipping jabs. When I really looked at it, I said Tyson Fury’s Muhammad Ali-esque, the way he was moving. When you at it again, he was dancing around, feinting. I think you need to slip shots, it’s very, very important, and double up your jab against someone a bit taller than you,” Joshua said.

The Olympic super-heavyweight gold medallist is tall too but as a pro has shown he’s prepared to go forward and attack the body. “Even though you’re tall, it’s good to be able to box at range but sometimes boxing isn’t how you predict it. It’s not always going to be rangy ‘jab, jab, right hand, jab’, sometimes you need to learn how to slip a shot, throw a hook, uppercut. Even though I’m tall with someone like Fury I wouldn’t try to stay on the distance and outbox him. I’d be a bit more rough and ready.”