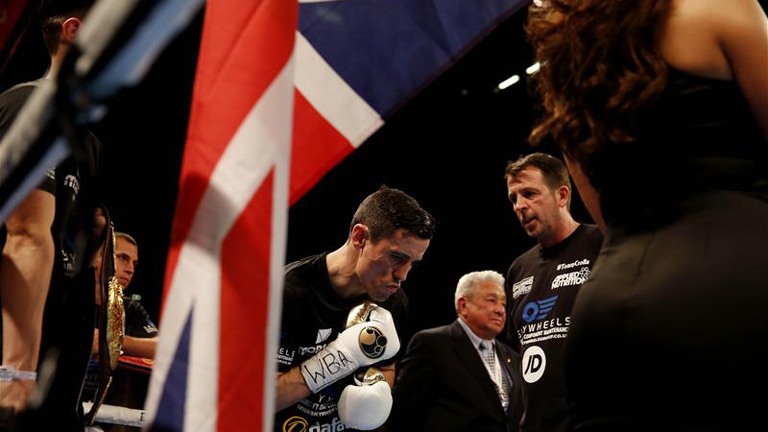 “I’ve been ticking over in the gym. I’m in a good place now for when camp starts,” Crolla told Boxing News. “It’ll be a good fight between us. I’ve got a lot of respect for Ricky. A good fighter.

“I’m in a good place now for when the hard work starts.”

Crolla has brought the Scotsman down to his weight, 135lbs, and to his hometown, they will meet at the Manchester Arena on October 7. Anthony believes he can put himself back on course for another world title shot. “I know that I’m only potentially a few fights away from fighting for a world title again. Obviously I’ve got to make sure I win. But I feel good. I feel that I’m a better fighter for the last two fights. Certainly I think I’m still improving and I look forward to being out,” Crolla said.

Fellow Englishman Luke Campbell challenges Crolla’s old rival Jorge Linares for the WBA world title in Los Angeles in September. “It’s a good fight. Obviously myself and Luke, very different stylistically. I was speaking to Luke when he beat Darleys Perez and I was saying Luke’s very good at long range, a southpaw. He’ll ask Linares different questions to what I tried to ask him. As a fighter Linares, it certainly felt like it with me, he’s boxing as well as he’s boxed throughout his career. It’s over in LA. It’s not really home advantage,” Crolla said. “It’s an interesting fight. You’ve got to make Jorge favourite and you’ve got to lean towards him for his experience at the top level. But it’s a fight I’m really looking forward to.

“Skillwise I think Linares is up there with any fighter pound-for-pound.”

“[Luke] has had the one hiccup but he’s looked very good other than that. He’s had some good wins himself, Perez, [Argenis] Mendez, that was a good win. I can think of a lot more fighters who got world title shots who hadn’t accomplished what Luke had. He does deserve his world title shot. He lives the life,” Crolla continued. “He makes the sacrifices. I certainly do believe that he deserves a world title shot. I look forward to his fight with Jorge.”

Crolla might even cross paths with Campbell one day. “If Luke manages to beat Jorge, I know it’s a tough ask, but if he manages to do that, both with the same promoter, I’m sure there’s a great chance it could happen,” he mused. “I’d struggle to outbox Luke long range, I’d have to rough him up but I can be smart as well myself and I would have to be if we ever met.”