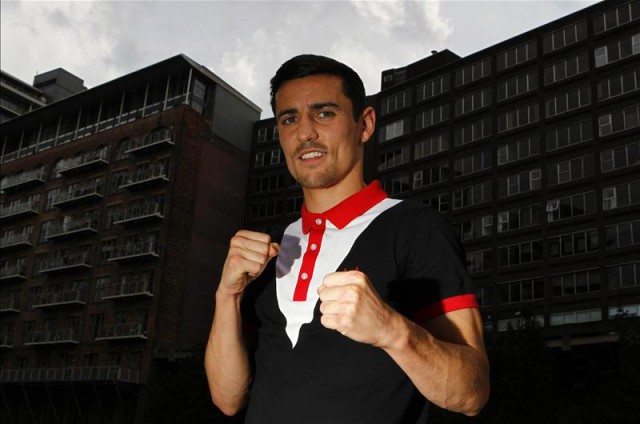 ON January 23 Anthony Crolla should have realised a dream, fighting for a world title in the Manchester Arena in his hometown, against WBA lightweight champion Richar Abril. But in December, he heard a disturbance in his neighbour’s house. Crolla confronted the burglars and was struck over the head with a concrete block. He not only fractured his skull but broke his ankle as he fell. It ruled him out of his world title fight and left many wondering if he’d ever fight again.

What’s the rehab you’re doing at the moment?

I’m starting physio. I’ll be able to do a little bit of pool work. Maybe running in the pool, getting the movement back, obviously swimming. Low impact on the foot, I’ll do a bit of cycling in the next week as well. That should all work out well. That’ll help ease the chance of recovery.

Is your ankle still in a cast?

No, I was meant to stay in a cast for another two weeks but Mike Hayton, who does a lot of boxers’ hands, he put me in touch with a top ankle specialist and I can’t thank Mike enough for that. He’s looked at my X-Rays and had further X-rays and he thought it would be good to get me out of the cast now and start getting a bit of strength back in the ankle and the circulation, because it stiffened up.

I can do little bits of upper body stuff. Over Christmas there’s only so many selection boxes you can eat, sat on the couch with your foot up and there’s only so much television you can watch… Don’t get me wrong I gave it a good go.

What’s the situation with the head injury?

That’s the most serious thing, the fracture to the skull. Even when my ankle’s getting back to full strength and I’m getting back in the gym, I won’t be able to spar or anything like that for a while yet. Before I start sparring, I’ll have another brain scan. I’ve got no worries, I know I’ll be fine. When it comes to it on the day, you’ll have bits of doubt but I’ve been told it’s going to be fine and stuff like that. There’s no bleeding on the brain, which was a massive thing for us because that would have meant the end of my career. First all of all I’m really looking forward to getting back in the gym. I’m not too sure when that’s going to be just yet. It’s going to be a lot quicker than what people first expected.

I’m counting down the days until I get back in the gym but I know that rushing it will only delay me even further.

How are you feeling in yourself?

I’m very positive about it. I really am. The last few days I had the scans looked at, I’m healing really well, I feel a lot better about that.

I knew I did anyway but I realised how much I love the sport and how much a part of my life it was. To get back in training the lads, training the kids and stuff, it is brilliant to be back in amongst it.

Has it made you think about what you’d do if you weren’t fighting yourself?

I’ve not thought about it yet. I don’t know what I’d do. I couldn’t imagine not being able to go to the gym. I’m so used to being active. I wanted to get in and help train the kids and I couldn’t do that. But I’m able to go in a bit now and help out a bit there and I went and saw the lads at the gym the other day for the first time. Some of them had come and seen me anyway but it was great to be in that gym atmosphere again.

What do you make of all the support you’ve received?

I couldn’t believe it. I was genuinely humbled by it and took back by it. Boxing, I think it’s one of those sports where something happens and everyone pulls together. In worse incidents than mine you see how people pull together.

When it happened the amount of messages I had… I couldn’t believe it. It was from all sorts. People I’ve looked up to, people I’ve trained alongside, from some of the best boxers in Britain to amateur kids around the country. It meant a lot to me. I can’t thank those people enough because it meant the world to my family as well.

How depressing was it, it would have been a dream fighting for a world title in Manchester?

I was heartbroken, I really was. I got told it might not seem it but I was actually very lucky. Boxing seems everything to me sometimes. Family comes first. My little boy, without sounding too dramatic, he could have been left without a dad. I could have been in a lot worse shape than I actually was.

I couldn’t have better people around me. I really believe I’ll work hard to get this chance again and something will pop up like that.

I was in the hospital and when I was getting pushed to theatre I saw some older people and they were very ill. Without sounding too morbid, I thought there’s some people who are going to lose a parent or a grandparent in the next few days. It put things into perspective. I’ve had a bit of dream taken away from me but I look at it like this, it’s just been put on hold.

Derry Mathews will get to fight Richar Abril, what are your feelings on that?

I genuinely wish Derry and his team all the best for it. It’s a tough fight and no doubt Abril starts favourite, he was favourite with us, but Derry has got a good team around him and one thing I know better than most, he’s certainly got a puncher’s chance in there. If he gets his tactics right on the night and a few things go his way, he’s capable of getting the win, definitely. It’s a tough fight but he is capable of becoming a world champion.

If he wins, you could have your trilogy fight with him for a world title.

That would be great. I’m rated high with the WBO as well. Who knows, I might even be able to go that route. I know it sounds a bit far-fetched but you wouldn’t rule out a unification. But at the minute, I do wish him the best. Who knows? I just want to get back in there in a big fight, whoever it may be.

What happened when you confronted the burglars?

I’d come home from the gym. An alarm was going off, so I rang my neighbour. I said, ‘I don’t think you’re being burgled but I’ll check the back anyway.’

The other burglar who’s climbing the wall, one of the concrete slabs was loose. He threw the concrete slab down on my head. So it came from a bit of a height as well. It’s one of them, I was never unconscious or anything. As I went down, I went down on one knee. Straighaway I knew what I’d been hit with. I’ve been hit hard in my career. I’ve not been hit that hard. I knew that wasn’t a punch. I bounced back up after a second or two. I knew my ankle was gone then.

Do you wish you hadn’t run after them?